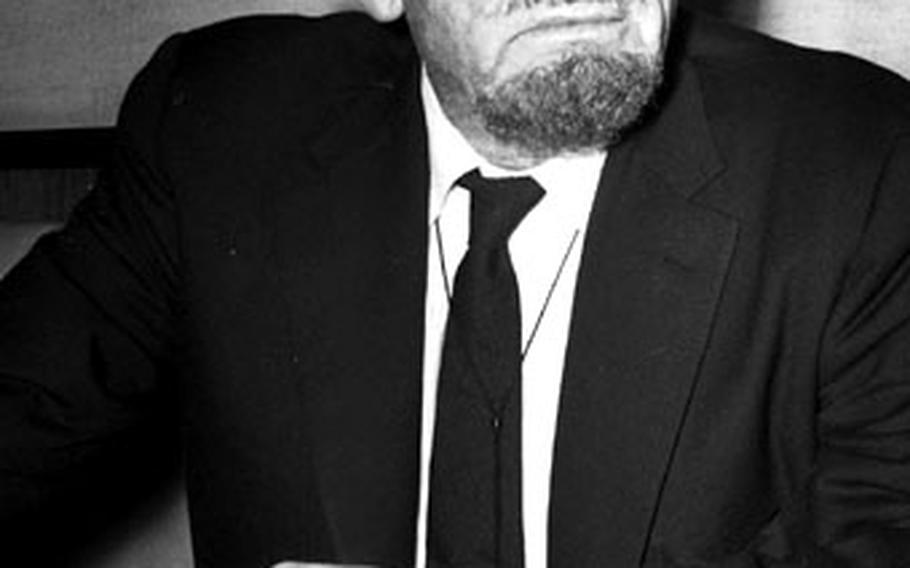 Buy Photo
John Steinbeck, winner of both the Nobel Prize and the Pulitzer Prize and one of America's most revered authors, discusses his recent trip behind the Iron Curtain during a stopover at the Frankfurt airport in December, 1963. (Joe Schuppe/Stars and Stripes)

"All the old hangouts &mdash; Tim Costello's, the Algonquin, the crummy little Sixth Avenue bars with draft beer &mdash; either the admen from Madison Avenue have moved in or they're now necktie stores

"And the old crowd &mdash; Fitzgerald, Benchley, Thurber, Hemingway, Lardner &mdash; they're all gone. I don't really know anyone of the old bunch in town.

"They're all dead, I guess," the burly bear-like, 61-year-old novelist said thoughtfully.

Steinbeck paused for a chat at Frankfurt International Airport as he was winding up a two-month European visit. most of which was spent behind the Iron Curtain. He smoked a thin cigar and sipped Polish vodka as he rambled.

The vodka was a "souvenir of Poland &mdash; people always bring me bottles at airports," he said, Yes, he had toured the Iron Curtain countries, but he didn't want to talk about it too much. Was there a book in the works on his travels, perhaps following his successful "Travels With Charley," which told of his wanderings about the United States in a truck-trailer with his dog?

Steinbeck, who is usually happy to talk about anything at any time, didn't want too discuss the matter.

"If you talk about books, then you think you've written them, and if you think you've written them they never come out," he said. "And besides, I'm tired right down to the bone." He had been jumping in and out of airplanes all day in an attempt to get from Prague to West Berlin. Most airports were fogged in, so he had to follow a roundabout route from Czechoslovakia to Belgium to Frankfurt, then on to Berlin.

"We've been on the move for two months, living in hotels and jumping from this to that. Your endurance seeps away after a month, and you begin to miss things. Little things irritate you.

"For instance. it was wonderful to come to Germany and not to have to worry about a visa or strict money controls or long forms &mdash; just get off the airplane, show 'em your passport, agree that you're not a smuggler and walk on in."

Returning to the subject of New York City, Steinbeck said that he doesn't wander about the city as much as he did before the war. "I live on Long Island, out a ways, and I make it to the city now and again. Believe me, when I get home this time I'm going to hole up and pull the world up over me like a blanket."

The present American literary scene is not grim, however, he said. There are "lots of good authors" at work today.

"There must be dozens," Steinbeck said. "Take Edward Albee (author of the recent Broadway hit, "Who's Afraid of Virginia Woolf?") for instance. He's been travelling with us on this trip &mdash; he's still behind the Iron Curtain somewhere He's simply great, going his own way at his own pace.

"And then there's the guy who did that great war novel, "Catch 22." Joseph Heller, that's him, You've read it? Go back and read it again; you'll find there's a whole second book there you missed first time around. Why, it makes Mailer look like kid's stuff.

"But one thing I don't know is where the good young short story writers go today. They've got to go to The New Yorker or bury themselves it a glossy fashion magazine where they're just a sort of parsley on the steak.

"Television undoubtedly did a lot toward killing off the short story market. No, I don't watch TV very much. It's just not my sort of thing," he said.

His first big success was "Tortilla Flat," warm study of bums and a biologist in California near his Salinas home; he won the Pulitzer Prize in 1940 for his monumental study of the Depression, "Grapes of Wrath."

"My best book? I really don't know. I never go over them again after they're out. I keep hoping that my next will be the best."

Discussing his trip through the Red bloc, during which he visited Czechoslovakia, Poland and the Soviet Union, Steinbeck said that things have opened up tremendously since his last visit.

"There's a certain amount of freedom &mdash; of sorts &mdash; that you can feel nowadays. The Poles are particularly argumentative with the official line. But they've still got a long way to go," he said.

"They didn't print a word about the arrest," Steinbeck said scornfully, sipping at his vodka. "All the Russians knew was a line and a half in Izvestia which merely said the American professor was leaving the Soviet Union."

Steinbeck, who was in Moscow during the incident, said he called a press conference on the matter because he was "mad as hell."

At his Moscow press conference, Steinbeck said, "I don't know why they arrested him (Barghoorn). They should have arrested me. I don't know what espionage is. But I have asked more questions and have covered more country" (than Barghoorn).

Steinbeck angrily denounced the arrest as an "irresponsible act" by the Soviet government. He said, "If this thing is not resolved &mdash; by trial or his release &mdash; I would feel reluctant, I would feel afraid to come back."

'That press conference shook 'em up, I think," St:einbeck said. "They didn't know how seriously we were going to take it. I think it was all the work of some middle-level bureaucrat who was taking his own propaganda seriously and decided to make some points with the big boys."

Then a loudspeaker blared and Steinbeck rose to board his plane. He gathered his cane, wicker baskets of vodka and vivacious wife, Elaine, and headed for the door. He stopped, turned and came back to the table.

"One last vodka for the air," he said, his eyes bright in his massive and weathered face. "Good stuff," he said tossing off the last swallow. "Does the job in a hurry and leaves you OK for the next day."