Traveling reps to focus on benefits at briefings 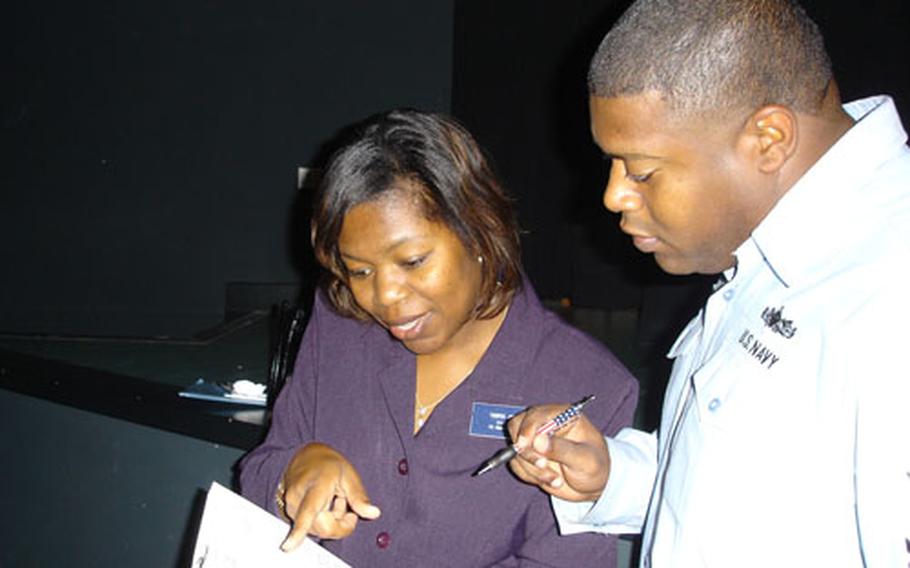 Overseas Military Specialist Coordinator Tan Johnson answers a question from a Petty Officer 2nd Class Nashid Dickerson, a sailor in Naples, Italy, during a brief sponsored by the Veterans Administration this month. VA representatives will visit other bases in Europe in mid-October. (Lisa M.Novak / S&S)

NAPLES, Italy &#8212; Representatives from the Veterans Administration will resume briefings for separating servicemembers on bases in Europe in mid-October.

The briefings, for which the exact dates still must be set, will be part of bases&#8217; Transition Assistance Program sessions.

The VA just wrapped up a series of briefings in Italy aimed at educating servicemembers on the benefits they can apply for once they leave the military.

Overseas Military Specialist Coordinator Tan Johnson covered many of the benefits available, including Montgomery G.I. Bill educational funding and the VA Home Loan Guarantee. But she said it&#8217;s the medical disability benefits that generate the most interest, and require the most attention.

&#8220;The most important thing I like to stress is the need for accurate and complete information. We can only work with the documentation the military provides us. It&#8217;s a must to keep all medical records up to date. Nobody is going to care for you like you will,&#8221; Johnson said. &#8220;I work for the VA, and I still find things I&#8217;m qualified for. There are constant changes that can affect a person&#8217;s status. It&#8217;s important to keep up.&#8221;

For those whose service can be measured in decades, Johnson stresses the need for an accurate and detailed medical review.

Navigating through potential compensation issues can be tricky, she warned. For example, elective surgeries aren&#8217;t normally accepted for a disability claim, but circumstances may dictate an approved claim. Another issue that has generated a great deal of interest and confusion over the past few years is concurrent receipt. In 2004, the VA began paying separate disability compensation to retirees rated at greater than 50 percent disability.

&#8220;The bottom line is if someone is diagnosed with any ailment while on active duty, they should claim it and let the VA determine whether it is service-connected or not,&#8221; Johnson said. &#8220;People listen to gossip from sea lawyers and barracks lawyers who don&#8217;t understand the system. They only know just enough to be dangerous.&#8221;

Other advocates are also available at the briefings, including the American Red Cross, American Legion, and Veterans of Foreign Wars.

For more information on VA benefits, consult the Web site at www.va.gov. Check with your Family Service Center for details on the October briefings.