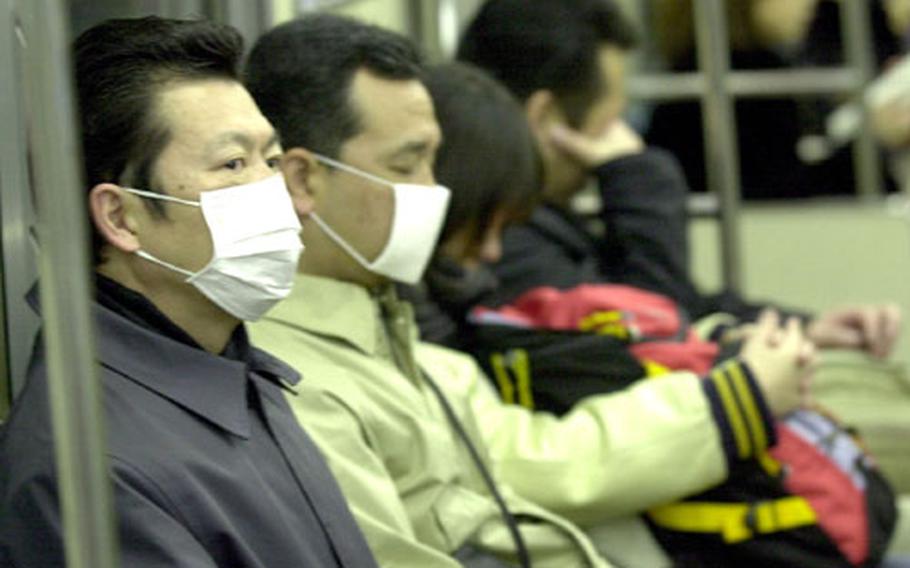 Travelers to Asia are being warned about an outbreak of SARS, a mysterious illness that has killed at least nine people and made more than 200 others critically ill.

&#8220;Our doctors have been briefed on the issue and are alert for possible symptoms,&#8221; said Amanda Woodhead, public affairs specialist for the U.S. Naval Hospital on Okinawa.

A Japanese medical team was sent to Vietnam to help that country fight the infectious illness, known as severe acute respiratory syndrome, or SARS.

In Vietnam, 29 hospital staff members were infected with SARS after a foreign national was admitted Feb. 26 to a hospital in Hanoi with the symptoms, the World Health Organization said.

The federal Centers for Disease Control and Prevention is distributing cards at U.S. airports receiving flights directly from Hong Kong. The cards warn travelers returning from Hong Kong; Guangdong province, China; and Hanoi, Vietnam, that they may have been exposed to cases of SARS.

The cards advise travelers to monitor their health for at least seven days and to contact their physicians if they become ill with a high fever accompanied by a cough or shortness of breath.

Japan&#8217;s Ministry of Health this week designated hospitals in each prefecture to handle SARS patients but reported that just 12 hospitals in nine prefectures now meet World Health Organization guidelines to prevent spread of the disease.

As a precaution, Japan&#8217;s Ministry of Health began broadcasting announcements at international airports and ports throughout the country to alert travelers to the danger. At the Korean National Institute of Health, the Department of Infectious Disease Control issued a news release to educate the Korean public about the danger.

Concerned about the increase of SARS cases in the Far East, the U.S. Pacific Command in Hawaii issued its own warning Wednesday to commanders and service members stationed in the Asian-Pacific region.

The PACOM message advises the Pacific military medical community to watch for SARS symptoms and offers care providers guidance for treating and caring for patients afflicted with SARS.

The symptoms of the disease are not much different from those of severe pneumonia, said an infectious disease expert at Japan&#8217;s National Institute of Infectious Disease in Tokyo.

&#8220;The alarming fact is that it appears to be spreading in the region and transmitted from one human to another through coughing, sneezing and other contact of nasal fluids,&#8221; said Kiyosu Taniguchi, director at the institute&#8217;s First Department.

If the disease spread only through close contact with victims, it could be contained within the infected areas, he said.