Travel restrictions may end soon, but alcohol ban to remain 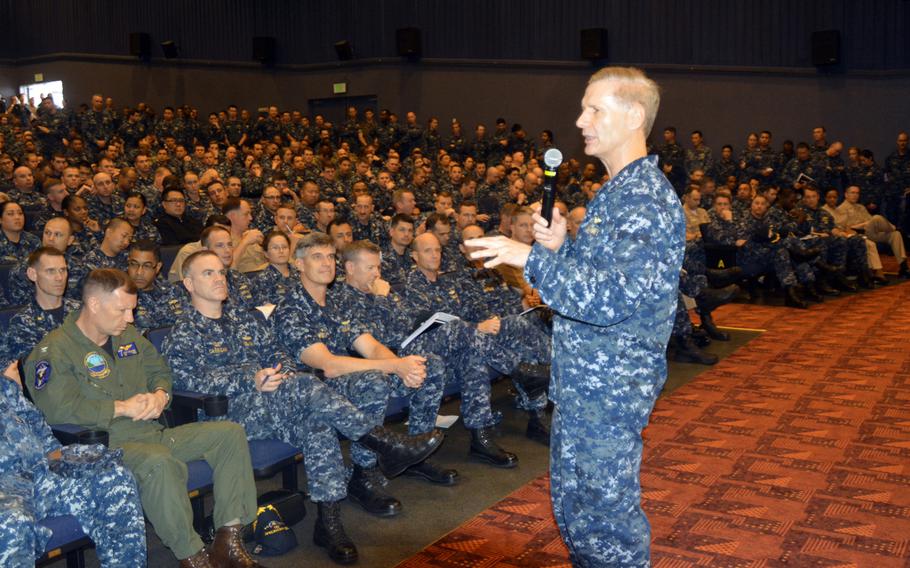 Vice Adm. Joseph Aucoin, commander of the Navy's 7th Fleet, talks with sailors about recent restrictions on liberty and alcohol consumption during a meeting at Yokosuka Naval Base, Japan, on June 7, 2016. (Erik Slavin/Stars and Stripes)

Vice Adm. Joseph Aucoin, commander of the Navy's 7th Fleet, talks with sailors about recent restrictions on liberty and alcohol consumption during a meeting at Yokosuka Naval Base, Japan, on June 7, 2016. (Erik Slavin/Stars and Stripes) 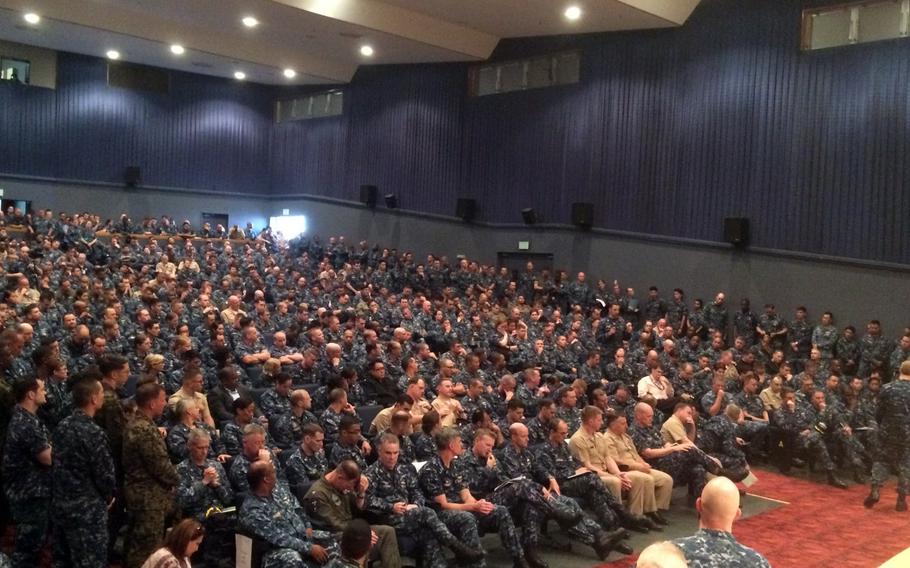 Sailors listen as 7th Fleet commander Vice Adm. Joseph Aucoin talks about recent restrictions on liberty and alcohol consumption during a meeting at Yokosuka Naval Base, Japan, on June 7, 2016. (Erik Slavin/Stars and Stripes) 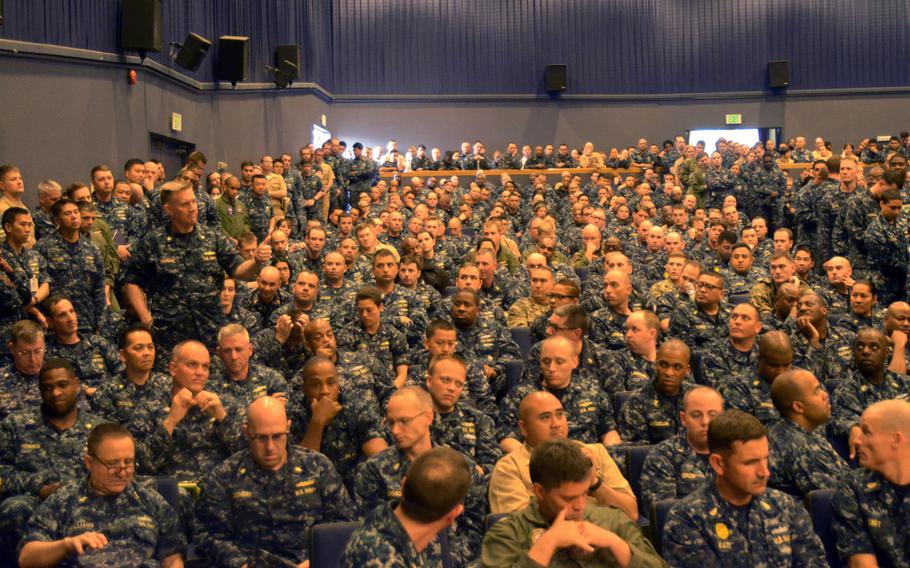 Sailors packed into the Fleet Theater ask questions about new restrictions on liberty and alcohol use for sailors in Japan, at Yokosuka Naval Base on June 7, 2016. (Erik Slavin/Stars and Stripes)

The Navy announced the restrictions Monday after a “negative trend” of incidents involving alcohol, some of which forced President Barack Obama and other senior officials in recent weeks to divert time from other issues to apologize to Japanese leaders.

“I’d like to lift this fairly soon, once I’m confident everyone that’s connected with the Navy understands what the ground rules are, and hopefully behaves accordingly,” Aucoin told Stars and Stripes after the all-hands call. “And if they don’t, they understand the consequences of that. That is why we’re doing the remediation … some of us aren’t getting it.”

At the all-hands, Aucoin cited several recent examples of arrests to sailors, some of which have garnered national Japanese media coverage and required public apologies. They include a 7 a.m. fight at a Tokyo massage parlor, which resulted in the arrest of an officer’s spouse; a DUI arrest where a sailor crashed into a taxi near Sasebo Naval Base; and a sexual assault of a Japanese woman in Okinawa, where the sailor has pleaded guilty.

“What put us over the edge was this weekend with the DUI [on Okinawa],” Aucoin said.

All of the recent incidents involved alcohol, Aucoin noted.

“The alcohol [ban], that one is going to be longer,” Aucoin said. “Collectively, our leadership needs to look at it. If I had to say how that is going to be resolved, it’s probably going to be some kind a stair-step process.

“It would be nice to lift it up gradually and make sure that we have good rationale why we lifted it.”

A liberty card program — where sailors are issued cards that define their off-base privileges — is a possibility, as is a mandatory buddy system when drinking, Aucoin said.

Aucoin and Carter emphasized that the restrictions aren’t meant as a punishment.

However, some sailors at an all-hands meeting of senior enlisted sailors and officers told the admirals that it felt that way, during an hourlong question-and-answer session.

A chief petty officer said he understood the intent of the restrictions, which bans sailors from drinking anywhere, including in their own homes. He then railed against lenient treatment of the small percentage of sailors who break laws.

“When I got home last night, I really got bothered because it was the first time in my entire life that what I do in my home was controlled,” the chief said.

Carter called on unit leaders to look closer for potential problems before they happen, including at sailors involved in alcohol-related incidents who still had liberty rights prior to the new orders.

When leaders find problems, they need to find the right mix of discipline and help for sailors to deal with their problems, Aucoin said.

Both admirals called for civilians and sailors to take preventive measures when they see potential trouble. However, a chief warrant officer said many sailors don’t get involved, because too often they get rounded up with troublemakers if they try to break up an incident at a bar.

“If somebody just tries to do the right thing and ends up in some kind of scuffle, I want our leadership to take that under consideration and make sure we’re not punishing people who are trying to be pro-active and prevent flare-ups,” Aucoin said, following the meeting.

Recent incidents have “tattered” the U.S.-Japan relationship, he said.

If they continue, it could cause Japanese citizens — some of whom are wary of nuclear power — to question whether sailors are responsible enough to operate a nuclear-powered aircraft carrier in Yokosuka.

That in turn would jeopardize the military’s ability to defend the U.S., Aucoin said.

Japanese officials have taken a cautious approach to the Navy’s recent restrictions.

“We will closely watch these efforts by the U.S.,” Kishida said.

U.S.-Japan relations have been strained recently — particularly on Okinawa — following a series of crimes involving Americans with ties to the U.S. military. Even though U.S. crime rates on the island are near all-time lows, each incident seems to set off protests by those who want to see a smaller U.S. military presence there.

A large island-wide protest is planned for June 19.