Traumatic brain injury risks not restricted to the battlefield 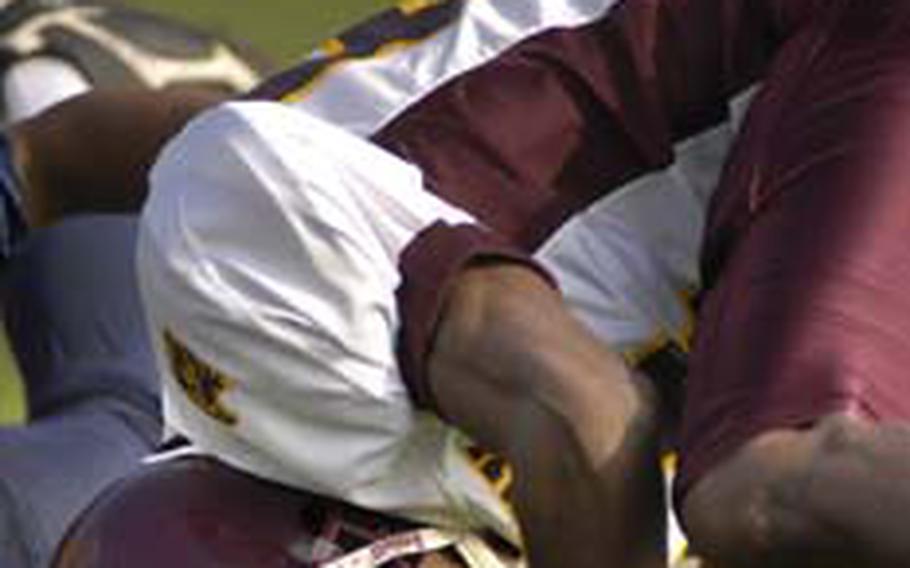 A football player from Vilseck High School strikes the ground during a football game at Heidelberg last October. As many as 3.8 million sports- and recreation-related concussions occur in the U.S. each year, according to an article in the Journal of Head Trauma Rehabilitation. (Ben Bloker / S&S)

The signature injury of the Iraq and Afghanistan wars is not restricted to those engaged in combat.

Mild traumatic brain injury &#8212; more commonly known as concussion &#8212; can occur in the most benign of places, including playgrounds and playing fields.

What may be dismissed as kids just knocking their noggins, getting their bells rung or seeing stars could signal a more serious injury, requiring medical attention.

Traumatic brain injury experts from Landstuhl Regional Medical Center in Germany are raising awareness of head injuries in youth sports by meeting with coaches and children. On Friday afternoon, TBI experts met with Ramstein High School coaches and teachers to relay the signs, symptoms and recommended action plan if players have concussions.

The experts offered some attention-getting straight talk about head injuries, such as:

"Just getting your bell rung is enough to go see a doctor," said Jeanne Jahosky, a social worker at Landstuhl&#8217;s neurology department."You do not have to lose consciousness to have a concussion," said Linda Wierzechowski, a TBI coordinator at Landstuhl."One concussion plus one concussion does not equal two," said Pam Nyman, a TBI coordinator at Landstuhl. "The combined effects are exponential."The local effort is part of the Heads Up: Concussion in Youth Sports campaign by the Centers for Disease Control and Prevention. The motto for the CDC campaign is: "It&#8217;s better to miss one game than the whole season."

The CDC defines concussion as a brain injury caused by a bump or blow to the head that can change the way your brain normally works. As many as 3.8 million sports- and recreation-related concussions occur in the United States each year, according to a 2006 article in the Journal of Head Trauma Rehabilitation.

On the military side, nearly 30 percent of all patients with combat-related injuries seen at Walter Reed Army Medical Center in Washington from 2003 to 2005 sustained a TBI, according to a Department of Defense Web site.

The Landstuhl experts, who screen about 600 patients a month from Iraq and Afghanistan for TBI, said they often encounter troops with the "suck it up, keep going, soldier on" mentality. The troops want to get back to their units despite their injuries. That was a point not lost on the Ramstein coaches.

"You are coaching the children of these people," Nyman said.

The very real dangers of brain injury received widespread attention late last month when actress Natasha Richardson died of a head injury from what has been described as a minor fall during a snow skiing lesson. Richardson was not wearing a helmet but showed no signs of impact from her fall, according to several reports. Her condition rapidly worsened, and Richardson died two days later.

The tragedy is now being used to show the seriousness of brain injuries.

"Even though it may be something that doesn&#8217;t look serious, we need to err on the side of caution," Jahosky said.

Removing athletes from play is recommended when a concussion is suspected.

"Like you would if you sprained your ankle," Karen Williams, a TBI coordinator at Landstuhl, said in an earlier interview.

For more information and free material on sports concussions, call 1-800-232-4636 or see www.cdc.gov/ConcussionInYouthSports.