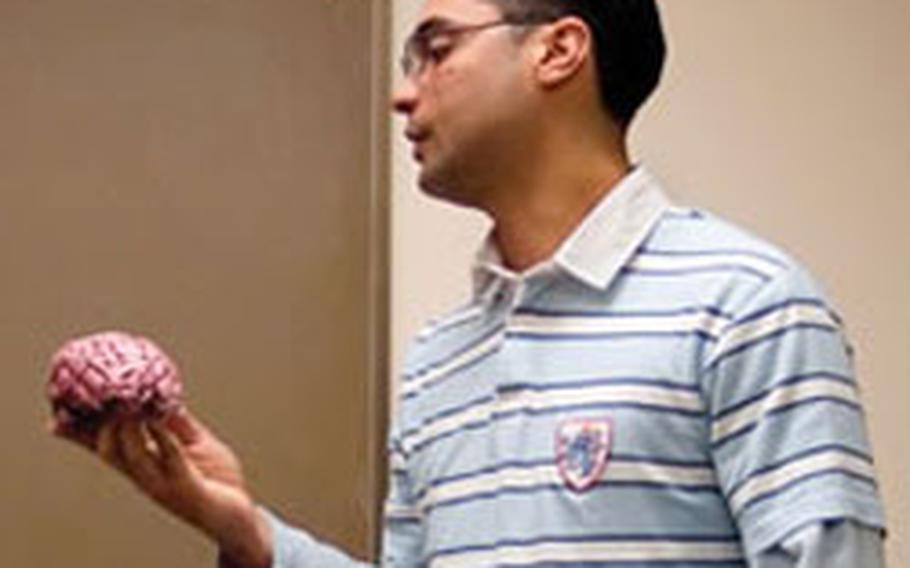 Spc. Hugo Gonzalez, who was wounded in Iraq, gives a presentation about the brain and the effects of traumatic brain injury to fellow patients during a speech pathology TBI group session at Walter Reed Army Medical Center in Washington, D.C. (U.S. Army)

With improved body armor and field medicine, U.S. troops are living through attacks that would have killed them in previous wars, many surviving with secondary injuries that might have been moot in the past.

Among these, Traumatic Brain Injury, or TBI, is the most pervasive.

In terms of cases treated, TBIs are outpacing amputations almost two to one, according to the Congressional Research Service, the public policy research arm of the U.S. Congress.

The cases range from a bump on the head that causes temporary unconsciousness to destruction of brain tissue. Depending on the severity of the injury, brain function could be impaired for anywhere from a matter of hours to a lifetime.

Army Capt. Scott Smiley is somewhere in the middle of this spectrum.

In April 2005, Smiley tried to stop a suicide car bomber in Mosul, Iraq, when the car blew up, sending shrapnel through both of his eyes and into his brain.

In Balad, surgeons removed his left eye and extracted metal from his brain. Later, at Walter Reed Army Medical Center in Washington, D.C., his right eye and more shrapnel came out.

Through it all, Smiley, who was a platoon leader in the 1st Brigade, 25th Infantry Division when he was wounded, has been a model of perseverance. His brain injury partially paralyzed the right side of his body. Even though he remembered how to do things, his body had to relearn common tasks.

He has overcome this and other obstacles. Although he will not see again, he continues to serve in the Army at Accessions Command, dispensing tactical advice to new lieutenants and soldiers.

Still, he&#8217;s an unfortunate member of a swelling statistic. According to the U.S. Department of Veterans Affairs, TBIs are now the most common combat-related injuries.

Smiley thinks Americans are unaware of the toll that TBIs are taking on U.S. forces in Iraq and Afghanistan.

He doesn&#8217;t broadcast his injury because he thinks there&#8217;s a stigma associated with brain injuries, and mentioning it could hurt his career after the Army.

The Pentagon isn&#8217;t saying much about brain injuries either. The Defense Department keeps almost all data related to TBIs close to the vest, even as it reports similar data relating to deaths in Iraq and Afghanistan.

From January 2003 through July 2006, the Defense and Veterans Brain Injury Center &#8212; home to virtually all of the military&#8217;s clinical brain injury care and research programs &#8212; treated 1,360 military patients, according to Cynthia Vaughan, a spokeswoman for the office of the Army surgeon general.

Slightly less than half of these patients had mild TBI, the rest had moderate to severe injuries, Vaughan says.

Mild TBIs, such as concussions, usually result in a loss of consciousness for less than an hour.

Of the severe TBIs, according to Vaughan, 136 were the result of penetrating head injuries. An additional 158 were closed-head injuries, caused by anything from a blow to the head to shockwaves from bomb blasts.

This tally does not, however, account for brain injuries that aren&#8217;t treated by the brain injury center.

Preliminary information from Iraq and Afghanistan suggests the occurrence of TBI is &#8220;much higher&#8221; than the 14 to 20 percent occurrence seen in surviving combat casualties from previous conflicts, according to the brain-injury center&#8217;s Web site.

Additionally, research by the center suggests that about 60 percent of troops who survive external injuries from bomb blasts &#8212; the No. 1 cause of troop deaths in Iraq &#8212; could also have a brain injury.

With bomb blasts accounting for 11,513 injuries in Iraq and Afghanistan through Oct. 21, according to the Pentagon, that could mean about 6,900 troops have suffered brain injuries from bomb blasts alone.

This total is more than five times the number so far treated by the brain center, headquartered at Walter Reed.

The Department of Defense won&#8217;t make public any data about brain injuries suffered by troops in Iraq and Afghanistan, citing concerns that such a release could endanger troops.

This wasn&#8217;t always the case. When the war in Iraq began, the Defense and Veterans Brain Injury Center &#8212; home to virtually all of the military&#8217;s clinical brain injury care and research programs &#8212; made brain-injury information public. But the center, headquartered at Walter Reed Army Medical Center, was soon told to stop releasing the information, said Warren Lux, a neurologist and the center&#8217;s acting director. Now the information is controlled by the Pentagon and the Army surgeon general, he said.

More than a half dozen requests Stripes sent to the Army surgeon general&#8217;s office for information about brain injuries &#8212; including specific numbers and types and when they happened &#8212; were denied on grounds of &#8220;operational security.&#8221;

Meanwhile, the Department of Defense regularly releases similar information about troop deaths in Iraq and Afghanistan, usually within days of the incident.

Casualty reports posted on Web sites for the Multi-National Force-Iraq and U.S. Central Command usually detail the time, location, method of attack and number of troops killed by enemy forces in Iraq and Afghanistan.

The Pentagon also maintains a public, up-to-date list of statistics that categorizes the causes of troop deaths and injuries.