An illustration from a Batman comic written by Tom King, a former CIA officer who operated in Iraq and Afghanistan. (DC Entertainment)

An illustration from a Batman comic written by Tom King, a former CIA officer who operated in Iraq and Afghanistan. (DC Entertainment) 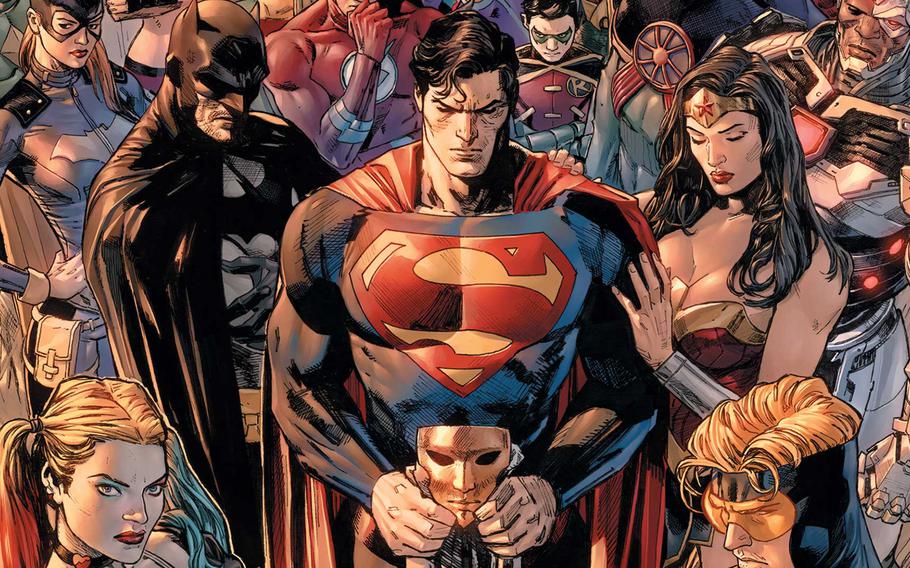 The cover of a comic exploring post-traumatic stress among superheroes such as Superman, Batman and the flash, written by Tom King, a former CIA officer who operated in Iraq and Afghanistan. (DC Entertainment) An illustration from a comic written by Tom King, a former CIA officer who operated in Iraq and Afghanistan. (DC Entertainment) 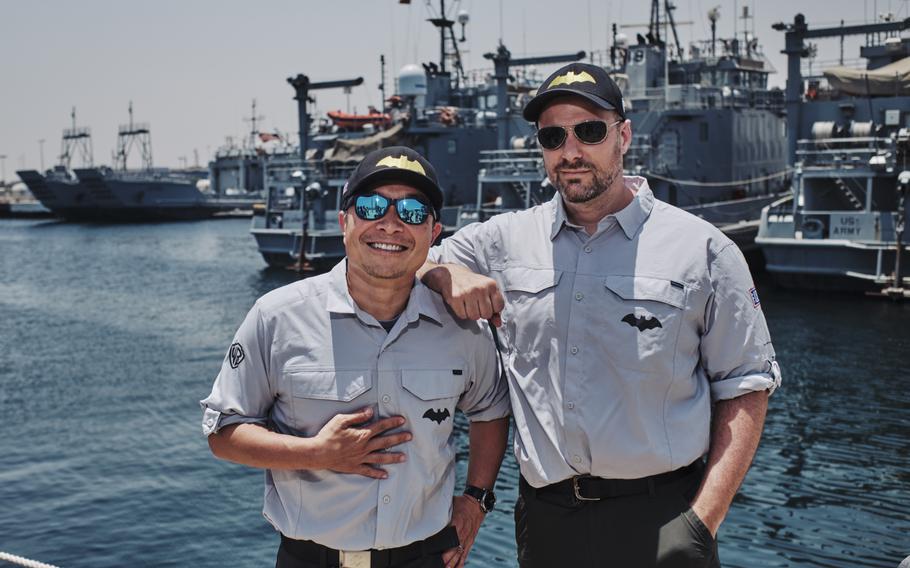 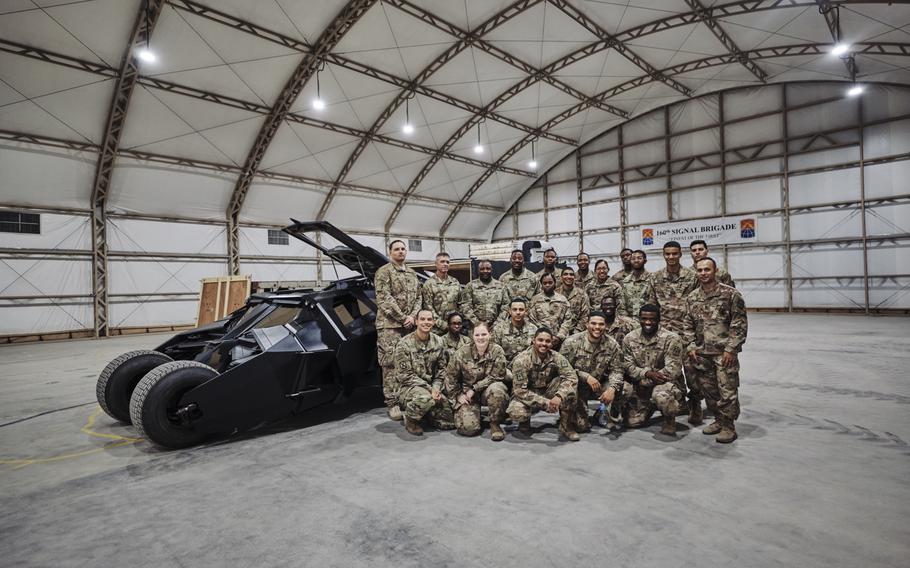 For the first time, the ''Tumbler'' Batmobile was deployed on a special USO Tour to visit U.S. servicemembers at Camp Arifjan in Kuwait on May 30. The 2-ton Tumbler traveled from London to Luxembourg and on to Kuwait in a custom 1.7 ton crate. (DC Entertainment) Former CIA agent Tom King, who writes DC Comics’ flagship Batman series and other titles, spent years serving on counterterrorism missions in Iraq and Afghanistan and now uses superheroes to tell stories about the impact of wars there on troops returning home.

“What I try and put in my comic books is that concept that people don’t really know what they’re going to come back with ... and that courage to come back and say, ‘Look what I did, the wounds that occurred, and I’m still going,’” King said in a phone interview Tuesday before visiting troops deployed to the Middle East.

The award-winning author arrived in the region Wednesday as part of a five-day USO celebrity tour bringing him to bases in Kuwait along with famed “Uncanny X-Men” illustrator Jim Lee and the “Tumbler” Batmobile from the “Dark Knight” film trilogy.

The trip, which comes as Batman turns 80 this year, is a return to the region where King served with the CIA.

As a child, he had wanted to write comic books and had interned for DC and Marvel while attending Columbia University in New York. But King took a career detour after 9/11 to serve for seven years with the CIA.

On missions in Baghdad and near Afghanistan’s border with Pakistan, he recruited terrorists to spy on fellow terrorists and tried to disrupt enemy operations any way he could, he told GQ in 2016.

King, a recipient of the 2018 Will Eisner Comic Industry Award for Best Writer for stories he penned about Batman and his protege Dick Grayson, hopes his work will help people understand the experiences of a generation that has spent much of their lives fighting terrorism overseas.

“It comes easy for people to worship superheroes and to think they are these ideal figures to be like, and if we don’t live up to that, we’re failures,” King said. “I wanted to show that the people we worship go through the same things.”

His early books include stories about a U.S. contractor navigating the murkiness of Iraq after the 2003 invasion, Green Lantern embedding with a group of superterrorists in a ceaseless space insurgency and Marvel Comics’ superhero android Vision trying to integrate into a peaceful suburban life.

At some point, King realized these books all had a similar theme, drawn from his time in the CIA: A guy goes into a situation with “every good intention in the world” but soon realizes the moral consequences aren’t so clear.

King has tried to bring this sense of doubt and confusion to Batman. In most previous Batman stories, the Caped Crusader gets angrier and “vengier,” and then his rage leads him to victory, King said.

“My Batman is trying to undermine that,” King said. “He gets torn down in a way that anger and revenge and those sorts of emotions don’t serve him. In fact, they sort of lead him farther into his crisis than out of it.”

Like many veterans of the Global War on Terrorism, Batman must turn to someone close and try to talk about his trauma, lest it become “toxic,” King said.

In one recent run of stories, Batman tells his fiancee Catwoman of his doubts about decisions he made during a gang war between the Joker and the Riddler. The more choices he made, the more he was forced to make morally ambiguous ones, including allying at one point with a “bad guy,” he tells her.

King’s approach to his characters’ psyches has at times been divisive among readers, say some critics who have praised his innovation and risk-taking with the series.

There’s a psychological vulnerability in King’s stories that has made some fans uncomfortable, Zack Quaintance wrote in a review on the site Batman’s Bookcase. In a separate piece last fall, he argued that King is working through an “essential update” to a classic ‘90s storyline in which the villain Bane breaks Batman’s back.

In a similar arc aimed at a new generation of readers, King’s Bane seeks rather to break Batman’s spirit, he said, reflecting a shift from Cold War clarity to fresher anxieties.

In one of the clearest examples of how King links the struggles of post-9/11 veterans and superheroes, a limited series titled “Heroes in Crisis” is set at a therapy retreat center for comic book characters with post-traumatic stress disorder.

King drew his inspiration from a site in Iraq’s Green Zone where soldiers could take a break from the war and go swimming.

“I wanted to create something like that, but in a superhero realm,” King said.

The series has drawn some backlash, however, including for its portrayal of mental health issues. Having characters like the Flash act through symptoms suffered by real people might seem to trivialize the issues, writer Tirhakah Love wrote in an article on The Ringer in February.

King tried to avoid portraying PTSD in a cliched manner, he said. The superheroes react differently to trauma. Some focus on the people they couldn’t save, some confess how they’ve turned to substance abuse.

It’s meant to bust the perception some may have that if they’re not living up to some idealized version of superhero invulnerability, they’re a failure, King said. Such a notion is a fallacy, he said.

“There is no perfect in this world,” he said. “There’s just trying to do your hardest and get as far as you can.”