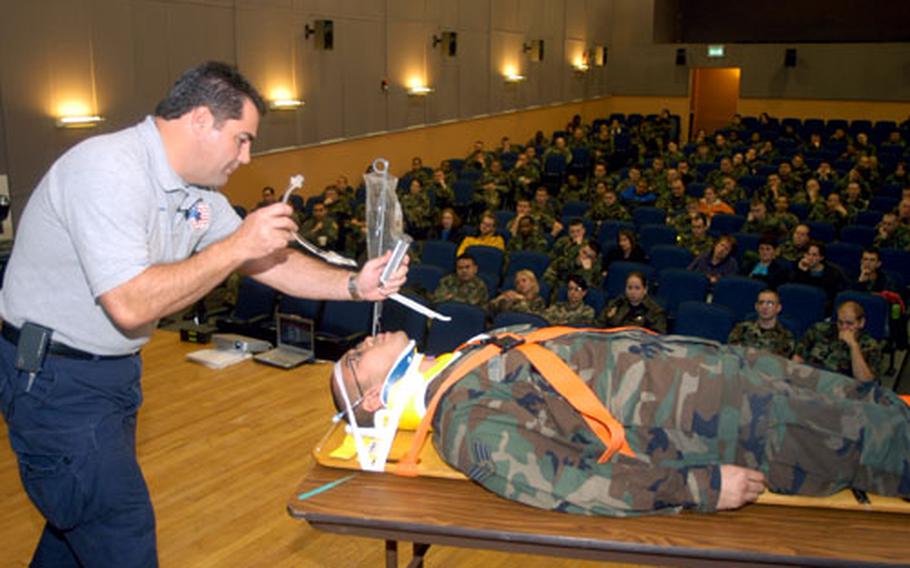 Joe McCluan, a teacher for the Florida-based Stay Alive From Education program, shows audience members a breathing apparatus as Senior Airman Lawrence Dojoles plays the role of a trauma victim during a presentation at the RAF Mildenhall theater. (Sean Kimmons / S&S)

RAF MILDENHALL &#8212; When audience members were asked if they ever drove without a seat belt, Senior Airman Lawrence Dojoles was one of the brave few to raise their hands.

The 22-year-old Dojoles and others &#8212; many under the age of 26, the target audience &#8212; were attending a Stay Alive From Education presentation at the base theater last week, put on by a Florida-based firefighter and paramedic team. The presentation was intended to drive home a point on the dangers of drunken driving and not wearing seat belts by showing real-life photos of the disturbing consequences and a demonstration of what a trauma victim goes through.

Presenters Joe McCluan and Vince Easevoli chose Dojoles to be their trauma victim at the team&#8217;s first of three one-hour presentations of the day at the base. About 400 RAF Mildenhall personnel attended the presentations.

The 100th Maintenance Squadron airman went up on stage, where the team explained the mock situation: Dojoles is at a party, downing a few drinks, when he decides to drive home. The alcohol affects Dojoles&#8217; judgment, and he crashes his car into a dump truck. Unfortunately for Dojoles, he did not have his seat belt on, so his head slams through the windshield as his chest, back and legs receive extensive injuries from his impact with the steering wheel. The two-man team of McCluan and Easevoli arrives on scene, places a neck brace on Dojoles and straps him on a backboard.

The team then uses Dojoles to go over the numerous types of needles, breathing apparatus, intravenous therapy, and a catheter that the team would have to use if need be. Luckily for the demonstrator, the team didn&#8217;t show the full capability of the medical supplies.

The process still made its point to Dojoles and others in the crowd.

When asked if the demo changed his mind about wearing a seat belt at all times, even for short distances, Dojoles replied, &#8220;Definitely.&#8221;

Hopefully, the demonstration will &#8220;save people from going through that type of pain and experience,&#8221; he said.

That&#8217;s why McCluan got involved in such presentations &#8212; to stamp out misconceptions.

As a firefighter and paramedic for 18 years, McCluan has seen many gory scenes and plenty of lives lost. Fed up with seeing them, he joined the S.A.F.E. program in 1999 to help educate people.

&#8220;These guys are professionals and they do it better than we could ever do it. I think the message got across much better,&#8221; Slack said.

For more information on the S.A.F.E. program, check out the Web site www.safeprogram.com.