Trash still piling up at Naples base 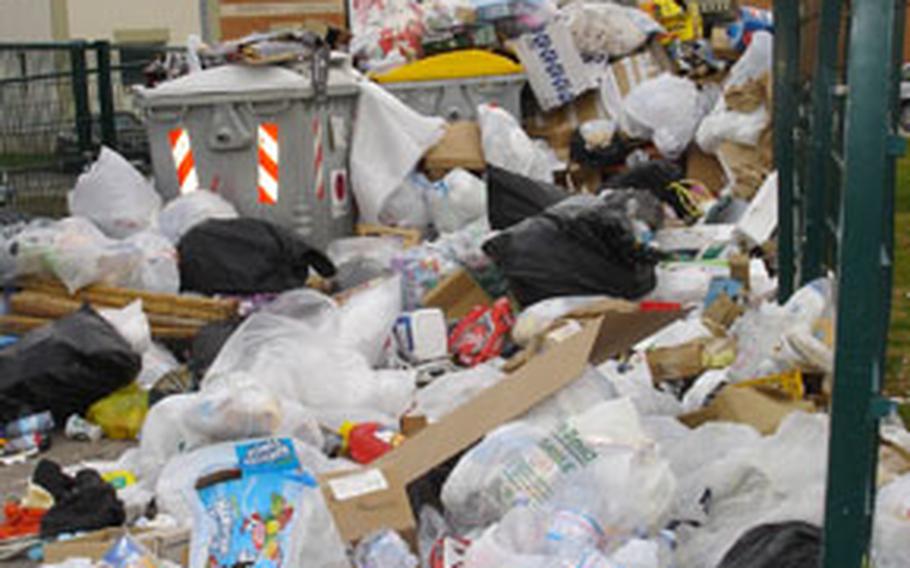 This trash collection area on the Navy Support Site at Gricignano was empty Saturday. On Thursday, it was spilling out of the enclosure. (Lisa M. Novak / S&S)

This trash collection area on the Navy Support Site at Gricignano was empty Saturday. On Thursday, it was spilling out of the enclosure. (Lisa M. Novak / S&S) 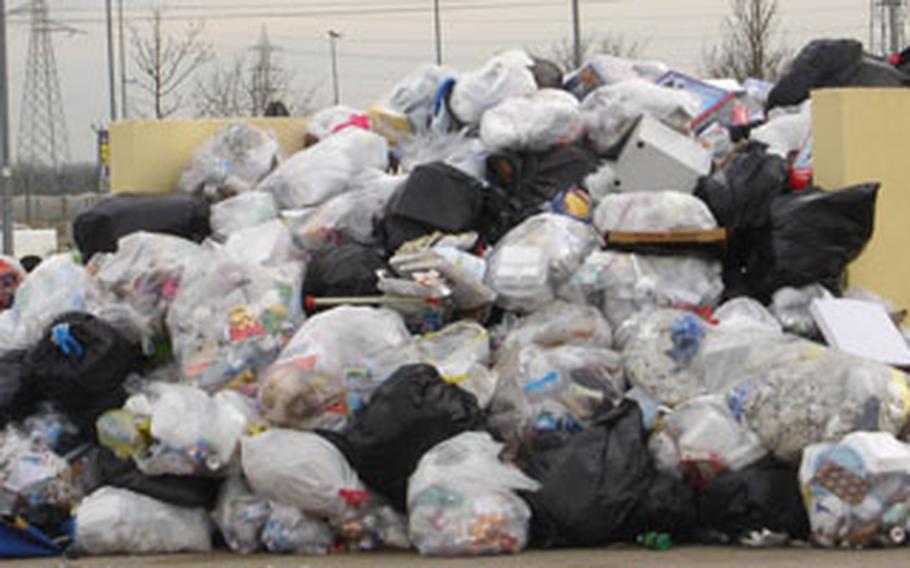 Dumpsters are completely buried as trash continues to pile up at collection sites around the base on the Navy Support Site at Gricignano in Naples. (Lisa M. Novak / S&S)

NAPLES, Italy &#8212; At the Navy Support Site at Gricignano in Naples, the mountains of trash that have piled up for the past two months occasionally are hauled away, but it&#8217;s hard to tell. Just as soon as they are removed, the trash piles up again.

According to base officials, a landfill that was supposed to open in mid-December has not, and the base is still relying on various companies to haul the trash away.

&#8220;We are continuing to coordinate with the local towns near Gricignano for garbage collection,&#8221; said Capt. Floyd Hehe, commander of Naval Support Activity, Naples.

The base contracts trash services through the city of Gricignano, and the city contracts with various collection services.

While no date has been set for the new landfill site to open, The Associated Press reported that work began Thursday to reopen a dump in the Pianura neighborhood to to try to help resolve the crisis in Naples. Two vans entered the dump in the immediate outskirts of Naples to start cleaning the site, although angry residents staged a brief roadblock Thursday to protest the planned reopening.

Although Navy officials said that the holidays didn&#8217;t significantly increase the volume of trash on the Navy Support Site, some residents disagree.

The problem with trash disposal in Naples has reached epic proportions: Refuse on the highways and streets creates driving hazards as cars swerve to avoid driving through it.

Naples and the surrounding Campania region have been plagued by garbage crises for years. The most recent pileup started around Dec. 21, and residents have resorted to setting trash on fire, raising fears of toxic smoke.

European Union officials said Thursday they were monitoring the situation in Campania, although sanctions against Italy for failing to observe EU garbage laws were not imminent.

While nobody can agree on a solution to the problem, residents in the city and on the base seem to have resigned themselves to living with the trash.