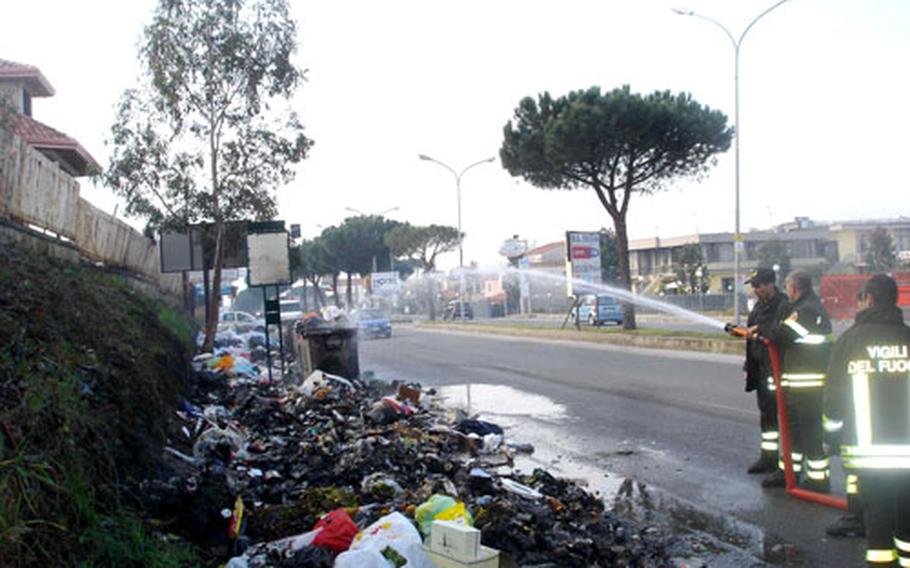 Firefighters in Lago Patria extinguish one of many trash fires burning across the city. (Lisa M. Novak / S&S)

NAPLES, Italy &#8212; The Navy has been forced to modify operations at its recreational facility at Carney Park because of recent protests over the proposed reopening of a long-closed trash dump in the Pianura area.

Reopening the Pianura dump would ease a huge pileup of garbage in some Naples neighborhoods &#8212; uncollected because there&#8217;s no more room at city dumps &#8212; but Pianura residents say using their dump would pose a health risk.

Earlier in the week, base staff were let go early as protesters blocked off roads leading into and out of the park. The park is open this weekend, but patrons are advised that protests can limit access.

&#8220;For this weekend&#8217;s ski trip, we aren&#8217;t using Carney Park as a pick-up or drop off point,&#8221; said Patrick Keaveny, Morale, Welfare and Recreation community support director in Naples. &#8220;Those who signed up for the trip will leave and return from the Support Site at Gricignano or the base at Capodichino.&#8221;

Base officials said they continue to monitor the situation, and advised personnel to use caution when going near these areas. For real-time updates on the traffic, servicemembers can go to http://tgcom.autostrade.it/tgcom. The site is in Italian and doesn&#8217;t go into great detail, but the icons and color-coded graphics are self-explanatory.

But checking the latest updates might not be enough to keep commuters from getting stranded. Unlike recent protests over trucking wages or fuel prices, the protests surrounding the garbage crisis aren&#8217;t centrally organized.

According Teresa Merola, Naples Support Activity media relations liaison, there is little if any advanced notice of these protests.

&#8220;I spend a lot of time on the phone,&#8221; said Merola. &#8220;I always have to call several sources because the information I get from one may differ from what I get from another. The information changes very rapidly.&#8221;

While the Pianura area is the focal point for the ongoing protests, other Naples neighborhoods where servicembembers, Defense Department employees and families live are also affected by the lack of trash disposal facilities.

Neighborhoods such as Licola, Monteruscello and Lago Patria have noted a marked increase in the amount of uncollected trash. Local fire departments have been dispatched to these areas to extinguish fires.

Residents aren&#8217;t burning trash as a form of protest. For the time being, there is no other way to get rid of it.

There does appear to be some relief in sight. A handful of cities have agreed to help with the crisis. According to the Italian press service AGI, a ship left Naples Wednesday night, loaded with 600 tons of trash, headed to Cagliari, on the island of Sardinia, for disposal.