Army Capt. Bill Clayson, center, explains on Sunday to soldiers from the 4th Infantry Division how they will get their equipment out of the port. Clayson is one of roughly 70 soldiers from the 1184th Transportation Terminal Battalion, an Army reserve unit from Mobile, Ala., which is coordinating the off-loading of ships bringing equipment into Kuwait. (David Josar / S&S)

Army Capt. Bill Clayson, center, explains on Sunday to soldiers from the 4th Infantry Division how they will get their equipment out of the port. Clayson is one of roughly 70 soldiers from the 1184th Transportation Terminal Battalion, an Army reserve unit from Mobile, Ala., which is coordinating the off-loading of ships bringing equipment into Kuwait. (David Josar / S&S) 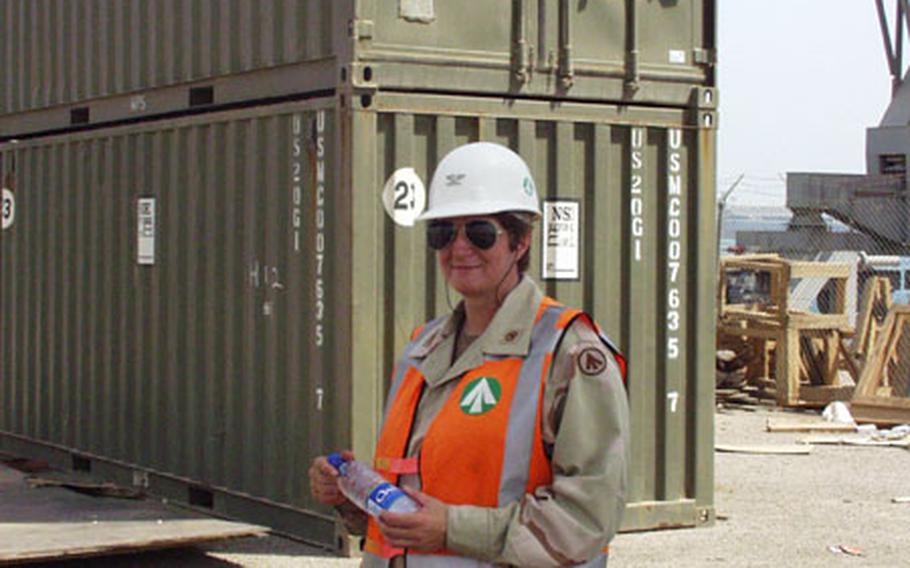 Army Col. Victoria Leignadier is the combined commander of the two Army transportation battalions that are unloading equipment at the port in Kuwait City. The units are unloading five ships a day, an amount Army officials consider a first in the number of pieces of heavy equipment, such as Chinook helicopters and tanks, that can be off-loaded. (David Josar / S&S) 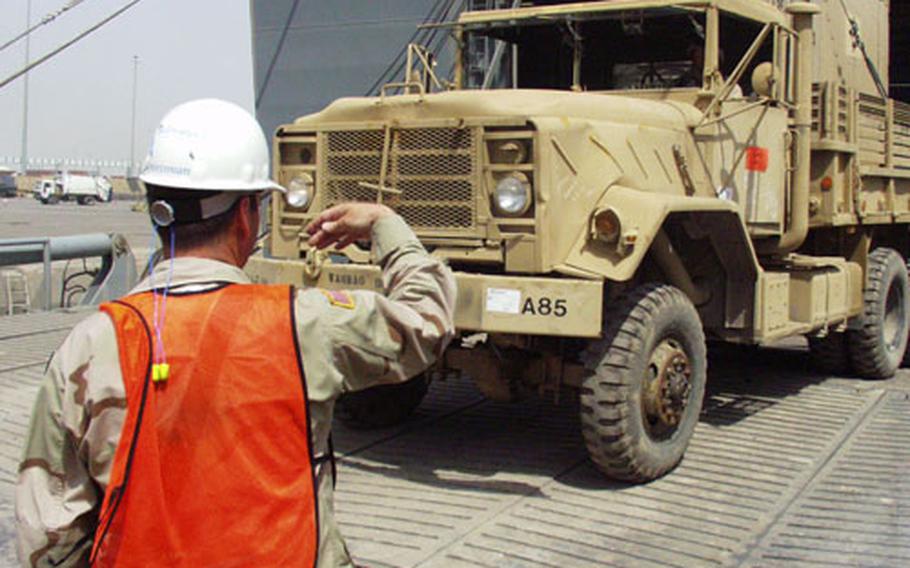 Army Capt. Bill Clayson, center, explains on Sunday to soldiers from the 4th Infantry Division how they will get their equipment out of the port. (David Josar / S&S)

SHUAIBA PORT, Kuwait &#8212; Army Capt. Bill Clayson had ditched his Kevlar helmet for a white hard hat and was surrounded by about two dozen soldiers from the 4th Infantry Division.

Clayson didn&#8217;t have much time on Sunday morning. Behind the soldiers sat a row of tanks, Humvees and trucks that had to be moved out of the harbor so unloading of the massive ships sitting at the dock could continue.

The reservist captain, who ordinarily faces college students as an American history professor at the University of Southern Alabama, explained to the soldiers how the vehicles were to be driven down the road to the staging area.

Clayson, who is part of what the military considers one of the most intense unloading of equipment ever performed, said, &#8220;It can get pretty hectic, but we&#8217;re doing OK.&#8221;

The past week has seen a flood of activity the soldiers had expected, but weren&#8217;t sure they could handle.

About 30 U.S. Navy ships, some nearly as large as aircraft carriers and carrying as many as 450 large vehicles such as Chinook helicopters and tanks, had been redirected here after waiting off the coast of Turkey for permission to go ashore. That permission never came.

Those ships were directed to Shuaiba port when the Turkish parliament voted not to allow its country to be used to open a northern front in Iraq. The ships are finally touching dry land, quicker than anticipated.

Three ships were the most that military officials believed could be unloaded simultaneously. But five ships were lined up at the dock Sunday as drivers and forklifts and crane operators raced about.

Off one ship came a tank. Off another, a Humvee.

Earlier, giant cranes had been brought in to unload Chinook helicopters, the largest, bulkiest pieces of equipment in the Army inventory, said Army Col. Janet Cobb, commander of the 1184th.

The 1184th is a reserve unit from Mobile, Ala., that has been working at the port since November. The 11th Transportation Battalion is an active-duty unit stationed at Fort Eustis, Va.

Soldiers from the transportation battalions guide equipment off the ships, then scan the bar codes on every vehicle, freight container and bundled pallet to track where the items are and where they&#8217;re going. They also make sure the special freight-handling equipment and civilian contractors are in place to help.

&#8220;I had great people who were enthusiastic and well-trained,&#8221; Leignadier said, explaining why the soldiers were more successful than some leaders thought was possible.

The challenge at Shuaiba port is simply the bottleneck of ships trying to unload goods.

In most cases, ships set to sea in the order they are to be unloaded when they reach their destination. But the ships carrying equipment from the 4th ID arrived at Shuaiba all at once after their detour from the Mediterranean Sea.

Cobb said that during Desert Storm, when the 1184th was also activated, there were several ports to use to unload equipment in Saudi Arabia. But during this battle, and with the denial of harbors in Turkey, there is only Kuwait and only Shuaiba port.

As daily temperatures began to hover around the upper 80s and push into the 90s, soldiers at the port were quickly covered in sweat and constantly drank water to keep hydrated.

Clayson, who like his fellow soldiers works 12-hour shifts, said his biggest challenge is keeping the vehicle flow constant and avoiding backups. The most common problem is a truck or Humvee that won&#8217;t start.

Dotted across the port are Humvees and trucks awaiting jump-starts, pushed aside to clear the way for other vehicles.

Clayson said the 4th ID gear began the sea journey nearly two months ago, crossing the Atlantic Ocean, the Mediterranean and the Persian Gulf. That has contributed to the high number of vehicles that won&#8217;t start.

The trickiest pieces of cargo to move are the helicopters, Cobb said.

The Black Hawks, Apaches and Chinooks are sturdy and powerful when they fly, but are somewhat fragile when transported, she said. The propellers are removed and the bodies are covered in shrink-wrapped plastic.

The relatively small wheels make them delicate to move off the ship, down the ramps and into an area set aside in the port where they are reassembled and flown into the desert.

Ordinarily, Spc. Lorenza Gamble works with autistic teens in Mobile, Ala., but when he was activated in November, he was ready and anxious to go.

Army Maj. Joyce Dallas, the cargo documentation chief, is a counselor at Bishop State Community College in Mobile. But instead of selling teenagers on the importance of higher education, she ensures military units know where to find their equipment.

She also was activated with the 1184th during the Persian Gulf War, but she was part of a unit that was shipping unused ammunition back to the United States after the war.