Translators give voice to an ailing nation 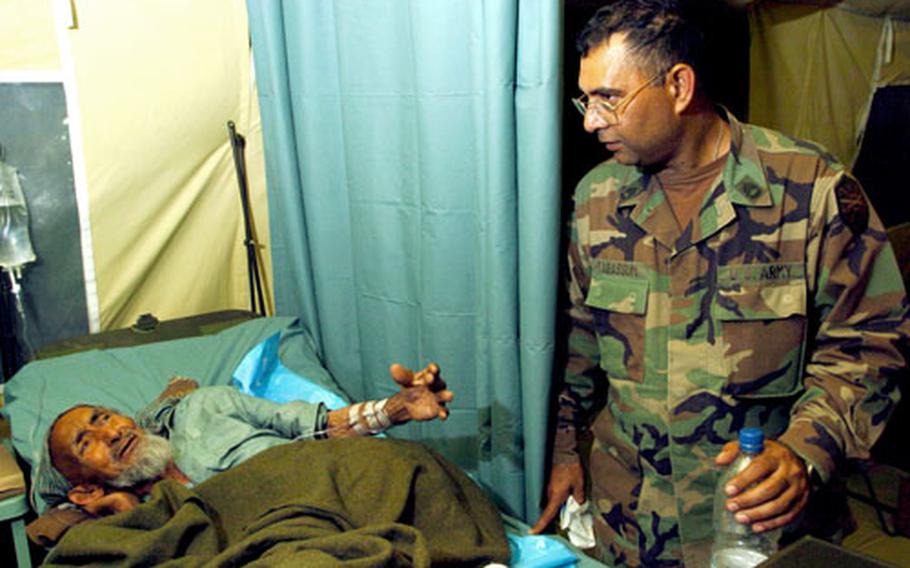 Sgt. 1st Class Mohammad Tabassum, a translator for the 212th MASH, considers the best response to an elderly Pakistani man being treated in the hospital. (Eric S. Powell / U.S. Navy)

Sgt. 1st Class Mohammad Tabassum, a translator for the 212th MASH, considers the best response to an elderly Pakistani man being treated in the hospital. (Eric S. Powell / U.S. Navy) 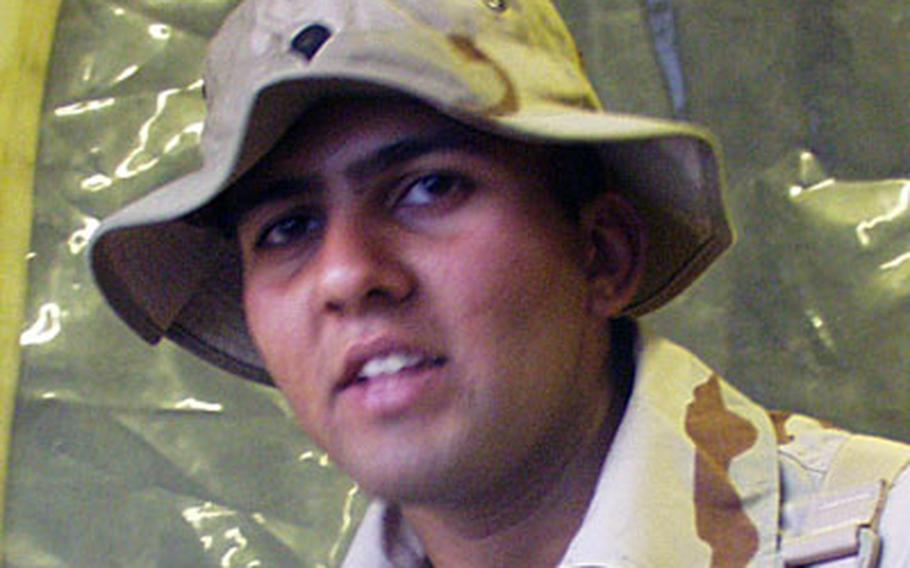 Spc. Abbas Farooqi, 21, was born in Karachi and came to the United States when he was 15. (Nancy Montgomery / S&S) 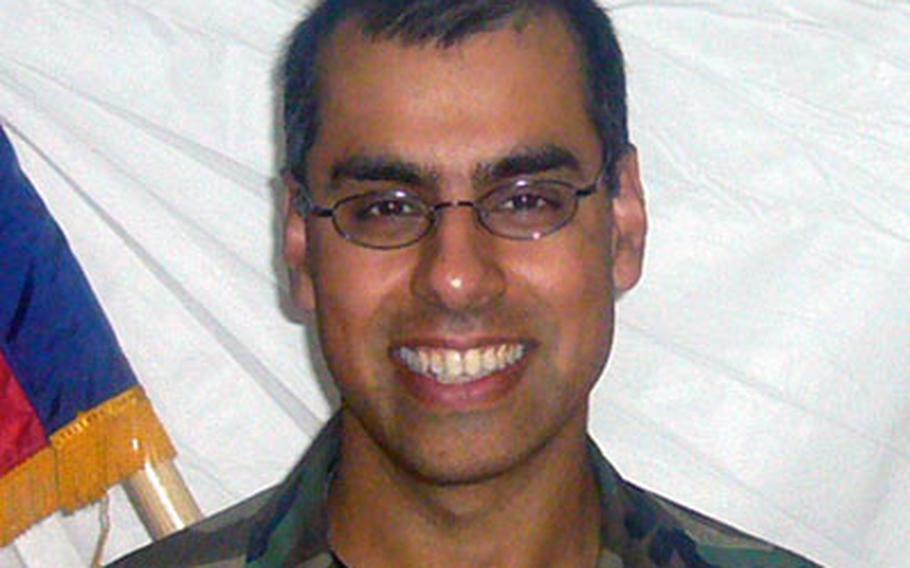 Maj. Fareed Sheik, who heads up the MASH intensive care unit, was born in Lahore but was brought to the United States when he was 3 months old. (Courtesy of Soo Lee Davis) 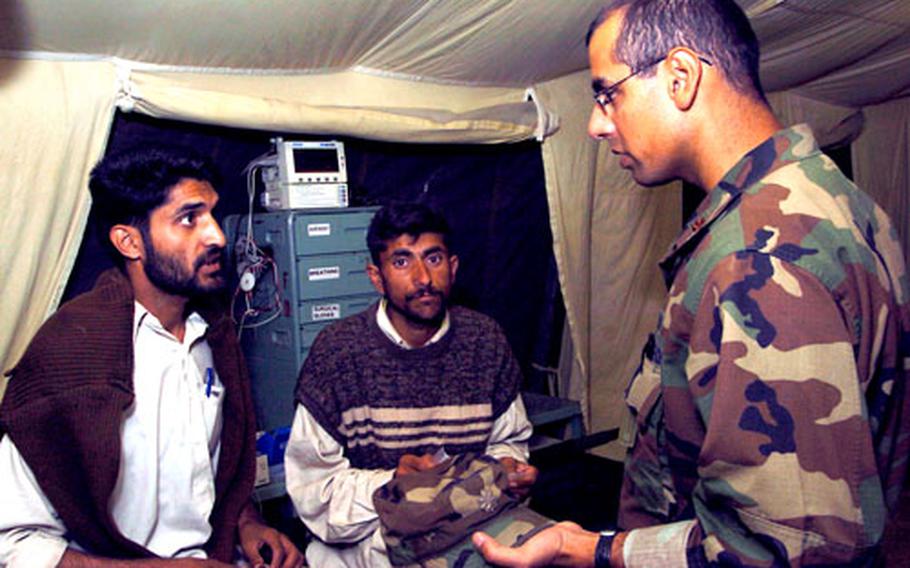 MUZAFFARABAD, Pakistan &#8212; Some of the busiest soldiers racing from patient to patient in the Germany-based 212th Mobile Army Surgical Hospital have no skill with a scalpel. And when it comes to making a diagnosis, they are utterly hopeless.

But they have one skill essential to patient care: the ability to communicate in both the patients&#8217; language &#8212; usually Urdu &#8212; and that of the MASH doctors and nurses &#8212; usually English.

The MASH translators have been a critical conduit of information, explanation and comfort since the hospital began its mission providing medical care to survivors of the Oct. 8 earthquake. At last count there were six, including one civilian doctor from Ohio.

In some ways, the translators&#8217; job is tougher than anyone else&#8217;s. They hear the patients&#8217; stories, tragic beyond measure, and relate to their pain more deeply. They&#8217;re the ones the patients ask for money, for mercy, for shelter.

One translator is a young tanker who values the freedoms of the United States while also respecting the iron-clad traditions of Pakistan. Anohter is a doctor and Air Force major who wistfully talks about his baby daughter learning new skills and changing without him there. A third spent a &#8220;bitter&#8221; year as a translator in Guantanamo Bay, Cuba, and views this deployment as a huge opportunity to do good and change hearts and minds.

All three are Pakistani-born, immigrated to the United States and eventually joined the U.S. military.

Spc. Abbas FarooqiFarooqi, 21, was born in Karachi and came to the United States with his mother and stepfather when he was 15, seeking a better life, he said. His family first settled in New Jersey; he speaks English with a Jersey accent that fits perfectly with his bold persona.

But Farooqi, who also is somewhat of a fixer &#8212; bringing pomegranates, bananas and cell phone cards to his friends &#8212; is undoubtedly the only one who expects his mother to visit him in Muzaffarabad within the next few weeks.

He recalls with satisfaction his teenage years in Cincinnati, where, he said, he was the only darker-skinned kid in town.

He enlisted in the Army in 2003, after working at McDonald&#8217;s, a gas station, a restaurant and the nursing home where his mother worked and where he determined he never again wanted to bathe an elderly person.

He said he enlisted, despite pursuing studies in aviation technology at the University of Cincinnati, because after Sept. 11, 2001, he believed he needed the U.S. military and citizenship to avoid being perceived as a potential terrorist.

Like some of the other translators, Farooqi was plucked from his unit, the 2nd Battalion, 37th Armored Regiment in Friedberg, Germany, in what appeared to be an act of God.

Farooqi, who&#8217;s planning a traditional Pakistani arranged marriage, was surprised at the poverty and misery of the people, many from the mountain villages in the poverty-stricken Kashmir region. He felt terrible telling patients&#8217; relatives they&#8217;d have to spend the night somewhere other than the hospital, wherever that might be.

Farooqi plans to become a U.S. citizen and possibly an Army officer. But he also thinks of Pakistan as a magical place. Once, when asking a patient&#8217;s brother the patient&#8217;s age, the brother said they were both 29. The two men were not twins and the brother looked much older. So how could they be the same age?

Maj. Fareed SheikSheik, 32, an internist with the 435th Medical Group at Landstuhl in Germany and now heading up the MASH intensive care unit, was born in Lahore but was brought to the United States by his parents when he was 3 months old.

He stayed fluent by speaking Urdu at home, watching movies, listening to music and taking summer trips back to Pakistan. But being with the MASH in Pakistan, he said, &#8220;day by day, I get more fluent.&#8221;

As a doctor, Sheik is more aware than the other translators of the culture clashes that arise with Western doctors treating poor Pakistani patients. Asking a patient headed for surgery if he has any allergies or wears glasses &#8212; routine in the United States &#8212; is the wrong question.

Sheik noted the vast lack of access, except for the rich, to health care.

The earthquake had killed 20 or 30 members of some patients&#8217; families, he said, and the despair was evident.

Sheik also is knowledgeable about some of the more urbane pleasures of Islamabad, Pakistan&#8217;s capital, naming restaurants to visit and declaring Islamabad to have better Chinese food than that of New York City.

Sheik misses his wife, he said, and he misses his baby, the couple&#8217;s first. Yet his family sacrifice was bettering lives in a broader sort of family, he said.

Sgt. 1st Class Mohammad TabassumSome 35 years ago, Tabassum, 48, attended middle school just a few miles away from the Kashmiri government compound where the 212th MASH set up. He couldn&#8217;t wait to get back here &#8212; especially after spending a year as a translator at Guantanamo Bay, Cuba.

&#8220;It was my wish that I could come back to Pakistan and be deployed in a hotbed for extremism, for the Taliban,&#8221; he said. &#8220;This is the opportunity of a lifetime for me. I will be here until I make these people believe we are a hell of a lot better than what they&#8217;re taught by some ignorant mullah or sheik.&#8221;

He decries the &#8220;ignorance, the stupidity&#8221; of many of the young men detained at the Cuba base, some of whom, he said, wanted to fight for Islam but did not even know the correct way to pray.

&#8220;I said I wish there was a way we could educate these people before they form these screwed-up ideas of who we really are.&#8221;

The relationship of the translators and clerics with the command, then under the leadership of Maj. Gen. Geoffrey Miller, was also troubled.

Finally, Tabassum said, the military police guarding the detainees were sometimes too quick to use violence, especially in cell extractions. The troops called the procedure &#8220;IRF-ing,&#8221; and it involved a group of guards, called the Initial Response Force, overwhelming a prisoner after a variety of infractions.

So, although the primary mission for Tabassum is to translate in the MASH, his goal is far grander.

&#8220;They&#8221; are the patients and their relatives who come to the MASH. Tabassum, who was a grown man when he left Pakistan, is comfortable and avuncular with the patients in a way the other translators are not. He ruffles their hair and strokes their arms or scolds them for traveling too far alone.

&#8220;I go out of my way to be kind and generous and make them feel we are everything that [the Taliban and al-Qaida] and the Pakistani government is not,&#8221; he said.

Tabassum&#8217;s experience as a Pakistani who came alone to America at age 21 was one of generosity and opportunity, he said.

Tabassum went to college with the help of Pell grants and eventually earned a master&#8217;s degree in human resources. Before being tapped out of the blue to head to Pakistan with the MASH, he had been NCO in charge of public works at U.S. Army Garrison Benelux.

There might be an extra benefit to his effort, he said: less fear and suspicion of Muslims in America. On a recent trip through a variety of airports, the sergeant and his belongings were searched numerous times. Finally, he asked one airport worker why, and to his delight she spoke candidly.