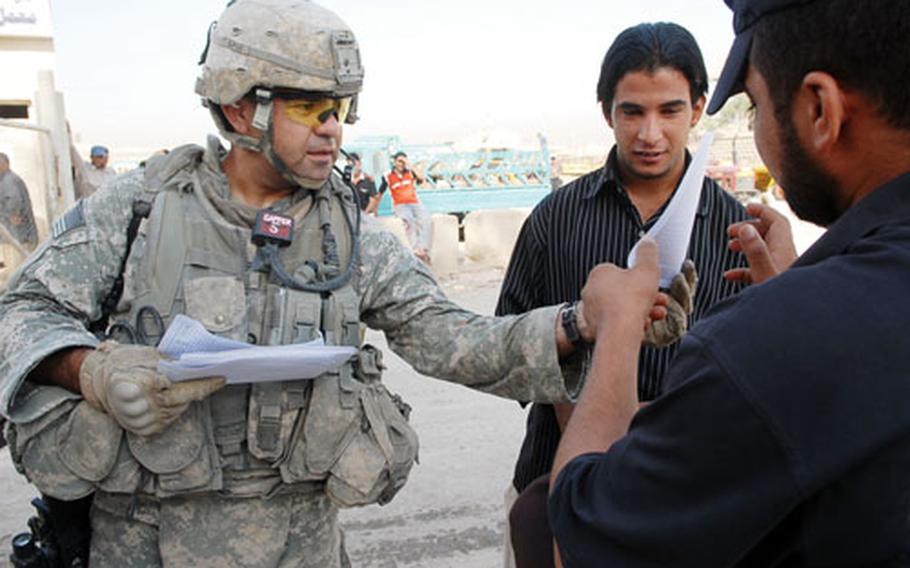 Staff Sgt. Gabriel Minor hands a wanted poster to an Iraqi man during a patrol Sunday in Jihad area. "Sons of Iraq" groups give intelligence tips directly to Company E, but leaders hope the transition to Iraqi government authority will help them work closer with Iraqi Army leaders. (James Warden/S&S)

Staff Sgt. Gabriel Minor hands a wanted poster to an Iraqi man during a patrol Sunday in Jihad area. "Sons of Iraq" groups give intelligence tips directly to Company E, but leaders hope the transition to Iraqi government authority will help them work closer with Iraqi Army leaders. (James Warden/S&S) The patch of a "Sons of Iraq" member from Baghdad’s Ghazaliya neighborhood stands out while the man waits for his file to be reviewed Tuesday by Capt. Thomas Melton, commander of A Troop, 1st Squadron, 75th Cavalry Regiment. "Sons of Iraq" from the area are called "Ghazaliya Guardians." The "E" on the patch means this man works in the east sector of the neighborhood. (James Warden/S&S) Spc. Adam Teske, a soldier in Company E, 1st Battalion, 22nd Infantry Regiment, passes by an Iraqi Army checkpoint during a patrol Sunday in the Jihad area of Baghdad. The Iraqi Army will soon take charge of the "Sons of Iraq," who man the area’s other checkpoints. (James Warden/S&S)

BAGHDAD &#8212; The council meeting was supposed to have been about reintegrating people returning to the Jihad area of Baghdad as the fighting died down.

Iraqi Staff Col. Ali Thmir Abood wanted to give a brief security report while he was there, though, so he started describing the situation, including some problems with local "Sons of Iraq." Many of those at the meeting are affiliated with the security groups, and some took offense.

Khalid Jorhay Hammad, an assistant to the council&#8217;s chairman, stood up when Abood finished and leveled his own accusations.

It would have been just one more spat in a country notorious for lengthy meetings, except that "Sons of Iraq" members like Hammad will soon be collecting their paychecks from Abood and his fellow soldiers.

Starting in October, Baghdad&#8217;s "Sons of Iraq" groups will come under the authority of an Iraqi government that has often been outright hostile to them. The move is designed, in part, to help Iraqi security forces and the U.S.-funded groups work better together, but the relationship between the two sides in some areas remains precarious as the transition looms. The problems could portend trouble for a program whose smooth transition many people &#8212; including Gen. Ray Odierno, the new U.S. commander in Iraq &#8212; say is essential to preserving hard-won security gains.

The "Sons of Iraq" were born out of the Sunni "Awakening" movement. Former insurgents pledged to renounce terrorist groups, secure their own communities and cooperate with coalition forces. Just as importantly, it offered badly needed jobs and community involvement to poor Sunnis who felt the Shiite-dominate government had left them out of the political process. Americans now pay nearly 100,000 of the Iraqi men and women, including many Shiites, to man checkpoints across the country.

But Shiite leaders in the Iraqi government &#8212; already uncomfortable with the groups&#8217; growing political presence &#8212; say they are just militias in disguise and have been pushing to disband them. The disagreements have created tensions, not just between Iraqis, but between the Americans and the government they&#8217;ve spent so much time trying to strengthen.

"Sons of Iraq" leaders in the Jihad area, for example, accuse government forces of targeting them without cause. One leader complained to Abood that the Iraqi Army needlessly detained and beat four of his men.

Such threats aren&#8217;t idle. One neighborhood that was once the home of Ba&#8217;athist officers no longer has any "Sons of Iraq."

Abood protested that he had warrants to arrest the "Sons of Iraq" members and must arrest those who are wanted, and that the law ensures he doesn&#8217;t just go around arresting people without cause.

The "Sons of Iraq" program was never intended to be permanent. Americans seized on the movement during Iraq&#8217;s sectarian fighting as a way to bring peace to certain areas. The goal has always been to one day create an Iraq that didn&#8217;t need young men with guns on every street corner.

"The latest change in the &#8216;Sons of Iraq&#8217; program is a direct result of its success," a Multi-National Division &#8212; Baghdad news release stated. "Security gains, achieved in part by SOI contributions, have reduced the need for the program."

For now, the "Sons of Iraq" duties in Jihad aren&#8217;t expected to change much, although some may be shifted from guarding roadside checkpoints to securing neighborhood advisory councils.

The biggest change ideally will be in their relationship with Iraqi security forces. "Sons of Iraq" leaders work closer with the Americans than the Iraqi Army, said Capt. Mike Garling, commander of Company E, 1st Battalion, 22nd Infantry Regiment. When they get a tip, they give it to Garling, whose unit controls much of the Jihad area. He must then notify his Iraqi Army counterpart. Garling hopes the "Sons of Iraq" leaders will be more willing to cut out the middleman and go right to Iraqi Army leaders with the information.

Money will be an extremely visible symbol of the change that&#8217;s taking place.

In the past, "Sons of Iraq" members collected their pay on the American side of Joint Security Station Jihad, a base Company E shares with its Iraqi Army partners. The Americans gave bags of cash to "Sons of Iraq" leaders and oversaw them as they dispersed the stacks of money to their men.

The Americans have recently begun involving the Iraqi Army more. An Iraqi soldier now stands by to observe the Americans as they distribute the money through the "Sons of Iraq" leaders. Starting Oct. 5, the Iraqis will take over and the Americans will step into the background. The payments will also take place on the Iraqi side of the base. The change is one that American soldiers hope will send a clear message that this is an Iraqi government project now.

But Abood doesn&#8217;t want to see the coalition forces step away from the "Sons of Iraq" completely because he fears the groups would not work without an American presence. Even with the current arrangement, he noted, they often man their checkpoints only when they see American patrols or Humvees coming down the road, a complaint American soldiers across Iraq frequently echo.

He would prefer to hire "Sons of Iraq" members directly into the official Iraqi security forces instead of keeping the groups intact. American leaders and the Iraqi government are trying to do this. But progress has so far been slow, and that&#8217;s sparked further accusations that the government is neglecting the groups for sectarian reasons.

Certain education and health requirements disqualify many would-be recruits. Civil works programs, including one scheduled for the Jihad area in October, aim to get around this by offering employment outside of the security forces and job skills training.

Paradoxically, both Abood and Hammad say they are happy about the two sides working together &#8212; despite the accusations each has thrown at his counterparts.

Perhaps the truest words were those Abood uttered as he concluded his security report. "I need your help; I need your assistance," he told the council. "This is all for your benefit, the benefit of the people."