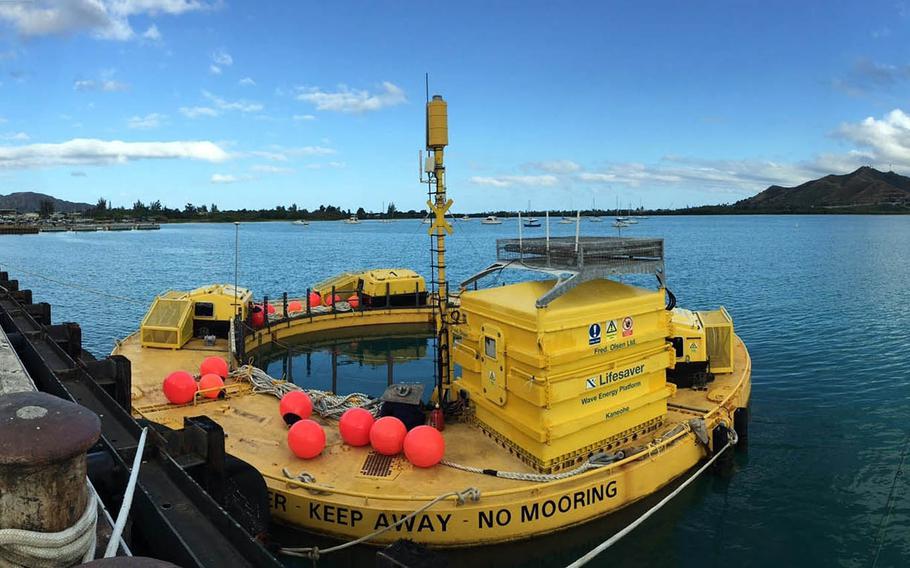 The Navy tested this buoy, which converts the energy generated by passing waves into electricity, in March at Marine Corps Base Hawaii, Oahu. (U.S. Navy photo)

America should lead the world in the transition from fossil fuel-based energy to advanced renewable sources because the new technologies will directly affect national security, a defense think tank said in a report released Tuesday.

Those advanced sources will play a part in shaping the roles and missions of the military, as well as affect the military’s ability to perform them, said the report published by the Washington, D.C.-based CNA and written by an advisory board of retired flag and general officers.

“In forward operations, advanced energy can reduce the logistics burden — lowering costs in lives and dollars,” the report said. “At bases and installations around the world, it can improve resilience and lower energy costs. Installations at home and abroad are increasingly dependent on energy for real-time command and control, remote operations of unmanned air and ground units, and intelligence analysis.”

Growth of advanced energy technology is also likely to pay dividends for the American military in ways that can’t be foreseen.

“Throughout history, with each significant revolution in technology, the nations that adopted it most effectively have achieved profound military advantages,” the report said.

The development of the railroad and the telegraph in the 1800s revolutionized military transportation and communications, for example. The perfection of sonar by the U.S. and Great Britain turned the tide against Nazi Germany in the Atlantic during World War II, the report said.

But while China, Russia, the European Union and Middle Eastern nations have implemented national strategies to take advantage of the emerging landscape of advanced energies, the U.S. “has not taken a similar strategic approach,” the report said.

Advanced energy systems — which include wind, solar, geothermal, hydro nuclear and hydrogen — increase the U.S. military’s effectiveness and resiliency in operations “by lowering vulnerable logistical requirements, extending missions by reducing the need for fuel resupply and lowering the number of combat forces needed to protect fuel supplies,” the report said.

Under the Obama administration, the U.S. military — particularly the Navy and Marine Corps — moved significantly toward advanced energies and away from fossil fuels.

The Navy launched the Great Green Fleet initiative, and last year the Navy’s first aircraft carrier group was deployed using a 50-50 blend of fossil and biofuels. As of 2016, the Navy and Marines were getting about half their energy from renewable sources.

President Donald Trump and some top cabinet officials have expressed support for greater use of fossil fuels, particularly coal.

Trump announced June 1 that the U.S. would withdraw from the Paris climate accord, an agreement signed by almost all nations that calls for voluntary reductions in carbon emissions as a means of curbing global warming.

The Center for Climate and Security, a Washington, D.C.-based think tank that is also advised by a group of senior retired military officers, blasted Trump’s decision to withdraw from the accord, citing statements by Defense Secretary Jim Mattis during his nomination hearings earlier this year.

“Climate change is impacting stability in areas of the world where our troops are operating today,” Mattis said. “Climate change can be a driver of instability and the Department of Defense must pay attention to potential adverse impacts generated by this phenomenon.”

The CNA report recommends that the advanced-energy transition be fully integrated into national security and defense strategies.

“The U.S. Departments of Defense, Commerce, Homeland Security, Energy, and State, as well as Congress and the Administration, must recognize that the transition to a new global energy posture with advanced energy systems is already occurring, with national security implications that are consequential and wide ranging,” the report said.