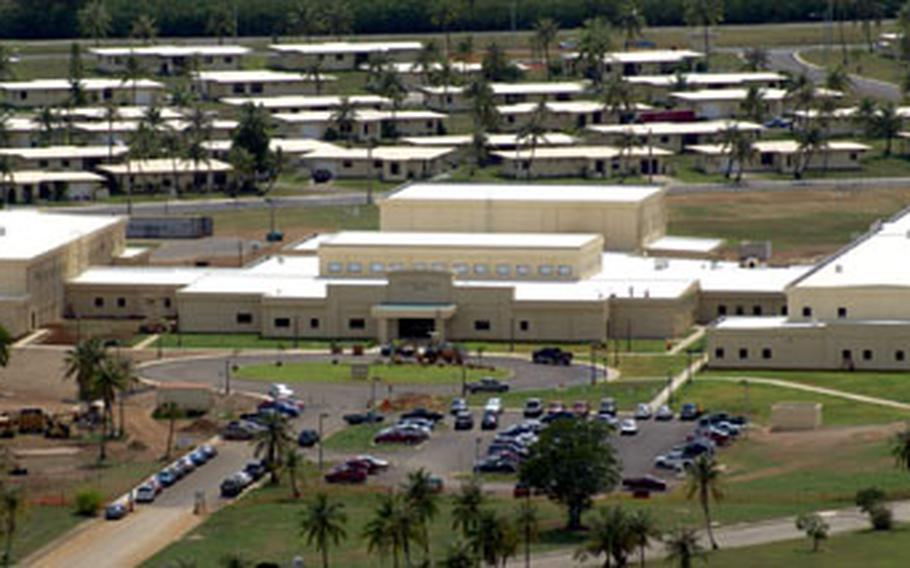 The new McCool Elementary/Middle School on Guam opens Aug. 27. The $38.7 million facility is the last of four schools built by the military on Guam since it opened a school system on the island 10 years ago. (Courtesy of the U.S. Navy)

The first day of classes at the new McCool Elementary/Middle School will be the end of a chapter for the military&#8217;s school system on Guam.

Ten years ago, military leaders on the island decided to pull their children and their funding from Guam&#8217;s public school system. At the time, parents and commanders were worried the Pentagon&#8217;s multimillion-dollar investment in the school system returned poor test scores from worn facilities rather than academic achievement, military school officials said.

The hurried move in the summer of 1997 caused bad feelings among some island leaders. It also sent the military and its worldwide school system scrambling to assemble enough teachers, supplies, desks and classroom space for opening day, officials on Guam remembered this summer. It even had a mission name: Operation Bright Vision.

Now, with the opening of the $38.7 million McCool near the Navy&#8217;s main base on Guam, the transition is complete. The days of teaching in converted barracks and a patchwork of buildings are over.

"When we first got started, we were all over the place," said Sue Burdick, assistant superintendent of schools on Guam. With McCool, she said, "this will be the last one."

McCool will open Wednesday, two days later than the other Domestic Dependent Elementary and Secondary Schools on Guam to give teachers a chance to move into their rooms, Burdick said. All told, there are four schools in the district &#8212; two at Andersen Air Force Base and two on Navy bases run by Commander Naval Forces Marianas &#8212; with about 2,600 students.

Last fall, a $27.5 million high school opened for the DDESS district on Guam. In 2001, two new schools for grades pre-K through eight opened in a joint $50 million project.

This fall DDESS-Guam will have roughly the same enrollment as it did 10 years ago, according to Greg San Nicolas, who joined the school district in the beginning and is now the director for special education.

Before the base schools opened, San Nicolas had worked at the University of Guam and as a recruiter for teachers in the Guam public school system. Hard feelings lingered when San Nicolas and other local teachers went to work for the military, he said this summer.

But many of those feelings have faded, he said. Now the districts compete with each other in sports. Servicemembers volunteer at local, off-base schools. And the district often gives away furniture and equipment as replacements arrive, San Nicolas said.

Even as the new McCool school was preparing to open, the district was getting ready to pass along more equipment to the local schools to make way for new supplies in the new facility, officials said.

The new school has a science lab, a media center and a kiln facility and comes fully wired for Internet, Burdick said. It has three playgrounds, a soccer field, an outdoor basketball court and an indoor gym. Most classrooms have bathrooms, sinks, counter tops and a water fountain, according to Katie Ellis, of the Naval Facilities Engineering Command Marianas.

The school also has separate parking and pull-in areas for school buses and parents, and a main entrance that is more secure than the old barracks building, Burdick said.

The students will also take over as the caretakers for a Marines memorial on the campus, Burdick said. During World War II, when more barracks covered the area, many Marines died, she said. Now, there is a monument and three flags &#8212; one each for the United States, Guam and the Marines.

"Our children will raise those flags every day," she said.