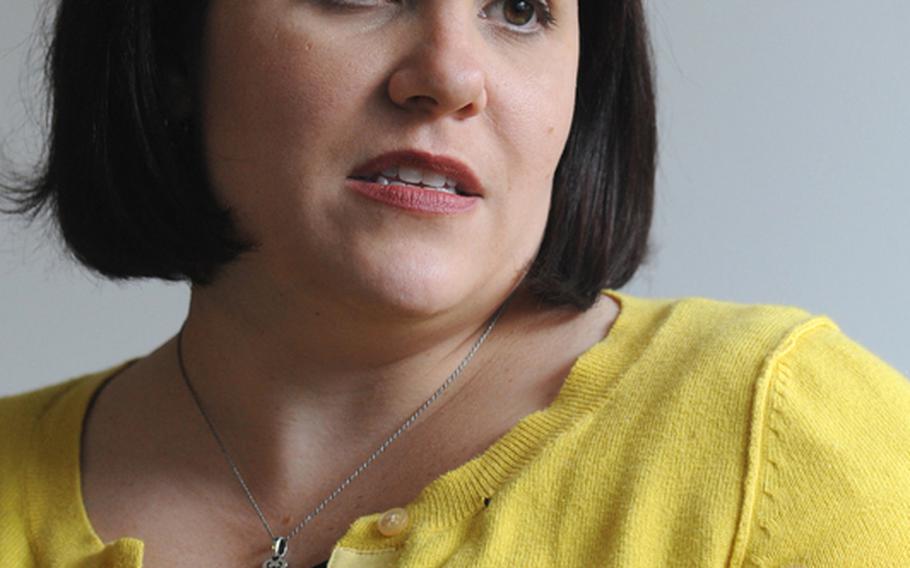 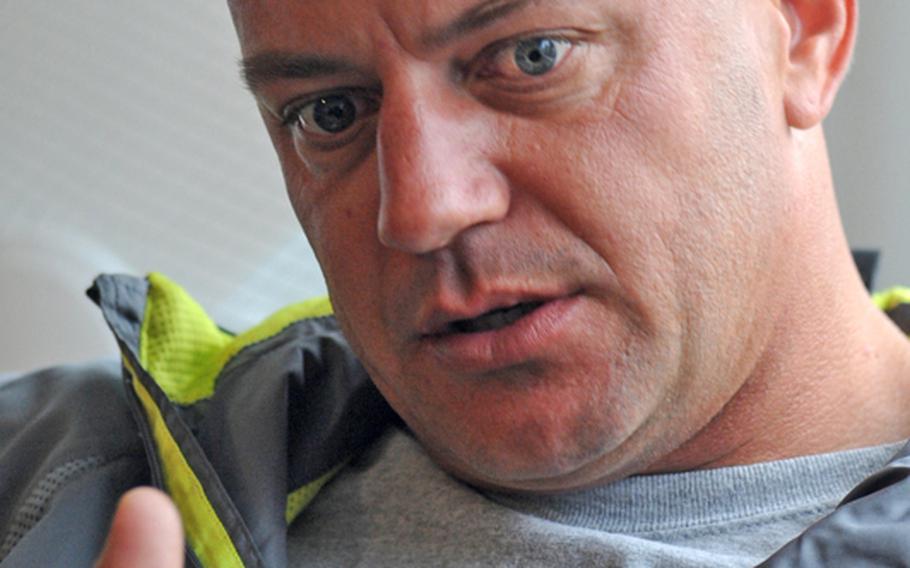 Buy Photo
Senior Master Sgt. Chris Schott, flight chief for the 506th EOD Company members who were at the Deployment Transition Center at Ramstein Air Base, Germany, in August. (Michael Abrams/Stars and Stripes) 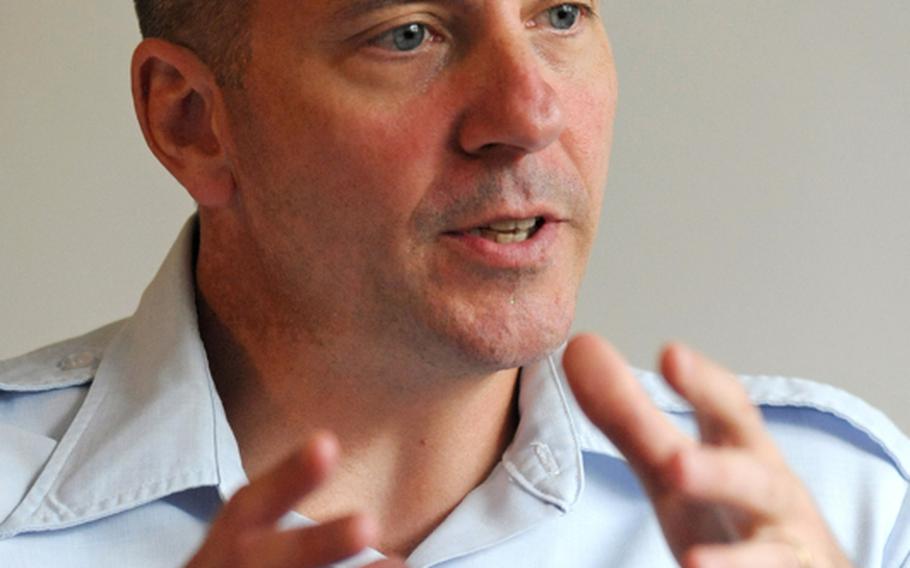 RAMSTEIN AIR BASE, Germany &mdash; The Air Force has opened a $5 million Deployment Transition Center at Ramstein as part of a new &ldquo;airman resiliency&rdquo; program launched by the service to stem rising suicide and post-traumatic stress disorder numbers.

Since it opened this summer, more than 450 airmen from across the Air Force have passed through the center on their way back from Iraq or Afghanistan. The Air Force believes the airmen who spend time &ldquo;outside the wire&rdquo; in a combat zone need time to decompress before returning to their assigned units and families.

Mandatory for security forces, explosive ordnance disposal and convoy operations, the program gives airmen who have deployed together one last time to talk about their shared combat experiences and the challenges they may face as they transition back to Air Force life.

Airmen attend classes, have the chance to meet individually with a chaplain or mental health worker, and take an outing to Trier or Heidelberg to get used to crowds far from war.

&ldquo;Even if we don&rsquo;t get anything out of it clinically, I think the winding down and rest itself is more than enough,&rdquo; said Senior Master Sgt. Chris Schott, the flight chief for the 506th EOD Company members who were at the Ramstein center in late August.

&ldquo;We need to get civilian clothes on, get a real meal, a real shower, and sit around with one another outside of the uniform, outside of the combat vehicle.&rdquo;

The airman resiliency program was unveiled earlier this year as the Air Force, like the other services, looks for ways to combat rising suicide numbers. As of Sept. 10, 37 active-duty airmen had committed suicide in 2010, showing little improvement from last year&rsquo;s 41 suicides, which was the highest annual total in three years.

PTSD cases, meanwhile, have more than doubled in five years. From 2003 to 2008, the number of airmen diagnosed with PTSD climbed from more than 600 to more than 1,500, with more than 78 percent of the new diagnoses stemming from deployment-related events, according to June testimony from Air Force Vice Chief of Staff Gen. Carrol H. &ldquo;Howie&rdquo; Chandler before the Senate Armed Services Committee. Over the same period, there has been an increase in the number of medical visits for PTSD, from more than 3,800 in 2003, to more than 14,300 in 2008.

And while there doesn&rsquo;t appear to be a statistical link between deployment and suicide &mdash; only about 20 percent of Air Force suicide victims had deployment experience within the last year &mdash; &ldquo;it&rsquo;s definitely a stressor,&rdquo; said Capt. Heather DeShone, the Ramstein transition center&rsquo;s program manager. Chandler in his testimony noted that among airmen who took their own lives, nearly two-thirds had not sought assistance from a mental health professional. Air Force officials expect the center staff to take care of about 2,200 each year.

Unlike the Army where units head to combat zone together, airmen typically deploy from different bases and units, and may not see each other again after returning home, DeShone said.

Before the center opened, airmen stressed by combat had no mechanism to catch problems before they escalated &ldquo;other than &hellip; here&rsquo;s a list of things you have do before you can have your time off,&rdquo; DeShone said. &ldquo;What is your average airman going to do? They&rsquo;re going to do that list as quickly as possible so they can take their leave.&rdquo;

Schott knows that drill all too well.

&ldquo;It will be a room full of people who are all trying to get the signature on their checklist so they can say, &lsquo;I&rsquo;ve in-processed.&rsquo;&thinsp;&rdquo;

Schott, 41, admitted he was apprehensive when he learned his team would have to attend the program.

&ldquo;My initial thoughts were I didn&rsquo;t want any extra days on the end of my deployment before I got home,&rdquo; he said.

But two and a half days into the program, his outlook was different.

&ldquo;We do our own decompressing every night and every morning just through conversation. I think that&rsquo;s important before we say goodbye and go our separate ways,&rdquo; he said.

A chance to talk

On the first day, airmen discuss whether their training or equipment was adequate, how the mission was executed, with recommendations going directly to Air Force leaders at the Pentagon, officials said.

&ldquo;The key is to help them transition past the battlefield,&rdquo; said DeShone, who is among the mental health specialists and chaplains on loan from other organizations at Ramstein and in the Air Force. The transition center has three permanent workers and also employs 20 career field facilitators, recently deployed airmen from security forces, EOD and convoy operations, to lead airmen in group discussions.

Senior Airman Justin Waterman, 25, a military cop with the 2nd Security Forces Squadron at Barksdale Air Force Base, La., said he was able to get a few issues off his chest when going through the program in late June, after a 10-month deployment to Iraq.

&ldquo;It was nice to leave it there in Germany and not bring it back with me,&rdquo; he said from Louisiana.

The last day of classes is for &ldquo;the touchy-feely&rdquo; stuff, DeShone said. &ldquo;This is a time to tell their story together as a team and bring it to an ending together.&rdquo;

Emotions vary depending on what happened on the battlefield.

&ldquo;We brought an injured cop back from the States to meet with his team,&rdquo; said Chief Master Sgt. John Western, the center&rsquo;s superintendent. &ldquo;It was very emotional for these guys. The last time they saw him he was bleeding on the battlefield.&rdquo;