Transient troops get a place for pets 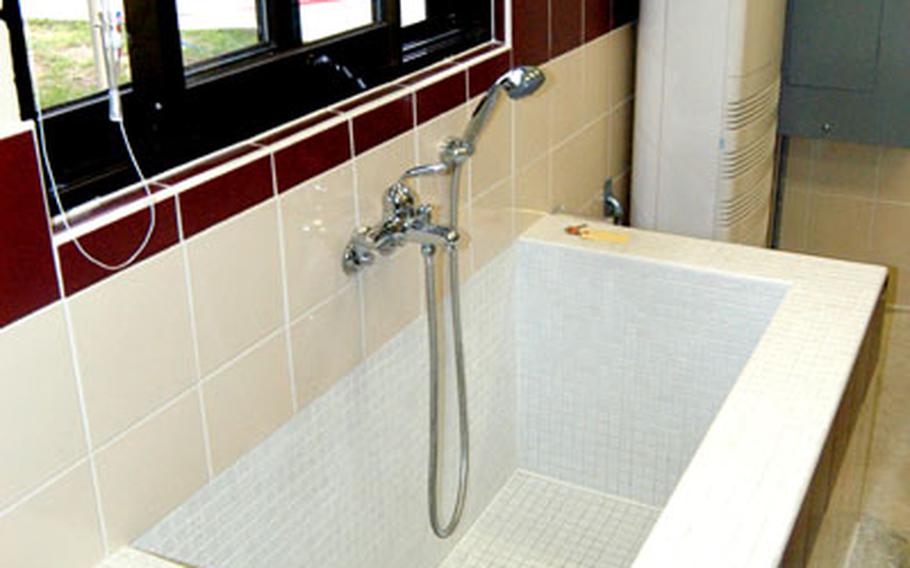 One of the tubs for bathing pets at the newly opened self-help kennel at Camp Walker. (Galen Putnam / U.S. Army)

When soldiers arrive for duty in Taegu, South Korea, chances are they&#8217;re jet-lagged and ready for a good night&#8217;s sleep.

If their pets made the flight over with them, no doubt they&#8217;re worn out, too, especially after being cooped up for hours in the air.

But now, those new arrivals can put their dogs or cats in a clean, safe, self-help kennel right at Camp Walker, only yards from the Walker Army Lodge, where most transients stay, and next door to the post&#8217;s veterinary clinic.

The one-story, cement-block structure is set up with three 25-foot kennels for big dogs and six cages for smaller dogs and cats. Owners can bathe their pets in a large tub or small sink, and use hoses for spray-down cleaning. The building also is equipped with a ventilation system to reduce pet odors, and with year-round temperature control &#8212; heat in cold weather, air conditioning when it&#8217;s hot.

The free kennel, available to active-duty soldiers and Defense Department civilians, operates on a first-come, first-served basis, Jackson said in a telephone interview.

Joyner ends his two-year Taegu tour Thursday and will leave for a new assignment.

Construction of the $52,000 kennel began in May, said Jackson. It opened July 1. The Area IV Support Activity funded the project out of the $500,000 cash award it received after being chosen the Department of the Army Communities of Excellence 2003 silver finalist.

&#8220;We looked at different ideas and decided on a self-help pet care center near the lodge where people can be nearby to walk, feed, water and wash their pets,&#8221; Joyner said. &#8220;It will be much more convenient than having to go downtown when you have transportation and language barriers, not to mention the expense of kenneling a pet.&#8221;

Pet owners wanting to use the kennel can pick up keys at the Walker Army Lodge. They&#8217;ll be given keys to the building and to their pet&#8217;s cage.

The building has enough room for more cages to be added later, according to James Hamilton, Area IV interim director of public works.

&#8220;The building is designed for ease of cleaning and has room to grow if usage warrants,&#8221; Hamilton said in the news release. &#8220;All pet owners need to do is bring their own pet food and shampoo. Since it is self-help, people will have to make sure to keep the facility clean.&#8221;