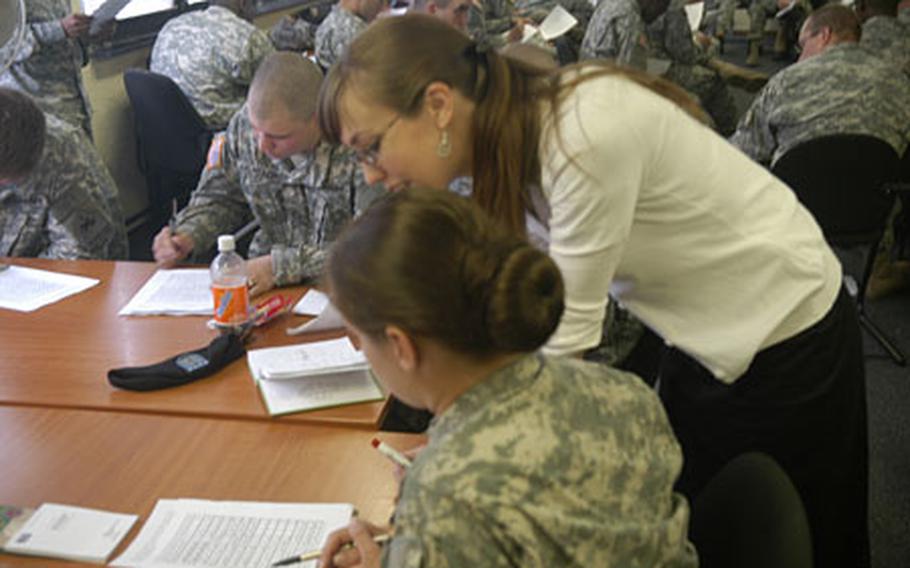 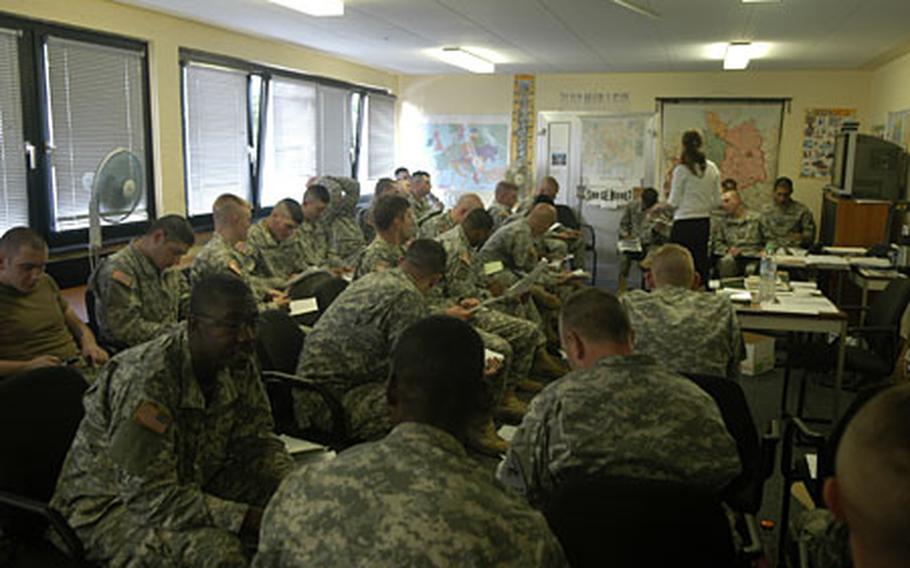 Soldiers are taking part in a weeklong, four-hour-a-day course on Iraqi culture and language. About100 soldiers were selected for the class. (John Vandiver / S&S)

BAUMHOLDER, Germany &#8212; As the 2nd Brigade Combat Team, 1st Armored Division prepares for its upcoming deployment to Iraq, the focus is on more than weapons and traditional warfighting exercises. Cultivating &#8220;culture experts&#8221; is also part of the plan.

About 100 Baumholder soldiers are taking part in the Iraqi Headstart program, a weeklong crash course in history and language aimed at helping soldiers bridge the cultural divide when they deploy.

In the past, such programs have been directed more toward higher-level noncommissioned officers and officers, said Maj. Pat N. Kaune of the 2nd BCT headquarters.

Now the 2nd BCT is making sure junior enlisted members are being enrolled in the program, where they learn about the origins of sectarian strife, cultural taboos and the alien sounds of Arabic.

The objective, Kaune said, also is to train as many soldiers as possible so that every platoon will be an effective ambassador as it patrols Iraqi neighborhoods. In January, shortly before the brigade deploys in early 2008, another group of soldiers will be selected for the training.

White said leaders within each battalion have worked to identify soldiers who possess an aptitude for language and a cultural curiosity.

The hope is to have a network of soldiers capable of communicating on a deeper level than reading off language pamphlets. &#8220;We need people out there who understand the nuances,&#8221; White said.

Pfc. Steve Cleburn, of 4th Battalion, 27th Field Artillery Regiment, was among those selected for the class.

&#8220;By being more aware, we can probably avoid some of the problems,&#8221; added classmate Pfc. Keeton Tucker, referring to various gestures and taboos to be avoided.

Linnea Tippett, the course instructor, said that&#8217;s the purpose of her class.

But on Tuesday morning, the class was focused on the basics.