Training tunnel will keep US soldiers returning to front lines in S. Korea 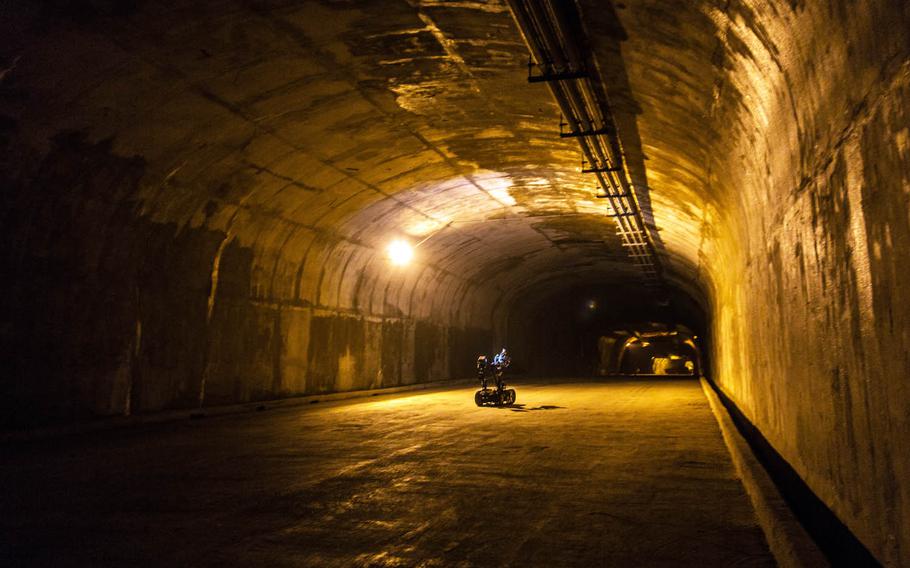 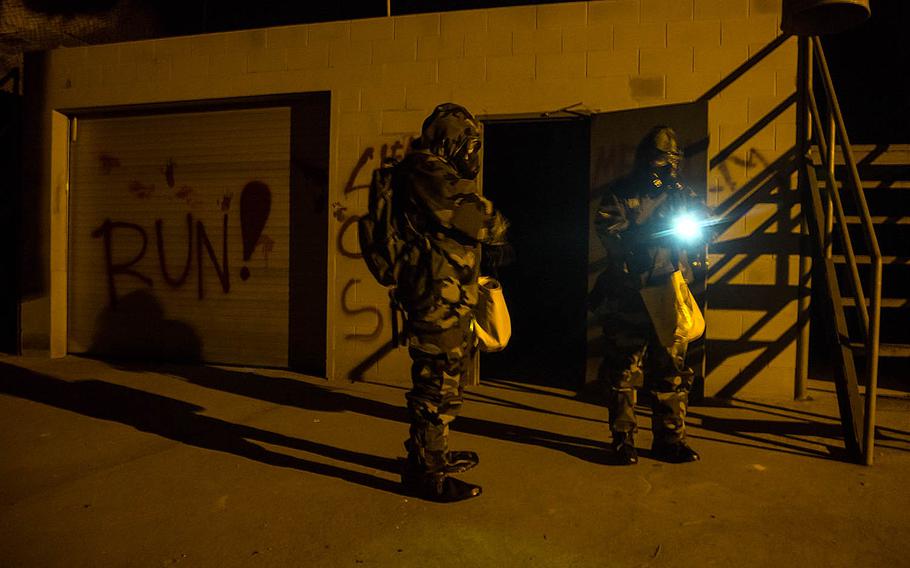 A pair of soldiers from the 23rd Chemical Battalion search for simulated chemical weapons at the underground training facility on Camp Stanley, South Korea, Tuesday, May 23, 2017. (Marcus Fichtl/Stars and Stripes) 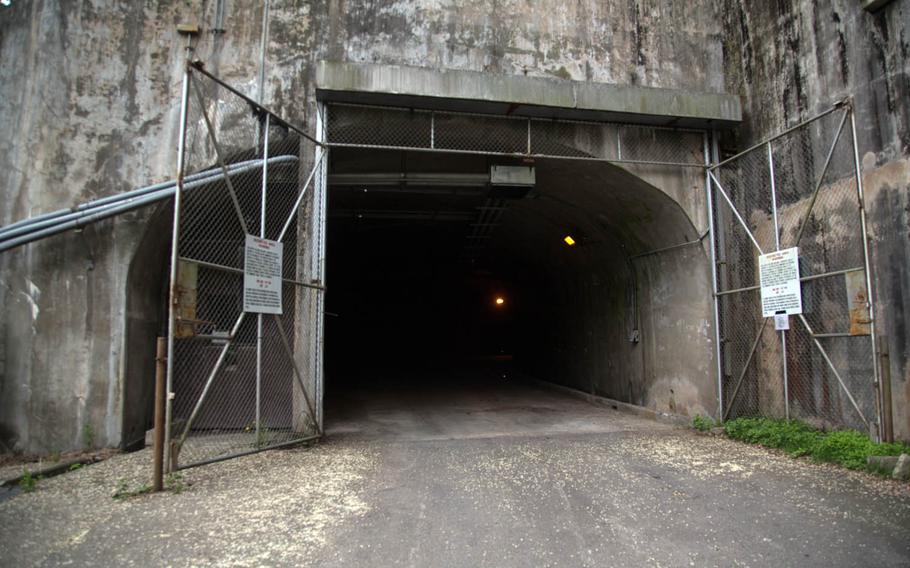 The entrance to the underground training facility at Camp Stanley, South Korea, Tuesday, May 23, 2017. (Marcus Fichtl/Stars and Stripes) 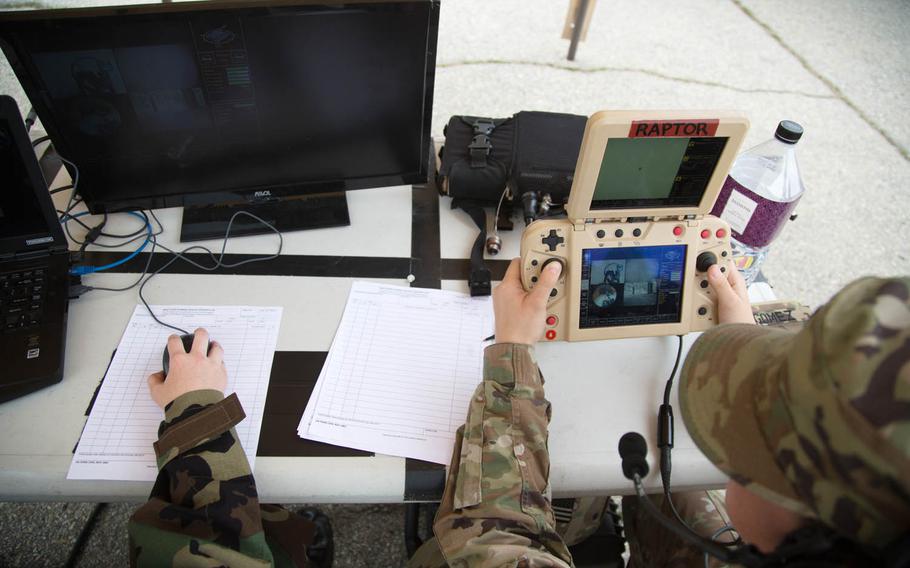 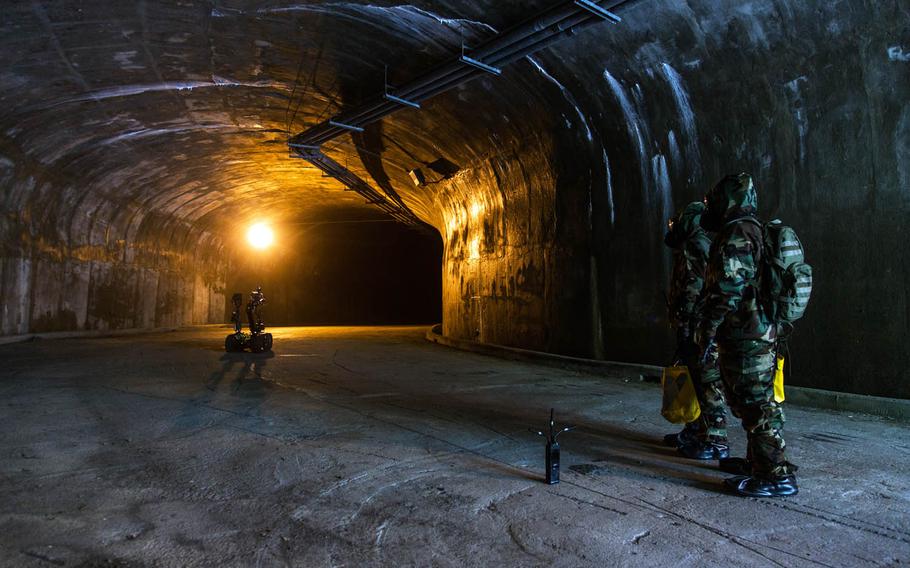 Soldiers from the 23rd Chemical Battalion and a chemical-sniffing robot enter the underground training facility at Camp Stanley, South Korea, Tuesday, May 22, 2017. (Marcus Fichtl/Stars and Stripes) 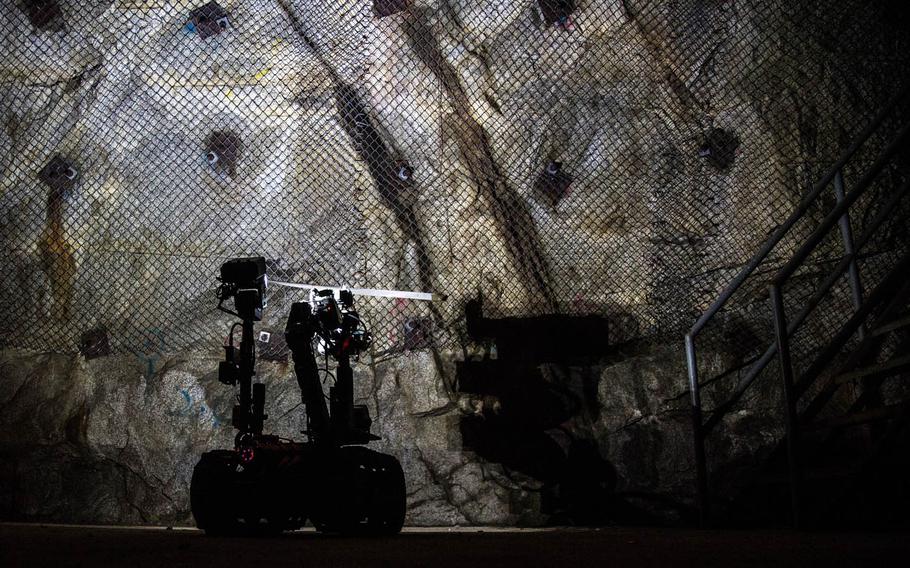 A chemical-sniffing robot investigates a site at the underground training facility at Camp Stanley, South Korea, Tuesday, May 23, 2017. (Marcus Fichtl/Stars and Stripes)

CAMP STANLEY, South Korea — Boxes have been packed and nails stick out from walls where pictures and maps used to hang.

U.S. soldiers are getting ready for a historic move from the front lines to new quarters south of Seoul, South Korea, as part of a relocation plan that has been in the works for more than a decade.

But there’s one important feature they can’t take with them — a half-mile tunnel carved into a mountain that rises above Camp Stanley, which has been home to 2nd Infantry Division units since shortly after the 1950-53 Korean War.

North Korea is known to have an extensive network of tunnels and underground facilities used for suspicious purposes, including infiltrating the South, protecting the reclusive regime and conducting nuclear tests.

The communist state also is believed to be hiding its stocks of artillery as well as chemical and biological weapons in reinforced caves.

Training for the possible need to search and clear such facilities is high on the agenda for U.S. and South Korean forces. But it’s about to become more challenging for the 23rd Chemical Battalion, which is preparing to move to Camp Humphreys, about 55 miles south of Seoul, this month. It will retain access to the tunnel, although it’s unclear how that will work without a regular presence on the base.

Better planning Instead of just walking up a slope — albeit a very steep one — to get to the tunnel, soldiers will have to plan for a mission including travel and logistics to get to the underground facility, or UGF.

“Now, when the units want to go train, they have to do the full training model” to get to the tunnel, battalion commander Lt. Col. Roberto Salas said. “They’ve been spoiled with it being here.”

The tunnel is a microcosm of how complicated the move is for U.S. forces accustomed to being just miles from the heavily fortified border with North Korea.

After years of delays, the U.S. military is preparing to close Camp Stanley and other bases near the Demilitarized Zone so they can turn over the land to the South Koreans. But it will maintain residual forces and features that can’t be replicated in the new hubs in the near future.

U.S. Forces Korea headquarters, for example, is expected to maintain offices on Yongsan and Humphreys since the commander will need to be close to the South Korean leadership.

The 210th Field Artillery Brigade will maintain its positions near the border to guard against North Korea’s firepower since South Korea’s army doesn’t yet have that capability.

Rodriguez Live Fire Range, a 3,390-acre training complex, will continue to be used for exercises as U.S. and South Korean troops need to maintain a constant state of readiness.

Also, soldiers will still make the trek to the tunnel at Camp Stanley, a former ammunition depot that has several alcoves and is perfectly suited for training to clear dark, confined spaces.

It fed information to the soldiers with a CBRNE response team, which was manning a high-tech control center set up under a tent outside.

Capt. Kim Sae, who leads the chemical battalion’s 501st CBRNE Company (Technical Escort), said the robot — which is nicknamed the Raptor — eliminates the need to send soldiers into a possibly hazardous environment.

“It gives a real-time feedback on what it is seeing and what it is sniffing,” he said, adding the robot could even provide a 3-D mapping capability to assist in navigating tunnels.

Alerted to the possibility of a blister agent, two soldiers in protective suits followed the robot to an alcove to take a sample from a 55-gallon drum with something that smelled like Bengay wafting in the air.

The temperature dropped several degrees inside the tunnel, which had lights but was almost pitch black in some places.

Visitors who have made the trip to the DMZ know about the threat of North Korean tunnels. One of the most famous, known as the Third Tunnel, was discovered by South Korean forces in 1978 and is now a tourist attraction.

It’s estimated that about 30,000 soldiers could move through the tunnel per hour, although it’s hard to imagine that pace while hunched inside the cramped and sloping passage.

The Army has tried to map the secret network based largely on defector accounts, and it believes the North has 6,000 to 8,000 underground facilities, including shelters constructed under empty buildings, a South Korean military journal reported in 2015.

The article in the Joint Chiefs of Staff also claimed the U.S. military began training sessions about the facilities in the mid-1990s that were expanded to include a limited number of South Korean military officials in information sessions in 2014.

U.S. Forces Korea has declined to comment on the report, saying it does not discuss operational or intelligence matters.

The report’s author, Maj. Park Sung-man, questioned the reliability of depending on North Korean defectors who may make inaccurate statements based on faulty memories.

“Military operations and training will continue at Camp Stanley until all facilities are completely turned over to [South Korea],” 8th Army spokeswoman Maj. Christina Wright said in an email.

Battalion commander Lt. Col. Roberto Salas said tunnels near Camp Humphreys may provide an alternative in the future, but they aren’t yet ready for use.

“They’re doing some hazmat remedy issues there. There are some asbestos issues, so we don’t think that’ll be available to us for a while, but in the future it will be, and so I’m really excited about it,” he said.