Training is paying off in Afghanistan, says Kamiya 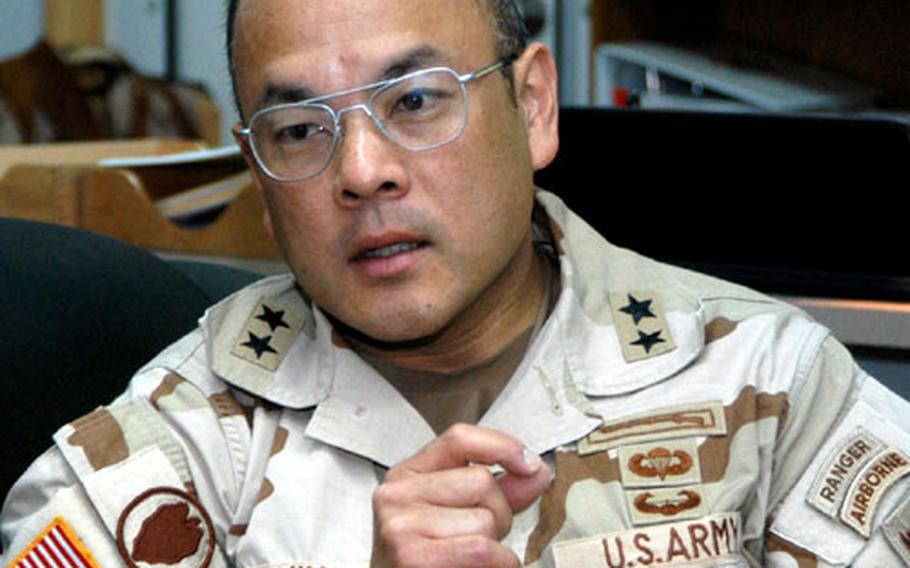 Maj. Gen. Jason Kamiya, commander of Combined Joint Task Force-76 and the Southern European Task Force, during an interview with Stars and Stripes at Bagram Air Base, Afghanistan, on Monday. (Michael Abrams / S&S)

BAGRAM AIR BASE, Afghanistan &#8212; Three weeks after taking command of the majority of American forces in the country, Maj. Gen. Jason Kamiya says training undertaken in Germany before the deployment is paying off.

And he hinted at upcoming operations as the weather improves.

&#8220;If there is going to be a spring offensive, then let it be ours,&#8221; said Kamiya, commander of Combined/Joint Task Force-76. &#8220;We have very good intelligence. We know what [anti-coalition forces are] doing. They will soon feel the effects of an offensive of our own.&#8221;

Temperatures have been climbing recently and some of the heavy snow the country received this winter has melted. Fighting traditionally picks up in country when the weather improves. Kamiya declined to provide specifics. But he said actions would not be limited to airborne troops from the 173rd Airborne Brigade and 1st Brigade, 82nd Airborne Division.

Other Army assets as well as contributions from the Air Force, Marines and coalition and Afghan allies would all be used &#8220;to achieve the desired affect on the battlefield.&#8221;

Thanks to a pair of comprehensive exercises at the Grafenw&#246;hr Training Center in Germany before deployment, Kamiya said, soldiers, airmen and Marines have been well prepared for conditions in the country.

&#8220;The biggest challenge for us is to realize when the environment changes,&#8221; Kamiya said in an interview this week.

Kamiya said specialized forces are searching for &#8220;high-value targets&#8221; around the clock. But he said the most important battles are for the hearts of the Afghan people &#8220;not only for the coalition, but support for their own government.&#8221;

The coalition is doing that, he said, in several ways. It continues to train Afghan police and soldiers. New forward operating bases have been established and others are planned. Patrols leave from them continually. And coalition forces, together with government and nongovernmental agencies, are funding millions of dollars in projects around the country.

Kamiya said he couldn&#8217;t provide a specific list of accomplishments he hoped his forces would achieve. He said events such as the parliamentary elections in September are just &#8220;milestones&#8221; and the coalition has to look further ahead than that.