Training in Romania is homecoming for four U.S. soldiers 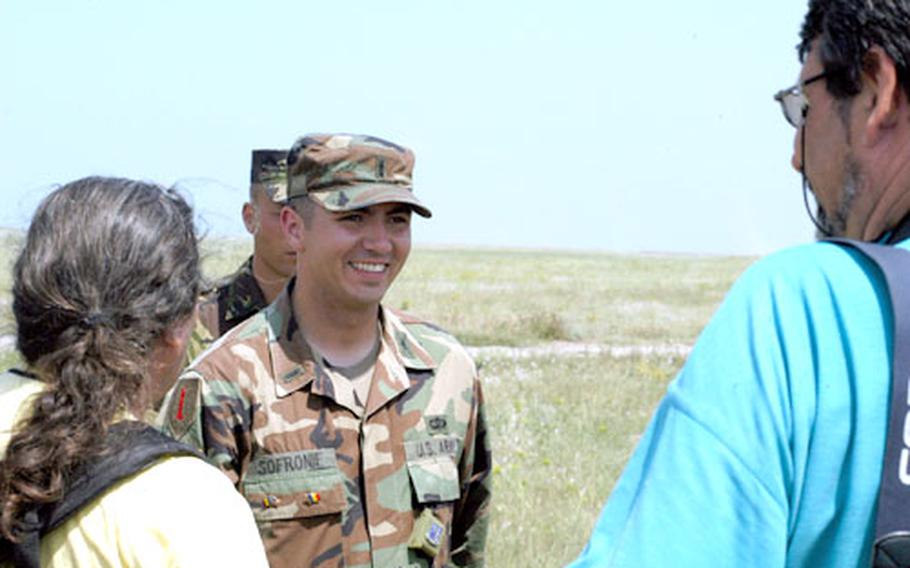 First Lt. Mihai Sofronie, with the 177th Armored Battalion, 2nd Brigade out of Schweinfurt, Germany, speaks with Romanian journalists in Babadag Training Area, Romania, on Sunday. Sofronie, who was born in Romania, serves as a personal aid to the ROMEX ’05 commander. (Russ Rizzo / S&S)

BABADAG TRAINING AREA, Romania &#8212; For most of the 1,000 U.S. troops training in Romania this month, communism is just a vague concept. But for four of them, it is something very real.

Three soldiers taking part in ROMEX &#8217;05 were born in Romania while it was still a communist country. The fourth grew up in bordering Moldova, a former communist country that was once part of Romania.

Three of the troops were drawn from Germany to work as translators for the exercise. The other is training with the Texas National Guard unit alongside Romanians.

Spc. Angela Corlateanu, of the 1st Personnel Command in Bamberg, Germany, grew up in a clay one-story house in Moldova that had two main rooms &#8212; a bedroom where a coal stove provided the house&#8217;s only heat, and a kitchen. She bathed once a week in a community bath, often in mud up to her shins because there were no roads.

In 1998 Corlateanu jumped on her first chance to leave the country. After attending a management school in Bucharest, she took off for Maryland, and worked various jobs before becoming convinced she could make it in the U.S. Army.

Sgt. Marius Ciubucciu, of the 127th Transportation Battalion in Baumholder, Germany, grew up in a large city about 60 miles north of Babadag.

Karate was banned under communism, but Ciubucciu practiced anyway, sneaking into a school gym at night with his friends.

A member of the secret police pulled Ciubucciu aside at school one day and asked him to explain what he was doing in the gym. Ciubucciu responded that he was stretching his muscles.

Communism fell after a revolution in 1989. Ciubucciu, 31, went on to become a three-time European karate champion and a crime scene investigator at his hometown police department.

By all accounts, he led a comfortable life. But he yearned for a challenge. So in 2001, with no job and no knowledge of English, he headed to Greensboro, N.C., where his cousin lived. Ciubucciu found himself unemployed months later, after the terrorist attacks of Sept. 11, so he joined the Army for better opportunities.

The other two soldiers working at ROMEX &#8217;05 grew up hearing similar stories from their parents.

First Lt. Mihai Sofronie of the 177th Armored Battalion, 2nd Brigade out of Schweinfurt, Germany, left Romania when he was 2.

Sofronie&#8217;s dad played rugby for the Romanian national team, which meant he was able to leave the country more freely than most. So one day, he took a trip to Chicago and never returned.

A year later, Sofronie and his mother won a national lottery for visas that allowed them to travel to the United States.

Sgt. Bogdan Stanei, of the Texas National Guard&#8217;s 1st Battalion, 112th Armored Regiment, left for Dallas when he was 8, two years after the revolution freed his country from communism.

He has fleeting memories of playing in streets in his hometown of Navodari, about 55 miles from Babadag.

Like many of 400 Romanian soldiers taking part in the exercise, Ciubucciu has memories of his grandfather holding out hope that the U.S. military would arrive in the wake of World War II to save the country from communism.