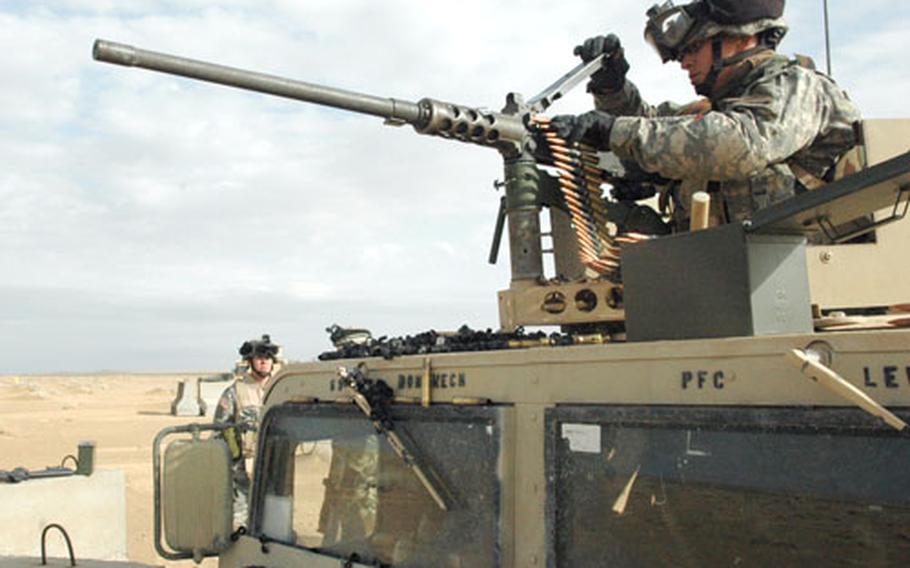 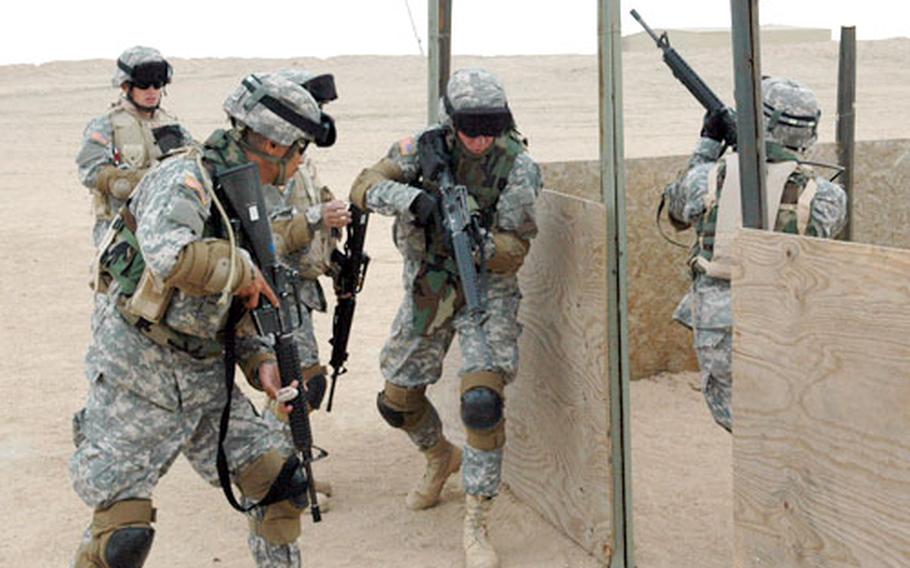 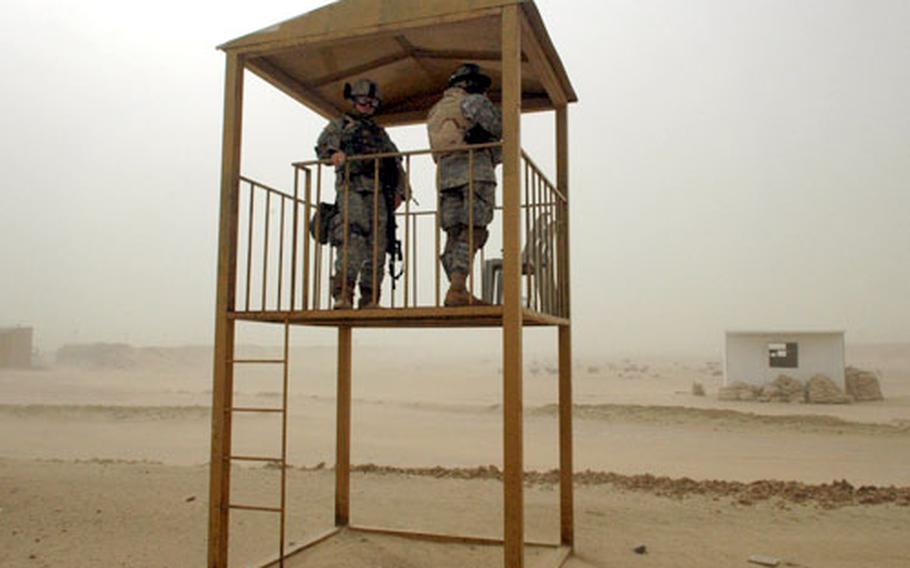 Soldiers from the 1st Armored Division, 2nd Brigade train for manning base entry points at a range outside Camp Buehring in Kuwait. (Andrew Tilghman / S&S)

CAMP BUEHRING, Kuwait &#8212; Pfc. Karen Sanders is a trained medic. But on a recent cloudy and cold afternoon, she and others from her unit were practicing how to kick down doors and secure defensive positions in hostile urban terrain.

While the 22-year-old from Waco, Texas, would most likely spend any deployment in Iraq working in the aid station of a large base, she says these infantry-style skills &#8212; practiced out on the edge of this desert camp in makeshift wooden buildings &#8212; are good to know before heading into a combat zone.

Training for any and all possible scenarios has become the main agenda here for the 1st Armored Division&#8217;s 2nd Brigade, which has spent more than two months at this training camp just 10 miles south of the Iraqi border.

The Baumholder, Germany-based brigade had planned to go to Iraq, but its mission changed after arriving in Kuwait in November. It was told to stay in Kuwait to train and be ready to go north only in case of a crisis.

As a result, soldiers like Sanders have had time and opportunity to train more extensively, fire more rounds, take additional classes and hone skills beyond their traditional duties.

The longer-term presence of the 2nd Brigade at Camp Buehring has prompted officials at the camp to expand their training programs beyond the basic drills provided for units moving through in just a couple of weeks.

For example, the range has begun hiring locals to role-play in order to create a more realistic environment, some military police units have been testing nonlethal weapons, and soldiers are using electronic sensor devices to simulate complex attacks and casualties.

The 2nd Brigade also has been training soldiers in how to check roads for makeshift bombs, how to provide personal security for individuals and other specialized skills previously taught only at training centers back home.

&#8220;They are accessing all of our systems,&#8221; said Sgt. 1st Class Alan Johnson, the master gunner who oversees the training villages at Camp Buehring.

Pfc. Mitchell Brandt spent one recent afternoon in the gun turret of a Humvee, shooting a large 50-caliber machine gun, although he is mainly trained as an M240 gunner.

There are several advantages to training at Camp Buehring: The desert landscape is more realistic than at training centers in Germany, soldiers are away from home and more focused on their jobs, and there is more time, space and ammunition for extensive training.

However, compared to the training centers in Germany, where facilities are more elaborate and technology more sophisticated, the ranges here can appear rudimentary.

Most units spend at least one day and sometimes more at the various ranges near Camp Buehring. After more than two months, it may begin to get repetitive.

&#8220;Sooner or later, you are going to get bored in Kuwait,&#8221; said Sgt. Maj. Ramon Delgado, a Puerto Rico native and command sergeant major of the 1st Battalion, 35th Armored Regiment.