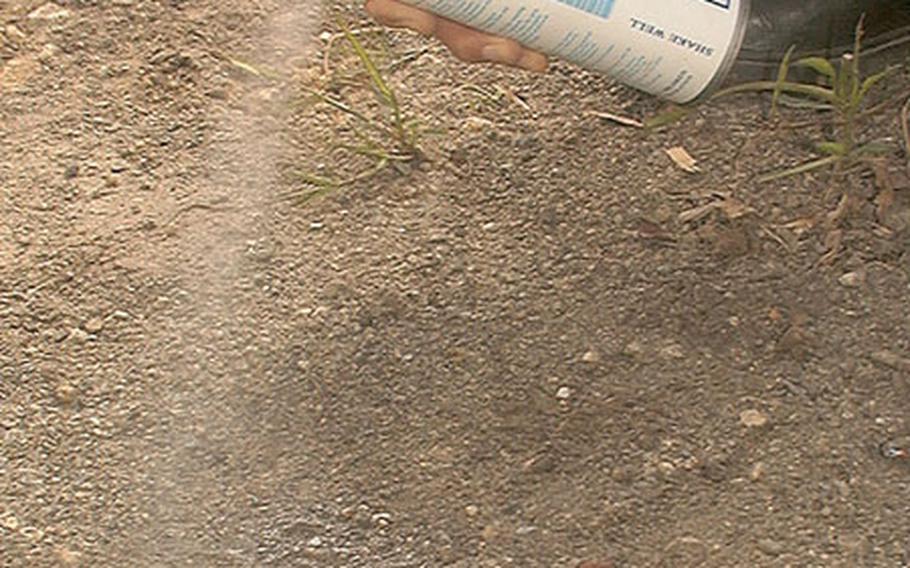 Before making a plaster cast of a footprint, forensic experts spray lacquer over the imprint to keep the wind from blowing the dirt away. (Carlos Bongioanni / S&S)

Before making a plaster cast of a footprint, forensic experts spray lacquer over the imprint to keep the wind from blowing the dirt away. (Carlos Bongioanni / S&S) 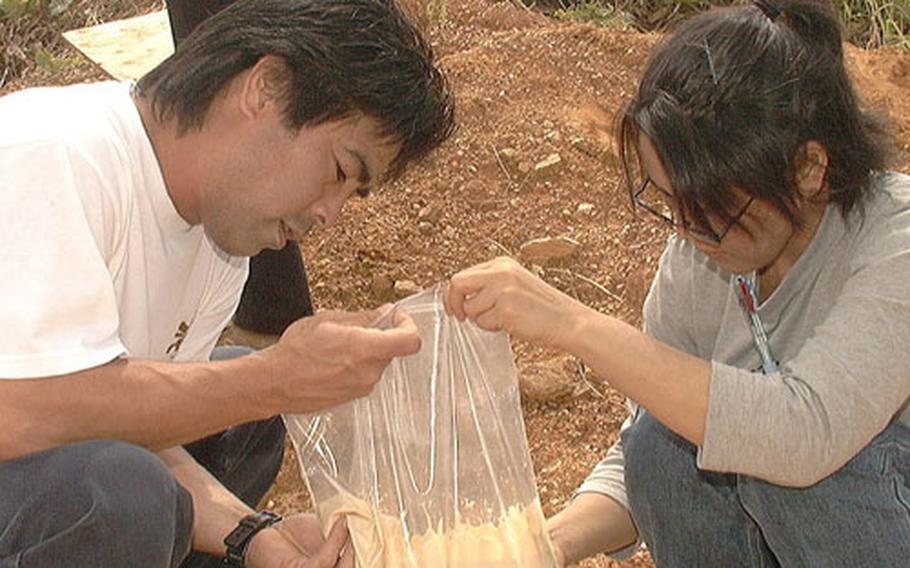 CAMP FOSTER, Okinawa &#8212; Only a trained eye would have seen or even cared about the boot print.

The faint impression on a dirt mound surrounded by tall weeds, in an obscure field, seemed insignificant. Yet last week on Foster, a group of military cops and investigators focused sharp scrutiny on it.

They were in a forensics course, learning to search for and collect evidence from crime scenes.

To preserve the dirt impression, the agent lightly sprayed it with lacquer, showing his 17 students how to prepare the print to cast it, intact, in plaster.

Part of a team that responds to major criminal cases, the two agents said they routinely travel around the Pacific theater and the Middle East. Some months ago, they said, they helped with a bombing investigation in Zamboanga, Philippines.

The weeklong NCIS-sponsored training was the first of its kind in Okinawa since 1998, said Nakasone, NCIS&#8217;s regional forensics consultant for the Far East. He and Rodriguez said they would give the same course in Guam next month.

Normally, agents go through forensics training at a federal training center in Glynco, Ga. But since the Sept. 11 terror attacks, investigative agencies have had to focus more on preventing terrorism and protecting assets, said Nakasone.

Most of the students have had some training in collecting crime-scene evidence but others had not, said Nakasone. &#8220;To a certain degree, we have an obligation to train them,&#8221; he said. &#8220;The material we&#8217;re giving in one week is like feeding them with a fire hose. They&#8217;re learning about crime scene management &#8212; how to document, diagram and photograph evidence. ... It&#8217;s just a basic foundation that gives them the tools to know what to do when solving crimes.&#8221;

To cap the five-day session, NCIS agents created a mock crime scene to test their students&#8217; abilities to collect evidence. &#8220;This course wouldn&#8217;t be effective unless students got hands-on training, not just theoretical stuff you learn in the classroom,&#8221; said Nakasone.

The training should pay big dividends, said Rodriguez. &#8220;It&#8217;s priceless if it helps investigators get evidence to court and leads to a conviction.&#8221;