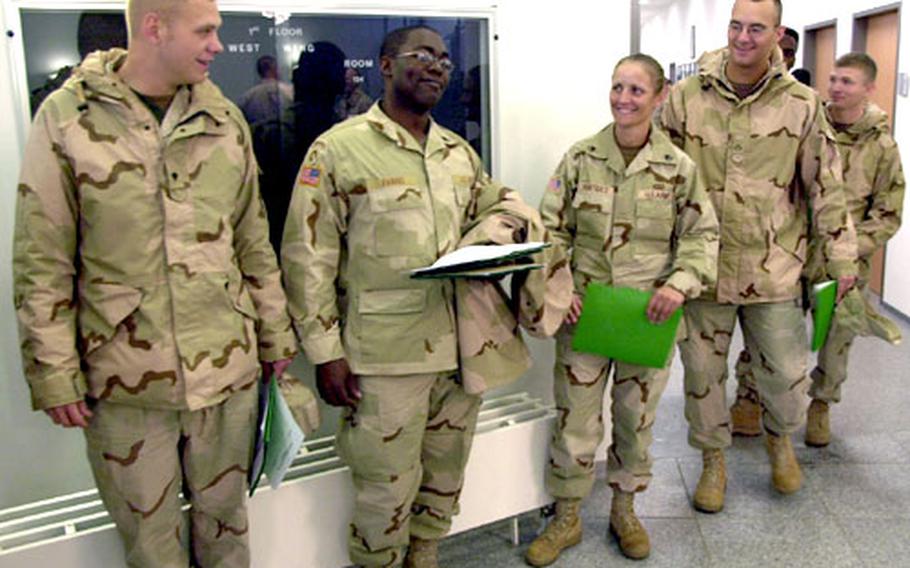 GRAFENW&#214;HR, Germany &#8212; Soldiers from the 11th Transportation Company began a weeklong reintegration program Tuesday designed to get them used to living in Germany after a year in Iraq.

The unit returned last week, just in time for Christmas, and will be followed home to Grafenw&#246;hr and nearby Vilseck by several other units due to finish their Iraq tours over the next few months. Those units include the 94th Engineer Battalion and 535th Engineer Company, due back in January, and the 41st Transportation Company and 71st Medical Detachment, due back in spring, officials said.

U.S. Army Garrison Grafenw&#246;hr plan specialist Henry McNair, who oversees reintegration programs at Grafenw&#246;hr and Vilseck, said several units had been through the process over the past two years.

McNair knows what returning soldiers go through. He deployed to Iraq with the 709th Military Police Battalion in 2003 and had to readjust to life back home on his own, because there was no reintegration program at the time.

&#8220;We stress the difference between operating in the tactical environment in Iraq and mixing with the population here in Germany. We talk about driving on European roads in winter. &#8230; We talk about alcohol. Beer is a big thing in Germany, but there was no alcohol for them at all in Iraq,&#8221; he said.

One day of the reintegration program involves the soldiers&#8217; families, who get briefings from Army Community Services and the chaplain&#8217;s office, he said.

&#8220;They get briefings on welcoming back the family member. It is based on experiences from previous deployments and previous problems,&#8221; McNair said.

Returning soldiers have to take account of changes that occur in their families while they are away and not expect everything to be the same as it was when they left, he said.

Some soldiers undergoing reintegration said the process was an unwelcome intrusion on time with their families during the holidays. &#8220;It kind of sucks,&#8221; admitted Staff Sgt. David Vega, 33, of San Antonio, who spent Christmas with his wife, Pamela, and children &#8212; Ethan, 8, and Madison, 7.

Vega and the other soldiers undergoing reintegration can expect a week of briefings and paperwork, addressing such issues as finance, housing, getting vehicles out of storage and checking identification cards. &#8220;It is making sure everything is G to G (good to go),&#8221; he said.

The medical briefing, which includes a test for tuberculosis, was probably the most important part of reintegration, Vega added, although he did not expect any 11th soldiers had the disease.

Sgt. Antonio Sanders, 29, of Philadelphia, said he wanted to talk to a representative from the Army Career Alumni Program during reintegration because he is planning to leave the Army in April.

The soldier said he plans to travel once he gets out. During five years with the 11th at Grafenw&#246;hr, Sanders has visited the Czech Republic, Poland and the Netherlands but still wants to see more of Europe, he said.

His tour to Iraq taught him at least one thing that will help him in later life: &#8220;Whenever I think my life is down in the dumps, I will think about what I went through out there, and I should be all right,&#8221; he said.