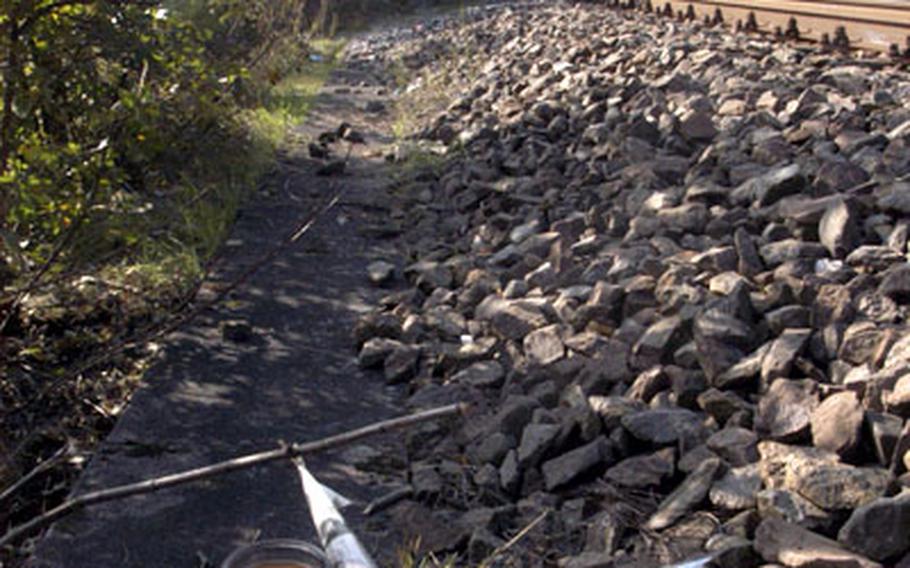 Flowers, a small teddy bear and a candle rest near where two V Corps soldiers were fatally struck by a train Saturday. Two bridges over the tracks are less than 300 feet from the site of the tragedy. The brush-choked hill the two women apparently intended to climb is visible on the opposite side of the tracks. (Matt Millham / S&S)

Flowers, a small teddy bear and a candle rest near where two V Corps soldiers were fatally struck by a train Saturday. Two bridges over the tracks are less than 300 feet from the site of the tragedy. The brush-choked hill the two women apparently intended to climb is visible on the opposite side of the tracks. (Matt Millham / S&S) 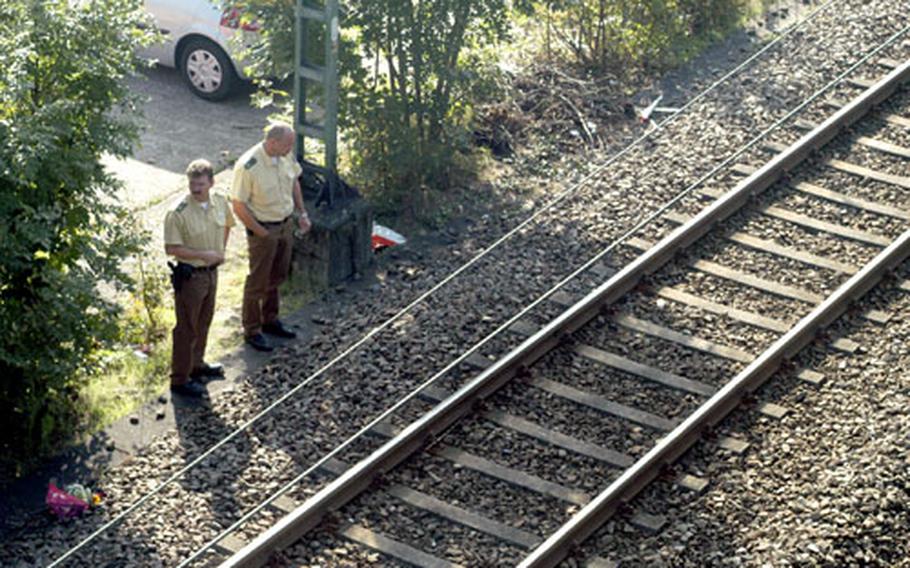 German survey the scene where two American service women were fatally struck by a train Saturday. The train, a regional express, was not scheduled to stop at the station in Neckarhausen and struck the soldiers despite emergency measures taken by the train&#39;s driver to alert them and stop the train. (Matt Millham / S&S)

NECKARHAUSEN, Germany &#8212; Along the tracks where two soldiers were fatally struck by a train Saturday night, reminders of the accident are easily visible.

A woman&#8217;s broken watch, the broken heel from a high-heeled shoe and a piece of the Fiberglas body of the train lie a few feet away from flowers, teddy bears with angel wings and burned-out candles.

Both of the victims, ages 21 and 22, were women assigned to the U.S. Army&#8217;s V Corps, headquartered in Heidelberg, Germany. Identities of the soldiers were not available Monday pending notification of next of kin, said V Corps spokeswoman Hilde Patton.

German authorities speculate that the soldiers were crossing the tracks to get to a nearby parking lot when they were struck by the train at 10:10 p.m.

Both had been at a party, most likely in a private residence close by, said G&#252;nther Grulich, a spokesman for the German police office in Heppenheim. The younger soldier died at the scene, the other on the way to the hospital.

Less than 100 feet from where the two soldiers were hit, a set of stairs leads up to a bridge that crosses over the tracks. Another bridge spans the tracks less than 300 feet in the other direction. On the other side of the tracks where the women tried to cross, the steep, weed-choked hill they apparently hoped to climb looks all but impassable.

A witness told German authorities he saw the two women walk onto the tracks and yelled at them to get away at the same moment the train came. The train&#8217;s driver engaged the emergency brakes and sounded a warning signal, but could not prevent the impact.

A German regional crisis intervention team, including an on- call priest, counseled the driver and a witness after the accident.

As V Corps safety office personnel scoured the area Monday for clues about the accident, another regional express train passed by, startling them.

Holan and two others from his office looked along the tracks, trying to visualize what might have happened to help develop measures to keep it from happening again, he said.

There is easy access to the tracks where the soldiers were struck. A parking lot for the train station is separated from the tracks by less than 10 feet, with no fence between them.

Grulich said it hadn&#8217;t yet been determined why the two women might have been trying to get to the parking lot up the hill.

Results of toxicology tests, which will determine whether the soldiers were under the influence of alcohol or other substances when they were struck, were not complete Monday.