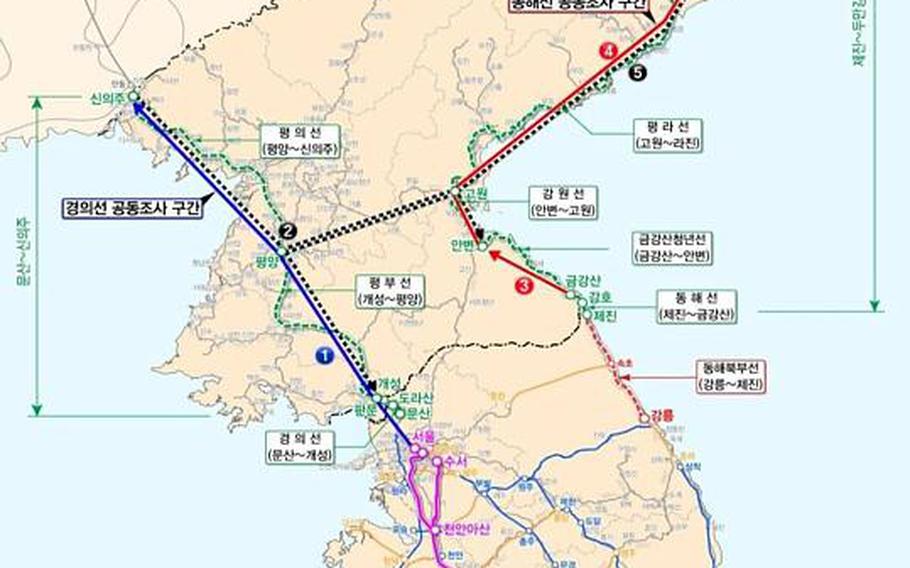 SEOUL, South Korea – Dorasan Station, the last train stop before the heavily fortified border with North Korea, has long been a popular tourist spot, with visitors buying symbolic tickets to walk onto the platform and peer in the direction of the communist state.

On Friday, it will see some real action as South Korea sends a train into the North for the first time in more than a decade.

The two Koreas will begin an 18-day joint field survey of railway sections in the east and the west after the U.N. Security Council granted the necessary exemption to sanctions imposed on the North over its nuclear weapons program.

The inspection is the latest step toward improving relations between the rival nations despite slow progress in U.S.-led nuclear talks. Washington has warned its longtime ally Seoul against moving too fast with the rapprochement without significant progress in persuading the North to give up its banned weapons program.

South Korean President Moon Jae-in and North Korean leader Kim Jong Un agreed to “adopt practical steps toward the connection and modernization of the railways and roads” in the two transportation corridors during their first summit on April 27.

Moon has dangled the project as part of economic incentives for the North to abandon its nuclear program and join the international fold. South Korea also stands to gain as railway connections could provide new land routes to China, opening valuable trade opportunities.

The Security Council’s decision only applied to the survey and future efforts will require new exemptions, according to the foreign ministry.

Following a farewell ceremony, they will roll across the border to Panmun Station in North Korea, the government said in a statement. At that point a North Korean locomotive will replace the South Korean version.

Inspectors will start with a roughly 250-mile section of railway running from the cities of Kaesong to Sinuiju on the western Gyeongui Line from Friday to Wednesday, according to the joint statement released by the Unification Ministry and the Ministry of Land, Infrastructure and Transportation.

Officials will then survey about 500 miles of tracks between Mount Kumgang and the Duman River on the eastern Donghae Line from Dec. 8-17, it said, adding that the number of North Korean rail cars that will participate has not been determined.

The journey, which will carry officials a total of about 1,615 miles, will end in Kaesong, where a South Korean locomotive will reattach and lead the rail cars back to Seoul Station.

“We’re planning to check North Korea’s railway facilities and system and so on,” the ministries said. “We’ll push ahead with working level discussions, including sharing the outcome of the inspection with North Korean members of the joint survey group.”

Officials stressed that any construction would depend on “progress in North Korea’s denuclearization,” but held out hope that a groundbreaking ceremony could be held by the end of the year.