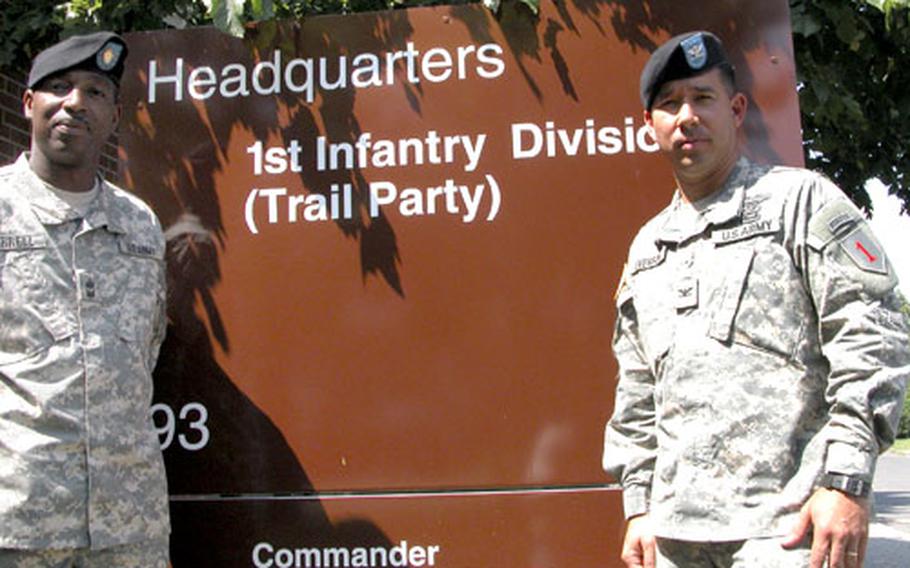 Sgt. Maj. Michael Burrell, left, and Col. Benjamin Everson, are among the few remaining members of the 1st Infantry Division at Leighton Barracks in Würzburg, Germany. With most of the division relocating to the States, Burrell and Everson head up a 1st ID trail party that will stay at Leighton until December. They&#39;ve even been given a permanent-looking temporary sign. (Geoff Ziezulewicz / S&S)

W&#252;RZBURG, Germany &#8212; Most of the soldiers are gone. So are their vehicles, household goods and families. But the 1st Infantry Division isn&#8217;t quite done yet here at Leighton Barracks.

A big red &#8220;1&#8221; still hangs on the wall outside the main gate, as do other remnants of the division headquarters&#8217; 10-year residence here, even after that same headquarters officially said goodbye last week and headed to Fort Riley, Kan. To wrap things up, a division trail party is in place to help the approximately 230 remaining soldiers with things such as processing to their next assignment or retiring. The trail party also will be moving computer equipment and preparing buildings for new tenants, said Col. Benjamin Everson, the trail party&#8217;s commander.

Among other duties, turning over those facilities will involve taking down that big red number &#8220;1&#8221; outside the front gate, and any other aesthetics that marked buildings as belonging to the division. The trail party is expected to be all done by December.

&#8220;The mission is to make sure the 1st ID gets closed out properly,&#8221; Everson said, adding that the trail party was put in place earlier this year. &#8220;It just takes a while. The stuff on the walls is being packed and will be shipped to the new headquarters.&#8221;

Having a Germany-based division contact point for 1st ID soldiers moving on gives them somewhere to go if they have any questions or needs, Everson said.

Division numbers will continue to erode as troops filter off in the coming months, and will be in the 20s by December, Sgt. Maj. Michael Burrell said.

About 230 division personnel remained this week, and by the end of the month, it should be down to about 87, he said.

Many facilities are being handed over this week to the 69th Air Defense Artillery Brigade, which is setting up shop at Leighton along with other units as nearby Giebelstadt Army Airfield and facilities in Kitzingen close.