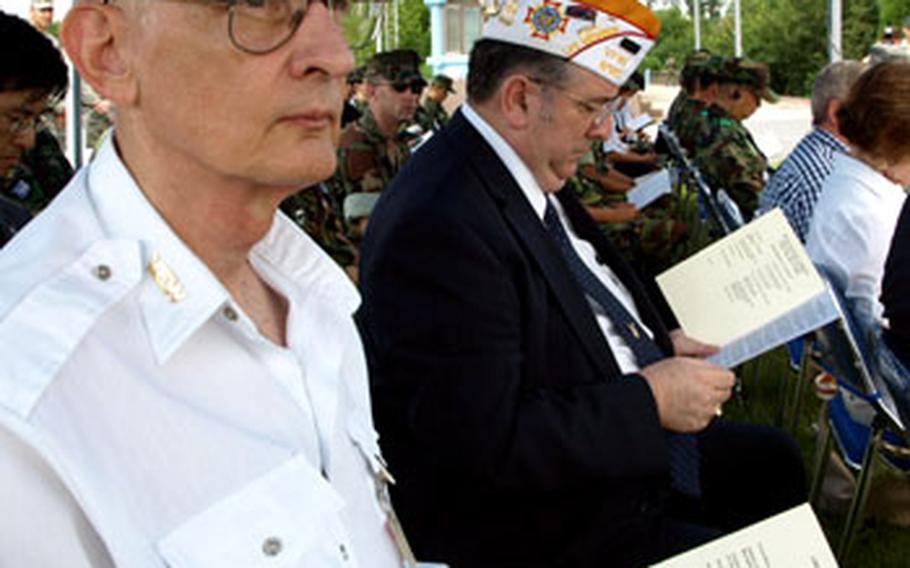 Members of VFW Post 8180, the Bonifas-Barrett Memorial Post from Seoul, watch the memorial to Capt. Arthur Bonifas and 1st Lt. Mark Barrett at the Demilitarized Zone in Korea on Thursday. The two soldiers were attacked and killed by North Korean soldiers in 1976. (Dave Palmer / U.S. Army)

Members of VFW Post 8180, the Bonifas-Barrett Memorial Post from Seoul, watch the memorial to Capt. Arthur Bonifas and 1st Lt. Mark Barrett at the Demilitarized Zone in Korea on Thursday. The two soldiers were attacked and killed by North Korean soldiers in 1976. (Dave Palmer / U.S. Army) William McKinney, a retired colonel and contractor at Yongsan Garrison, stands Thursday at the site where Capt. Arthur Bonifas and 1st Lt. Mark Barrett were killed by North Korean soldiers in 1976. McKinney graduated from the U.S. Military Academy with Bonifas in 1966. (Erik Slavin / S&S)

DEMILITARIZED ZONE, Korea &#8212; Much like today&#8217;s incoming officers, members of the U.S. Military Academy class of 1966 knew what they were getting into when they left West Point.

Arthur Bonifas and William McKinney each deployed to different units in Vietnam. They made it back, but 40 or so of their classmates did not, McKinney said Thursday.

The tragedies took their toll, but after a while they were no longer shocking.

On Thursday, McKinney, a retired colonel who now works as a contractor in the joint operations office at Yongsan Garrison, and others gathered to remember the two soldiers at the site of the attack.

"[Bonifas] was well known for his smile," McKinney said. "His smile was an outward showing of his whole friendly demeanor. He wasn&#8217;t a person who made enemies."

At about 11 a.m. on the day of the attack, an U.N. Commission work team and a 10-man security detail set out to trim a poplar tree that blocked the view between two checkpoints.

They were met by 30 North Korean soldiers, who attacked the soldiers for four minutes. Cameras captured parts of the attack.

Three days later, the United States and South Korea launched a mission to cut down the tree.

A combat platoon and South Korean special forces were on the ground; an aircraft carrier sat of the coast; and heavy air support flew above as the tree was chopped down.

Jung Byung-ho, who attended the ceremony Thursday, was a corporal at Checkpoint 3 when the North Koreans attacked.

They struck Jung near the backbone with an ax but he managed to carry Bonifas to an ambulance.

"It all happened very fast," Jung said through a translator. "Personally, I think the attack was planned ... but the only thing that popped in my head at the time was to get the injured soldiers off the site."

For his actions, Jung has a special place among the "Old Boys," a group of former soldiers at the Joint Security Area, some of whom come to the memorial regularly.

Current U.N. Commission Security Battalion commander Lt. Col. John Rhodes doesn&#8217;t have a personal connection to Bonifas or Barrett beyond their shared duty, but he does know what it&#8217;s like to lose a comrade in battle.