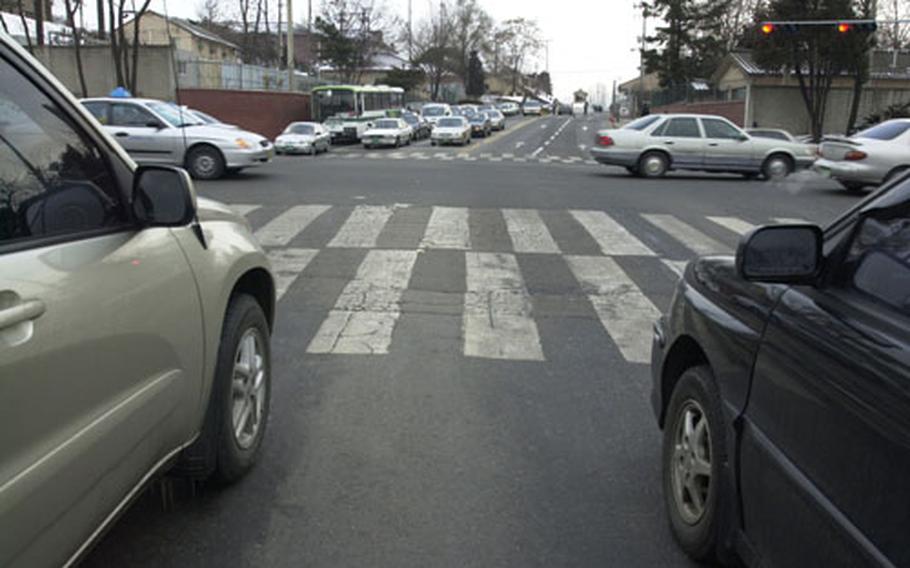 Cars wait to cross the busy intersection where a bridge is scheduled to be built to ease movement between Yongsan&#39;s main and south posts. (Greg L. Davis / S&S)

Gate No. 10, nearest the Dragon Hill Lodge, will close Tuesday so construction can begin on a $7.3 million overpass that will let traffic flow between posts without crossing a congested off-post road.

The project was to begin last summer but was delayed while U.S. officials waited for permission from Seoul city officials to build over the street between the posts, said Maj. David Diehl, project manager for the Far East District Corps of Engineers.

The South Korean government is funding the project.

The overpass is designed to ease traffic between posts; 80 percent of the traffic through the gates is to cross from one post to another, not exit, officials said.

Traffic snarls result when force protection concerns lead gate guards to check every identification card, even as drivers travel from post to post. Cars queue after work daily, from Gate No. 5 up 8th Army Boulevard toward Camp Coiner. Traffic also jams near the PX and mini-mall as cars attempt to merge onto 8th Army Boulevard heading toward Gate No. 5.

To help ease the congestion, gates that have been closed since the Sept. 11, 2001, terror attacks will be reopened as the overpass is being built.

Diehl said the gate will be closed for about nine months and then Gate No. 5, the main entrance/exit into main post, will close for nine months while the project is completed.

Gate No. 10 will have inbound and outbound traffic lanes, Diehl said.

When completed, the overpass will let drivers travel from post to post without having to show an ID card, Diehl said.

Gate No. 7, the first gate on the main post as a driver approaches from Itaewon, will undergo a $675,000 widening to accommodate more traffic.

Dan Brickey, a civilian who has worked in South Korea for six years, said he is concerned the heavy traffic at other gates during the construction will pose a security risk as people wait to get on post. But Brickey said the project, when completed, will free gate guards to provide better protection on post.