Traffic to slow for work on CPX Gate 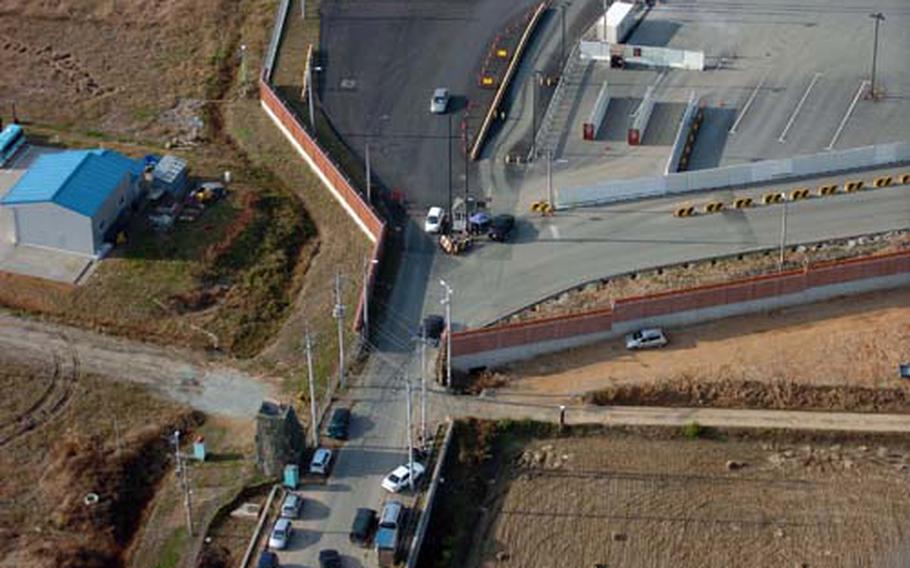 At Camp Humphreys in South Korea, a November 2007 aerial photo shows the CPX Gate, center of photo, and the CPX road that runs through it. (The road to the right is a separate thoroughfare for commercial vehicles). Workers this week begin replacement of automated pop-up security barriers, a project that will alter traffic flow on CPX Road for about a month. (Andre Butler/Courtesy of the U.S. Army)

PYEONGTAEK, South Korea &#8212; Traffic on a section of Camp Humphreys&#8217; CPX Road will be cut to one lane starting Wednesday as workers replace security barriers at the CPX Gate, officials said Monday.

The project is to finish about a month later.

Workers will replace automated pop-up barriers designed to hinder vehicles. The replacement is part of the regularly scheduled upkeep of the post&#8217;s security systems.

During the project, the road will be one-way for outbound and inbound, but priority will go to outbound vehicles, said Bob Aldridge, chief of the access control branch in the U.S. Army Garrison-Humphreys emergency services directorate.

A flag man will control traffic from 7 a.m. to 6 p.m. Monday through Friday.

CPX Road will be closed to inbound traffic starting at 5 p.m. Monday through Friday, and all day on weekends. When CPX Road is closed, all vehicles will be routed through the CPX Commercial Gate, which is about a hundred yards from the CPX Gate.