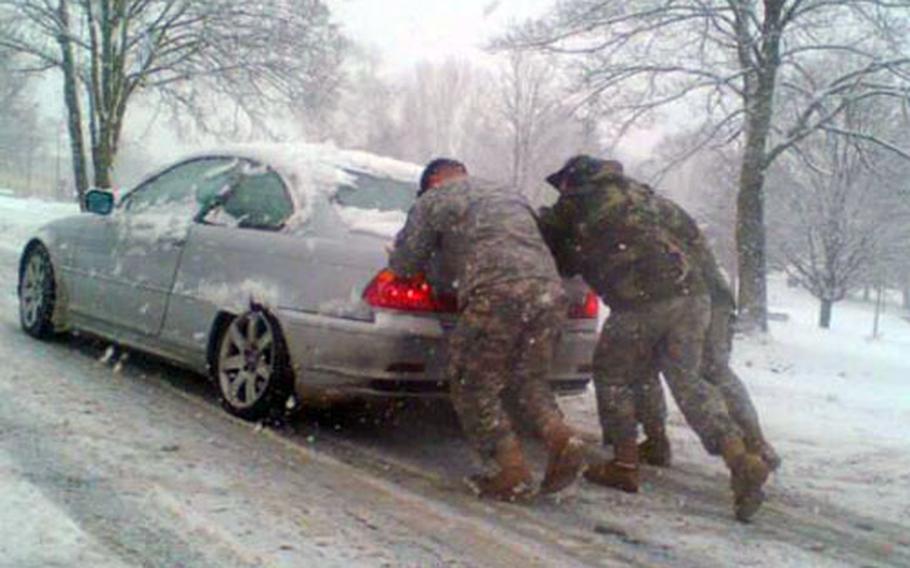 Soldiers from Baumholder, Germany, help a driver through an icy patch Thursday morning at Smith Barracks. While snow fell hard and heavy for most of the morning, it melted away by late afternoon. (Geoff Ziezulewicz / S&S)

Soldiers from Baumholder, Germany, help a driver through an icy patch Thursday morning at Smith Barracks. While snow fell hard and heavy for most of the morning, it melted away by late afternoon. (Geoff Ziezulewicz / S&S) 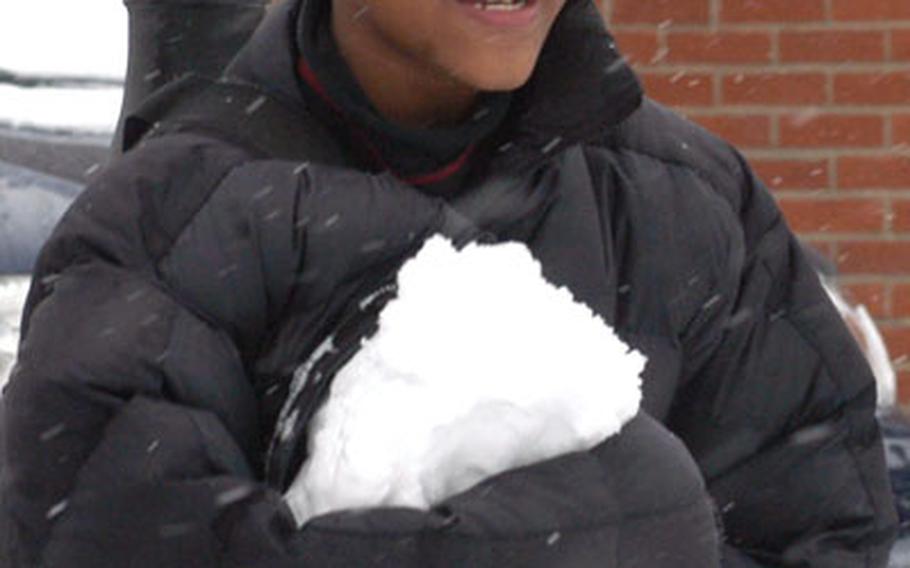 Marco Grimsley, 11, carries a chunk of snow toward his friends who were making a snowman Thursday at RAF Mildenhall, England. (Sean Kimmons / S&S) 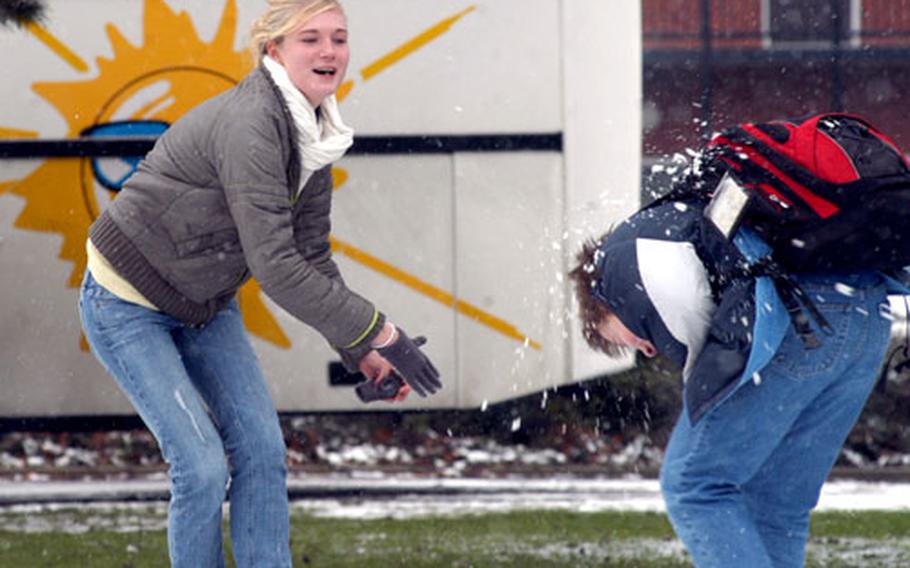 Charli Steele, 17, beans her 12-year-old brother, Elijah, with a snowball on RAF Mildenhall, England, after they were released early from school due to snowy conditions. (Sean Kimmons / S&S) 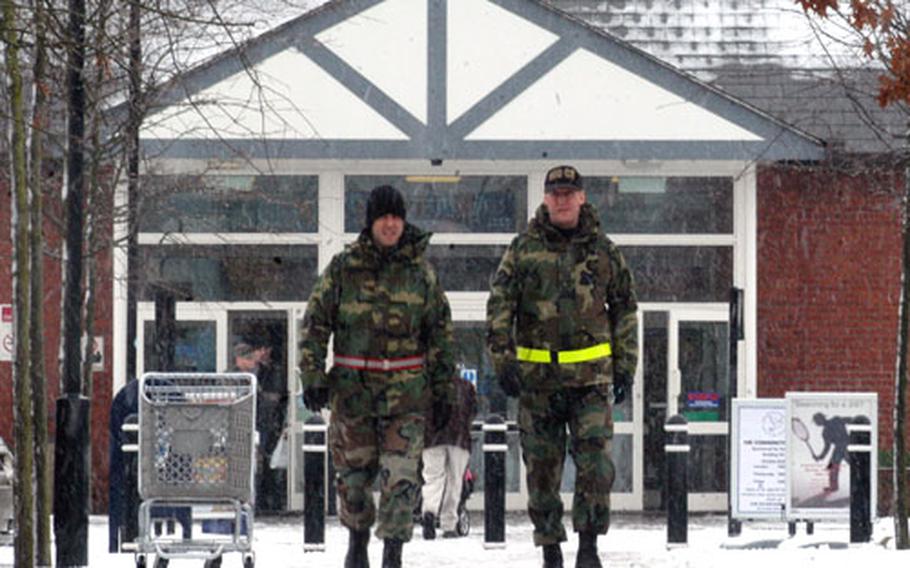 Master Sgts. Jeremy Lane, left, and Jim Bellegrade, both with the 100th Communications Squadron, walk through some snowy weather outside of RAF Mildenhall&#39;s BXtra on Thursday. (Sean Kimmons / S&S)

RAF MILDENHALL, England &#8212; The first significant snowfall of the season snarled road, train and air traffic and prompted officials to close schools across England on Thursday.

Air Force officials said base operations were not greatly affected.

Ice on the runway caused some minor delays at RAF Mildenhall, home to the 100th Air Refueling Wing, but major disruptions were avoided due to heavy snowplowing, said base spokesman Capt. Jamie Humphries.

Throughout the morning, snowplows were busy clearing the runways while dump trucks were crisscrossing installation roads, spreading salt to prevent freezing. Motorists were urged to exercise extreme caution driving on roads that had frozen overnight and then were covered in snow.

Local police said no major accidents had been reported in the area around the air bases.

&#8220;Everyone has been very good by the looks of things and we haven&#8217;t had too much to deal with,&#8221; said Suffolk Constabulary spokeswoman Lisa Crane.

Elsewhere in the country, however, snow caused major transportation delays. In London, travel on some subway lines was suspended during rush hour and some stations were closed due to ice on the platforms, according to the BBC.

Flights were either delayed or canceled at all three of England&#8217;s major airports as well as at smaller airports across the country, the BBC reported. Motorists also were stuck in gridlock in London due to icy conditions.

Alconbury schools and London Central High School were closed all day, and Lakenheath schools allowed children to head home at 11:30 a.m. before the roads became too dangerous.

The BBC reported Thursday morning that more than 200 schools were closed across the east half of England, where most of the U.S. Air Force facilities are located.

An RAF Mildenhall weather forecaster said a slow moving arctic low pressure system passed over southern England, mixing with pre-existing cold air to create the wintry weather. The system was expected to move out of England by Thursday afternoon, but freezing temperatures will lead to icy road conditions Friday morning.

Snow also fell in parts of Germany. At Baumholder, about 2 inches fell in the morning, with rain predicted for later in the day, said 1st Lt. Stephanie Hedstrom of the 21st Operational Weather Squadron in Sembach, Germany.

Europe is finally seeing a weather pattern typical of the transition period between fall and winter, Hedstrom said in an e-mail. Such weather systems will continue to move through Central Europe in the next five days, producing rain, snow and mixes of both.