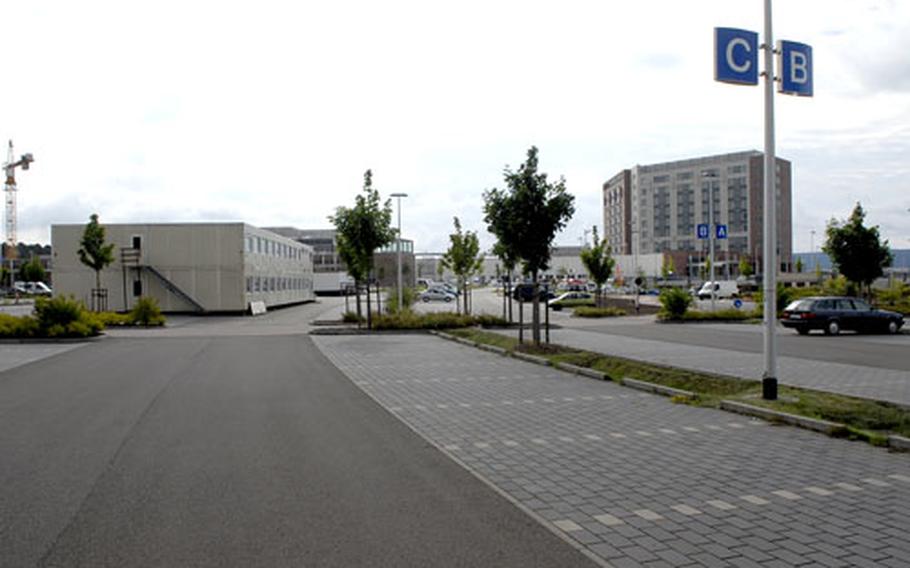 The Kaiserslautern Military Community Center at Ramstein Air Base, Germany, will have 2,200 parking spaces — about 770 more than the Ramstein and Vogelweh military base exchanges combined — but base officials say they don&#39;t know whether that will be enough for peak shopping times. (Jennifer H. Svan / S&S)

The Kaiserslautern Military Community Center at Ramstein Air Base, Germany, will have 2,200 parking spaces — about 770 more than the Ramstein and Vogelweh military base exchanges combined — but base officials say they don&#39;t know whether that will be enough for peak shopping times. (Jennifer H. Svan / S&S) 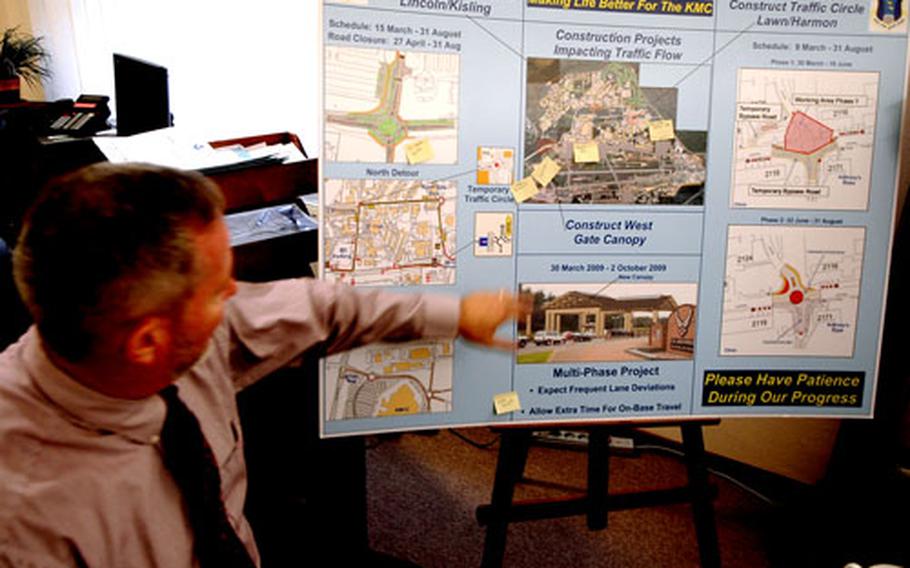 RAMSTEIN AIR BASE, Germany &#8212; Two questions that won&#8217;t be answered until after the Kaiserslautern Military Community Center fully opens are whether the base will be able to handle the influx of mall traffic, and whether those shoppers will be able to find a parking spot.

Here&#8217;s what base planners do know: The 844,000-square-foot mall-hotel complex will significantly boost traffic on Ramstein, and parking is expected to be a challenge during peak shopping times.

The KMCC should be completely open by Sept. 15, when the Army and Air Force Exchange Service is scheduled to open its doors. Billed as the largest military exchange in the world, the store will absorb the Ramstein and Vogelweh base exchanges, as well as the Vogelweh BXtra and furniture store.

A traffic study done in 2006 forecast an increase of 16,000 daily automobile trips onto base by 2010, a 73 percent rise tied in a part to the opening of the KMCC, according to James Fitzpatrick, the 86th Civil Engineering Group deputy commander. In June, an average of 22,000 cars entered Ramstein each day, he said.

But Fitzpatrick said the study also noted that traffic to the KMCC is expected to peak late morning and early afternoon and not during the base&#8217;s "rush hours," typically from 5:30 a.m. to 10 a.m., and 3:30 to 6 p.m. on weekdays.

The base will continue to track traffic patterns, with another study planned after the KMCC fully opens, one that is funded through January so the holiday shopping season is included, Fitzpatrick said.

Once complete, the complex will have 2,200 parking spaces, including 182 designated for employees, and 350 in a yet to be opened parking garage by the hotel. That total exceeds current parking at the Vogelweh and Ramstein base exchanges by 772 spots, Fitzpatrick said.

"There is more parking," he said during an interview at his office Friday. "Am I confident there&#8217;s enough? No. It is going to be a challenge," especially during holidays.

"But during the holiday seasons, you go to any mall in the States, it&#8217;s a challenge to find a parking space," he said.

Space and budgetary constraints limit the potential for expanding parking directly around the KMCC, Fitzpatrick said.

"The challenge with the KMCC, this is almost sacred ground," he said, noting the only continuous forest left on Ramstein buffers the mall on one side. "So we can&#8217;t touch it," he said.

Forest was clear cut to make way for the KMCC and asphalt parking space surrounding the facility, and it would be difficult to get permission to expand any further into the trees, Fitzpatrick said.

But if parking becomes an issue, there are some alternatives that could be considered, Fitzpatrick said. They include adding more time-restricted parking spots and running a KMCC shuttle from another location on base. But, he added, "Honestly, I think that&#8217;s up to services and (Army and Air Force Exchange Service) to decide" if there&#8217;s a need.

Already, parking and traffic around the KMCC is a worry among Americans in the local area.

Army Sgt. 1st Class Trey Thompson, a medical liaison officer with Landstuhl Regional Medical Center, said he looks forward to being able to shop for just about everything in one location. But he worries that convenience may come at a price.

"I don&#8217;t know how they&#8217;re going to handle all those people," he said, while escorting wounded servicemembers on a recent shopping trip to the Vogelweh BX. "I think for the first few years, it&#8217;s probably going to be a madhouse."

Charles Lawrence, a retired Air Force master sergeant from Saulheim, Germany, used to work at Ramstein and lived in the Kaiserslautern area for 10 years.

"Parking was atrocious (on base) and it ain&#8217;t going to get any better," he said, while visiting with friends outside the Vogelweh BX last week. Consolidating all major shopping venues into one location "makes no sense whatsoever," he said.

Fitzpatrick said most people don&#8217;t realize there&#8217;s also a huge parking lot on the west side of the KMCC that extends out to Burger King.

But the lot won&#8217;t be cleared out in time for the Sept. 15 opening. A spokeswoman with Landesbetrieb Liegenschafts-und Baubetreunng, the German state construction agency overseeing the project, said Friday work on the roof is due to be completed in September or October.

Marcus Kl&#246;ckner contributed to this story.