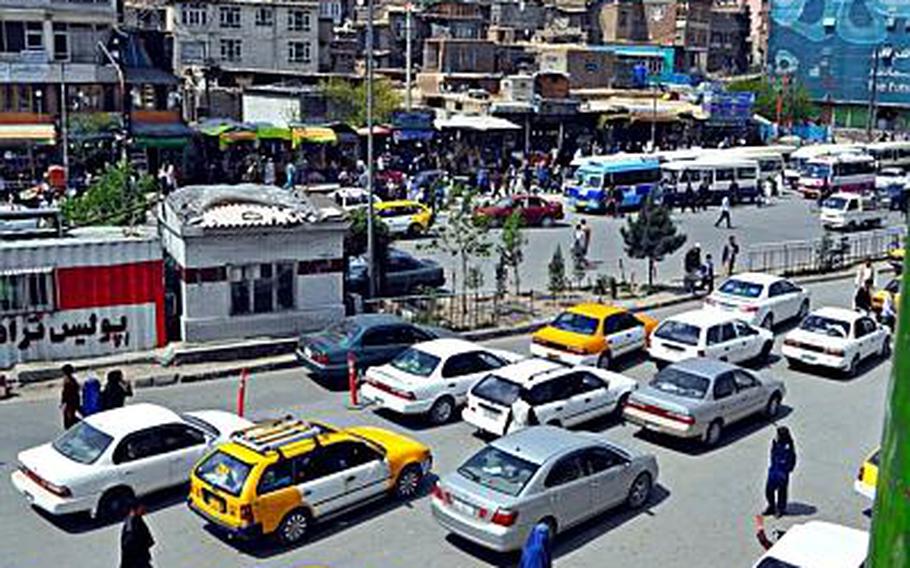 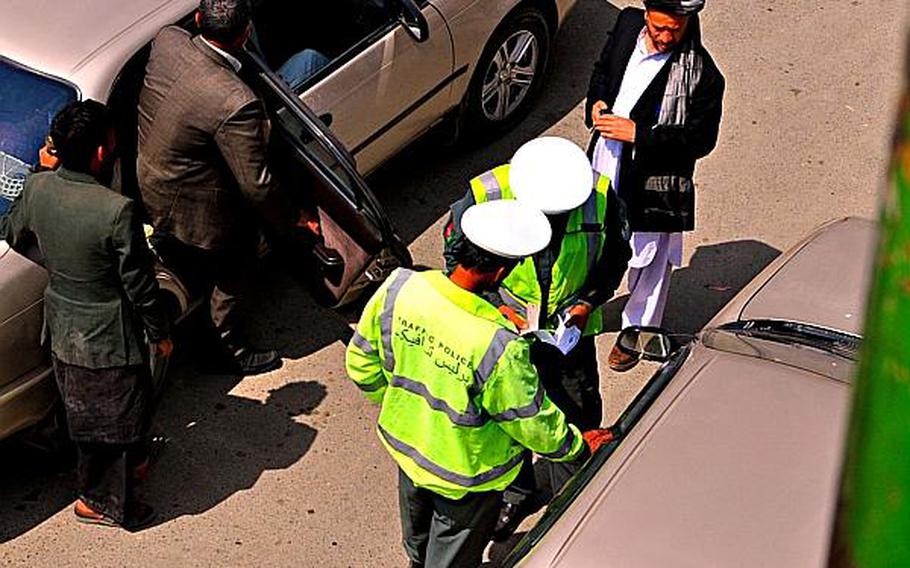 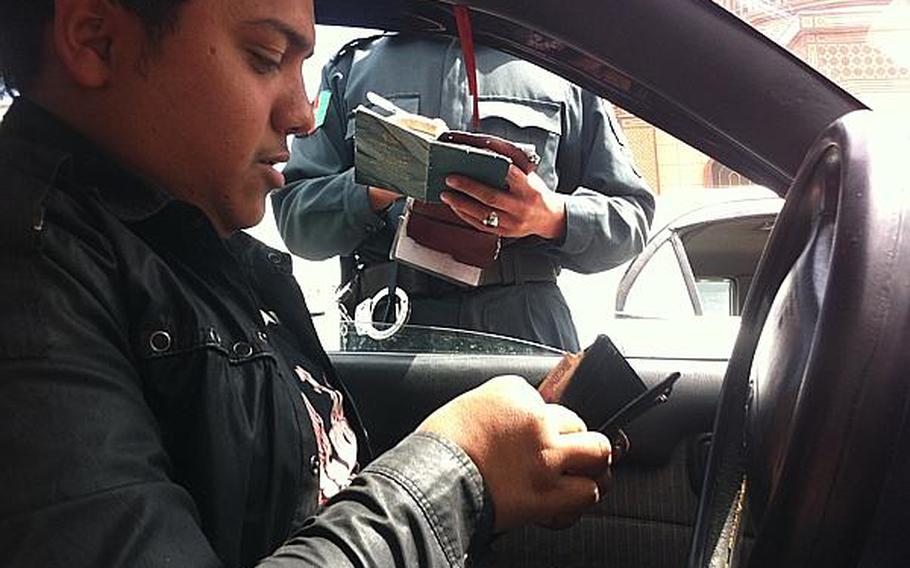 A taxi driver prepares to pay about $5 to a Kabul Traffic Police officer who had questioned the validity of his driver's license. The officer issued no tickets and slipped the money in his pocket. Many drivers complain that the traffic police have taken advantage of a crackdown on traffic infractions, including tinted windows and expired licenses, to extract bribes in exchange for not writing tickets. (Heath Druzin/Stars and Stripes)

Between the cost of the car and enough gas to keep the needle a tick above empty, it can be a meager living driving a cab. But lately, drivers say, their profit margin has been sliced even thinner by those sworn to serve and protect.

The crackdown on traffic violations is official, and sometimes the tickets are legitimate. Three months ago, the traffic department received an order from President Hamid Karzai to step up enforcement in an effort to make the capital’s dangerous roads a little safer.

But cab drivers say it has led to little more than traffic cops pocketing part of their income.

One cab driver, who asked to be called Faisal, said he was stopped three times in one week recently. He said that, unlike most cab drivers, he has his license in order — although instead of taking the mandatory one-month safety class, he simply paid a bribe — but traffic police would find something to fine him for anyway. For example, he says, they have started needling cab drivers for the common practice of having two passengers in the front seat, or for having too many people riding in back.

Instead of accepting an official fine of 300 to 500 Afghanis ($6-$10), Faisal said, he can haggle with the traffic officer and give him about $3, which he said the officer pockets.

He asked to be referred to by a pseudonym to avoid further trouble with authorities.

Col. Al-Haj Asadullah, deputy chief of Kabul’s traffic department, said the additional enforcement is not aimed specifically at cab drivers, but that cracking down on bad drivers will save lives. He said traffic department revenue from ticketing has increased.

Asadullah categorically denies that corrupt traffic police are a problem. He accused taxi drivers of ginning up complaints because traffic police prevent them from stopping wherever they’d like to pick up and drop off passengers.

“One is the reality, and one is the gossip,” he said. “The reality is that, if a taxi driver can prove to me that the [officer] on the road took a bribe from them, I am committed to fire him.”

He rattled off two local law enforcement numbers he said every Afghan should know, and challenged them to report incidents of corruption. Then he challenged two reporters to find a traffic officer who would accept a bribe from their taxi driver.

A few days later, a Stars and Stripes reporter’s taxi was waylaid by a police officer, who questioned whether the driver’s license was real. The driver handed over the equivalent of about $5, which the officer slipped into his pocket.

Traffic citations normally require the driver to go to court in order to pay the fine.

Corruption has long been a core complaint against the Afghan government, ranging from the highest levels to low-level bureaucrats. Martine van Bijlert, co-director of the Afghanistan Analysts Network, a nonprofit policy research organization, said the traffic crackdown exemplifies the Catch-22 situation that arises when a government with weak control over its officials tries to extend the rule of law; it often becomes just another opportunity for low-level bureaucrats to collect bribes.

She said some drivers’ complaints could be exaggerated, either because they’re angry about being ticketed or because they’re not used to some traffic regulations being enforced, but corruption is almost certainly a part of the picture.

“It would be nonsense to dismiss the reports of the taxi drivers and say there’s no corruption happening,” she said.

Lal Mohammed, another cab driver, said he once tried to report corruption when he was driving a cab in Jalalabad, but learned his lesson when a court security guard threatened to beat him up. While he’s never tried the emergency phone numbers, he claims other cab drivers who have attempted to report police say the lines often go unanswered.

“I am a poor person,” he said, shaking a raised finger at the windshield. “I just shout that they are corrupt and they are thieves.”