Tradition recalls Mass before Battle of the Bulge On Christmas Eve 1944, a Mass was celebrated for 300 U.S. Army troops about to leave Maastricht, Netherlands, for the Battle of the Bulge. After the Christmas Eve Mass, each of the men wrote his name in charcoal on a cave wall. Now, local residents and Americans gather to celebrate a Mass in their honor. (Kevin Dougherty / S&S)

On Christmas Eve 1944, a Mass was celebrated for 300 U.S. Army troops about to leave Maastricht, Netherlands, for the Battle of the Bulge. After the Christmas Eve Mass, each of the men wrote his name in charcoal on a cave wall. Now, local residents and Americans gather to celebrate a Mass in their honor. (Kevin Dougherty / S&S) 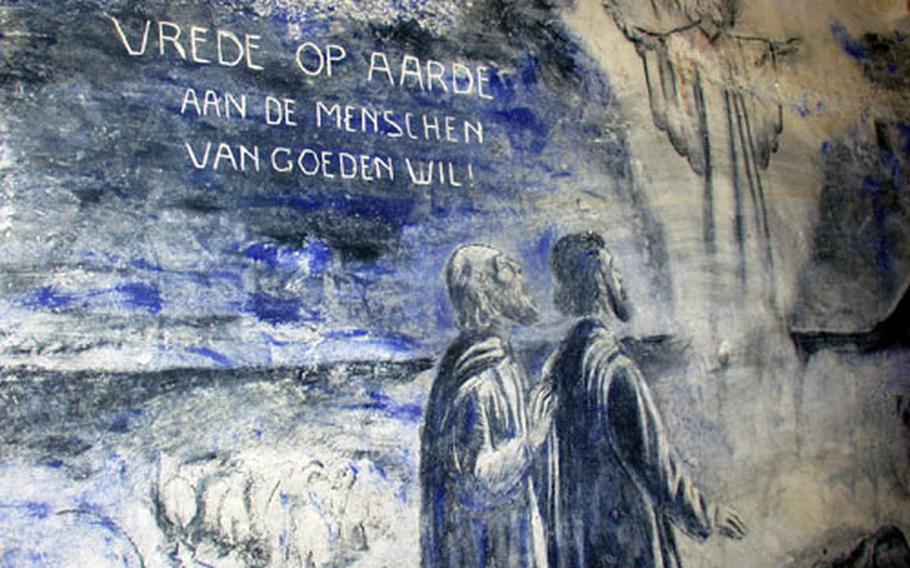 On the cave&#39;s walls, art and a message of hope for peace on earth. (Kevin Dougherty / S&S) 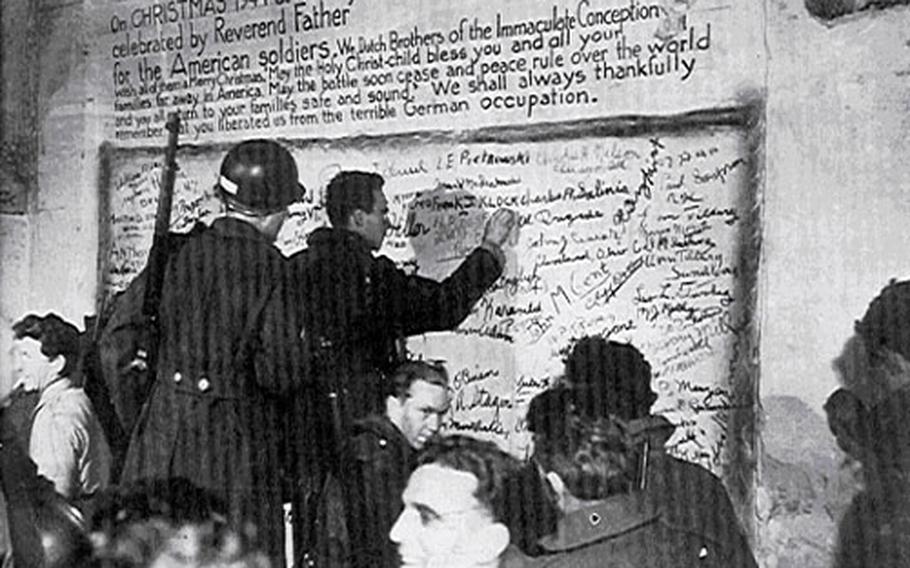 MAASTRICHT, Netherlands &#8212; Written in charcoal, the names on the wall grip a visitor the same way the vise of war led 300 U.S. Army soldiers to squeeze into a cave on a cold winter night six decades ago.

Charmed by the Christ child and all too anxious to pray for peace, they gathered in a cave behind a monastery for a candlelight Mass on Christmas Eve. They met in the cave because it was safe from shelling, and the sounds of war couldn&#8217;t be heard.

When the service ended, they grabbed a piece of black charcoal and scrawled their names on the white rock wall.

Many were kids, about to return to the front and not sure what was waiting for them around the bend.

In that dimly lit cave in southern Netherlands, with war on the horizon, they sought the light of Christmas, and all its promise.

Years later, others follow their footsteps into the cave on Christmas Eve, creating a growing and enduring tradition that is as heartfelt as it is humbling.

The tradition dates to at least 1980, and this year will be no different. On Friday, there will be a 7:30 p.m. candlelight Mass celebrated by van der Krabben and U.S. Army Lt. Col. Scott Borderud, a Protestant chaplain for the 254th Base Support Battalion in nearby Schinnen.

Borderud called it an honor to celebrate the Mass for a second time and said the service illuminates &#8220;the strength and the depth of the Dutch memory of how America liberated them in 1944-45.&#8221;

On Christmas Eve 1944, the men who assembled in the cave knew they would soon leave Maastricht &#8212; a rest and recuperation stop as well as a logistics hub &#8212; to fight in what would become known as the Battle of the Bulge. Adolf Hitler&#8217;s massive counteroffensive in the Ardennes necessitated a response, and most of the 950 soldiers in the city soon returned to the front.

The troops were joined in the cave by a contingent of 42 monks. Twelve were part of the service and 30 sang as a choir. In an interview recorded before his death, a Dutch monk by the name of van Grinsven recalled that night.

&#8220;We drove up that silent road upon the hill that led to the cave,&#8221; said van Grinsven, a member of the choir. &#8220;The soldiers were already present. They looked a little bit strange to me. Not the way I imagined them to be. I was surprised that these rough men could be so pious.

For far too many, it was.

Of the 300 soldiers who attended the service, only 50 were alive when the war ended 4&#189; months later. Even the Catholic priest from New York who celebrated the Mass died in combat.

&#8220;The people here are still very thankful of the Americans,&#8221; said Nito-Alphonse Br&#252;ll, chairman of a local nonprofit Dutch foundation that runs the event.

Of primary concern to the foundation is the preservation of the wall with the soldiers&#8217; names. The wall, near the altar, now has a protective shield in front of it.

The donation of 5 euros per ticket for the service is &#8220;purely for the preservation of the monument, the signatures,&#8221; said Rita Hoefnagels, one of the Dutch organizers. The wall &#8220;is where it all started.&#8221;

The chances of getting into Friday&#8217;s service are nil. That&#8217;s because what began as a Dutch display of gratitude has developed into a major holiday event, one that can only accommodate 300 people because of the size of the cave and the symbolism of that number.

Tickets are available annually starting in November, said Hoefnagels, who is also a 24th BSB spokeswoman. The public affairs office distributes the BSB&#8217;s allotment on a first-come basis. The community gets roughly half of the tickets with the rest going to the foundation.

The foundation is also raising donations to renovate the site, one that grows more precious each Christmas season.