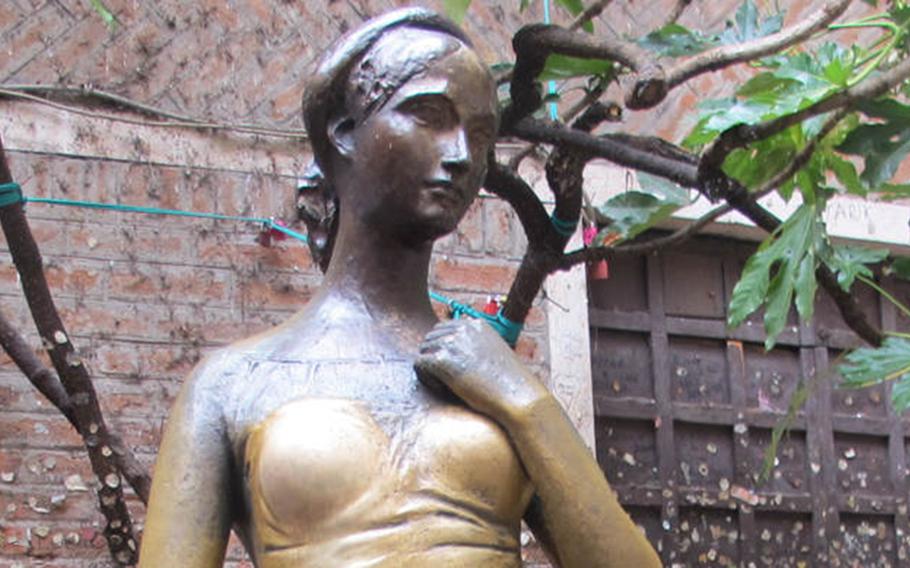 Buy Photo
A bronze statue of Shakespeare's Juliet in the courtyard of the Cappelletti house in Verona, Italy, stands alone in a rare unmolested moment. (Nancy Montgomery/Stars and Stripes)

Buy Photo
A bronze statue of Shakespeare's Juliet in the courtyard of the Cappelletti house in Verona, Italy, stands alone in a rare unmolested moment. (Nancy Montgomery/Stars and Stripes) 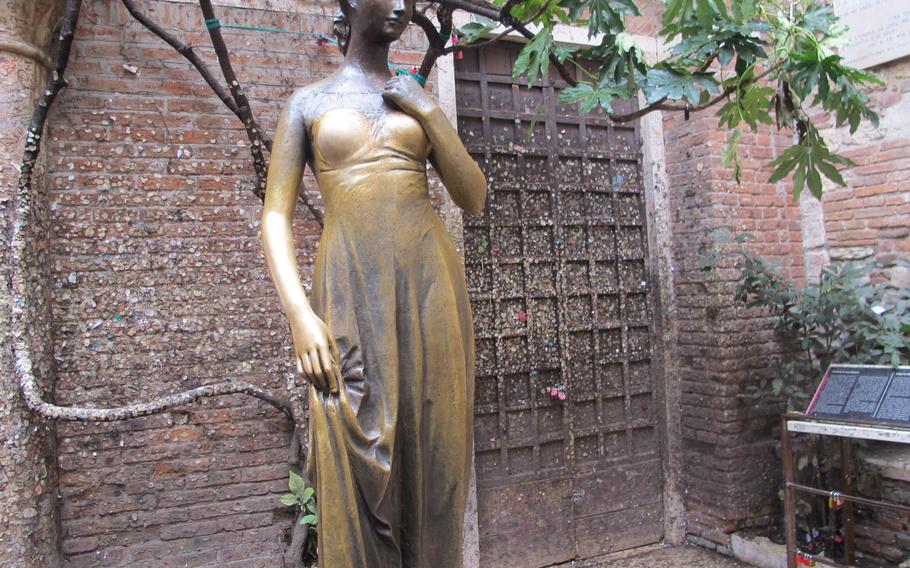 Buy Photo
The bronze statue of Shakespeare's Juliet is in the courtyard of the Cappelletti house in Verona, Italy. (Nancy Montgomery/Stars and Stripes) 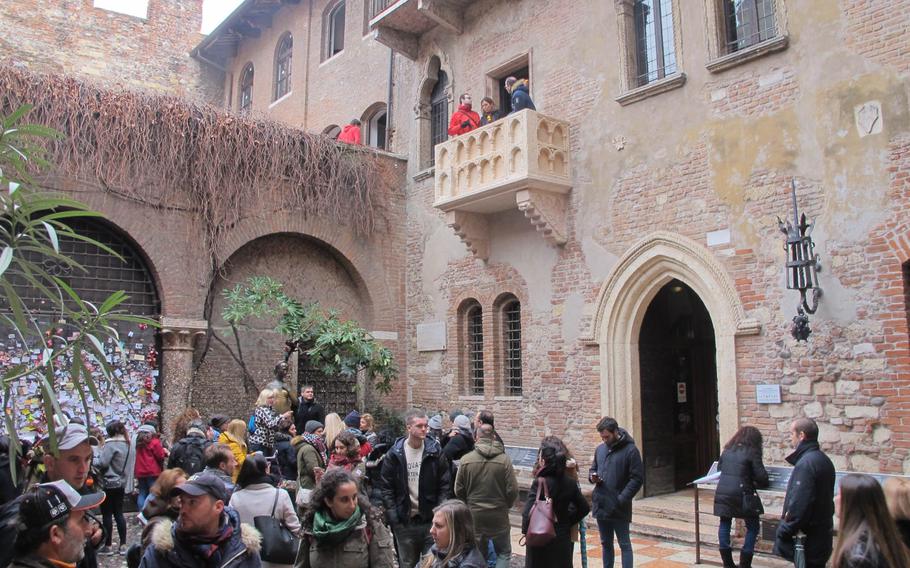 Buy Photo
A crowd in the courtyard of Juliet's house, complete with balcony added for ambience in Verona, Italy, where Shakespeare set "Romeo and Juliet." Visitors cluster around Juliet's statue for photos. The house, one of the city's top tourist attractions, is less than an hour's drive from Vicenza. (Nancy Montgomery/Stars and Stripes) 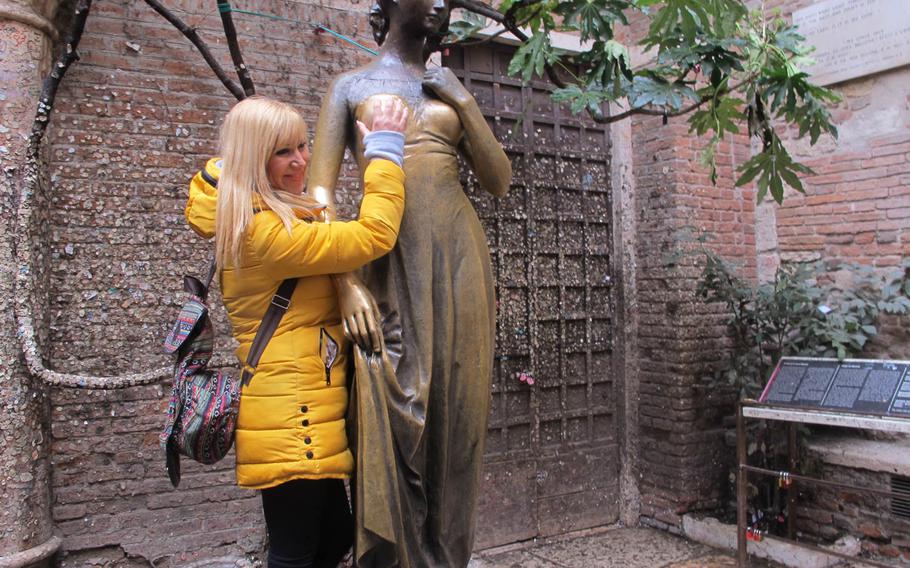 Buy Photo
Many tourists touch the statue's breast, an action said to bring good luck. But it did the opposite for a Boston gynecological surgeon when he showed a photo of him doing so at a conference. (Nancy Montgomery/Stars and Stripes) 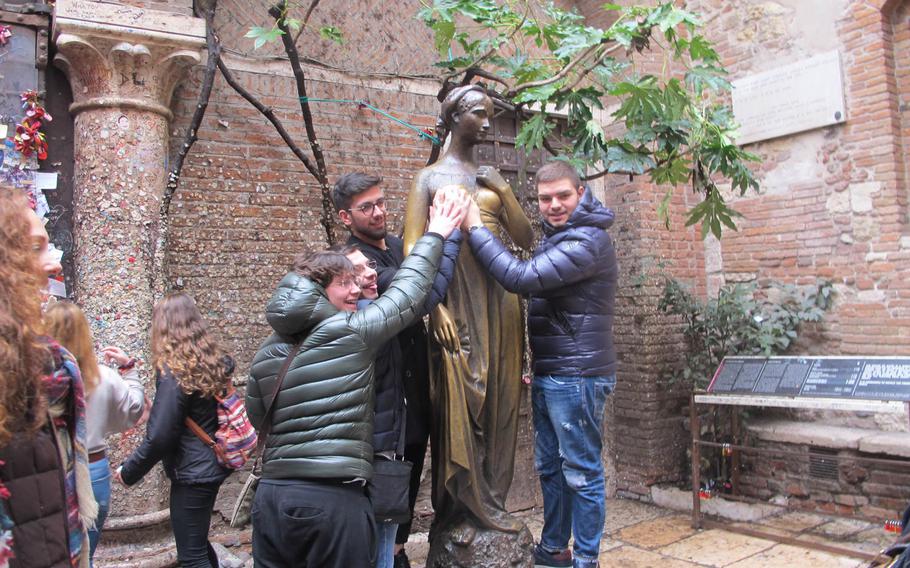 Buy Photo
Some say the tradition of touching the statue of Juliet should be discontinued because it is disrespectful to the 13-year-old tragic heroine and to women in general. (Nancy Montgomery/Stars and Stripes) 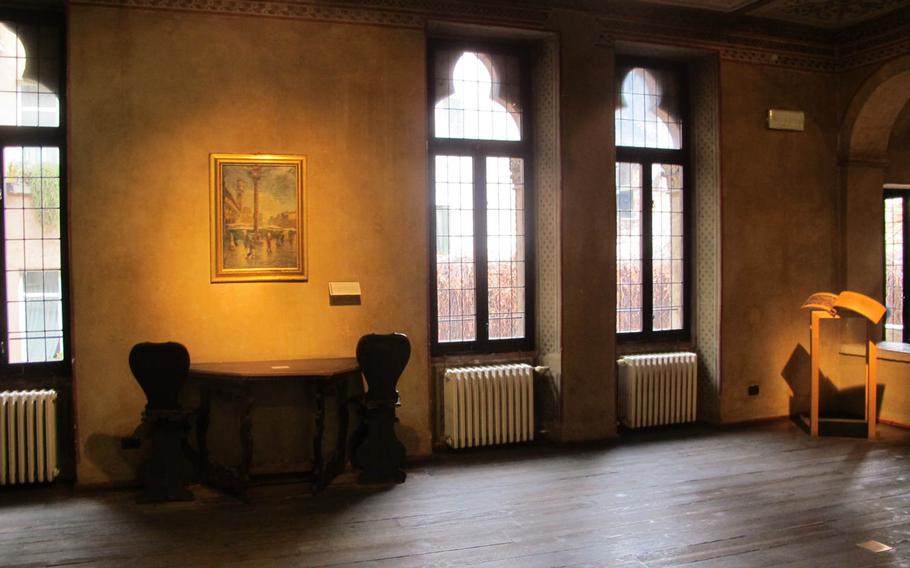 Buy Photo
The interior of Juliet's Gothic-style house in Verona, Italy, is sparsely decorated with furnishings representative of the 14th-century Italian haute bourgeoisie. Shakespeare's play was preceded by an Italian tale of doomed young lovers from wealthy, blood-feuding families. (Nancy Montgomery/Stars and Stripes) 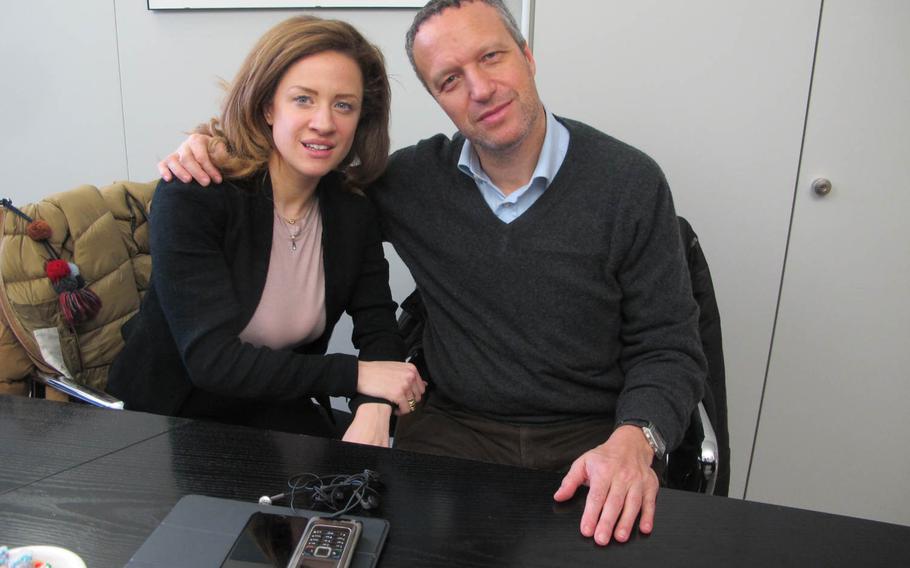 Buy Photo
Michela Morallato, a Vicenza woman, left, teamed with former Verona mayor Flavio Tosi with plans to discourage the traditional groping of the Juliet statue by adding a statue of Romeo. The project is stalled. (Nancy Montgomery/Stars and Stripes)

VERONA, Italy — Among this city’s attractions is a 14th century building billed as the home of Shakespeare’s Juliet, the star-crossed teenager who became Romeo’s bride.

Although there are substantial doubts that it was in fact the home of Shakespeare’s tragic heroine, it is a magnet for lovers, the lovelorn and tourists. Among them every year are U.S. troops and families assigned to U.S. Army Africa and the 173rd Airborne Brigade, both based in Vicenza, just a 45 minute-drive away.

The Gothic style house once owned by the Cappelletti family in the old town, just a few minutes’ walk from the arena, was bought by the city in 1905. It now brings in about a million euros annually, city officials said, or about $1.2 million.

But one of its traditions may be unsuited to changes in modern society’s gender politics, as a prominent American surgeon recently learned.

A bronze statue of Juliet stands in the courtyard. Touching her right breast, according to lore of unknown origin, is said to bring luck.

During a trip to Verona, Boston doctor Jon Einarsson, president of a medical board of gynecological surgeons who practice minimally invasive surgery, was among the legion of statue touchers, who nowadays line up for their turn to grab and grin for the camera. He showed a slide of it at a medical conference late last year.

In response, more than 100 surgeons petitioned the medical group’s governing board to say that female surgeons had been sexually harassed and assaulted, intimidated and objectified by male colleagues. Einarsson’s display of the photo was unprofessional and disrespectful, they said, particularly by a gynecological surgeon, and was emblematic of the problem.

Surgeons of both sexes insisted that Einarsson, who initially defended his photo as something all Verona tourists do, apologize, according to a story in The Boston Globe last month.

They also demanded that the organization institute new policies and procedures to investigate and respond to sexual harassment, and to put more women into leadership.

“I am 48, and I remember when I was young people touching the breast,” said Flavio Tosi, a two-term Verona mayor who said in an interview that until recently he never gave the statue emplaced in 1972 a second thought.

Tosi said that he found the response “a little strange” and “cute.”

“Impossible for that to happen in Italy,” he said.

Unlike the United States, the United Kingdom and France, Italy has not had a “#MeToo” movement, the shift in sexual politics begun last year after a veritable army of famous actresses accused film producer Harvey Weinstein of sexual predation.

But Michela Morellato, an Army wife who lives in Vicenza, said she was offended by the Juliet tradition during a visit to the house with her young daughter and some American friends. Her daughter asked why people were touching the statue’s breasts, Morellato said, and she didn’t have a good answer.

“I see an innocent girl,” she said, noting that Juliet is 13 years old in the play. “I want to say that this is wrong.”

She noted that the statue was put up and the tradition begun around the same time as a feminist movement in Italy started pushing through laws to legalize abortion and divorce.

It suffered so much handling that it cracked at the breast and broke at the arm four years ago and had to be replaced, Tosi said. The new statue cost the city about $27,000.

“You can’t break a tradition in Italy,” said Tosi, who’s running for prime minister in the coming Italian elections as a center-right candidate.

Morellato suggested to Tosi that they could place a statue of Romeo in the courtyard.

Tosi said he was on board.

“I think it’s a modern idea to put Romeo near her,” he said. “You can’t force people. But maybe fewer people will touch the breast.”

But installing a Romeo statue would require approval by a variety of government offices. The project has stalled since Tosi left office, an example, he said, of one of Italy’s longstanding problems. “Too much bureaucracy,” he said.