Toys give children's clinic a shot in the arm 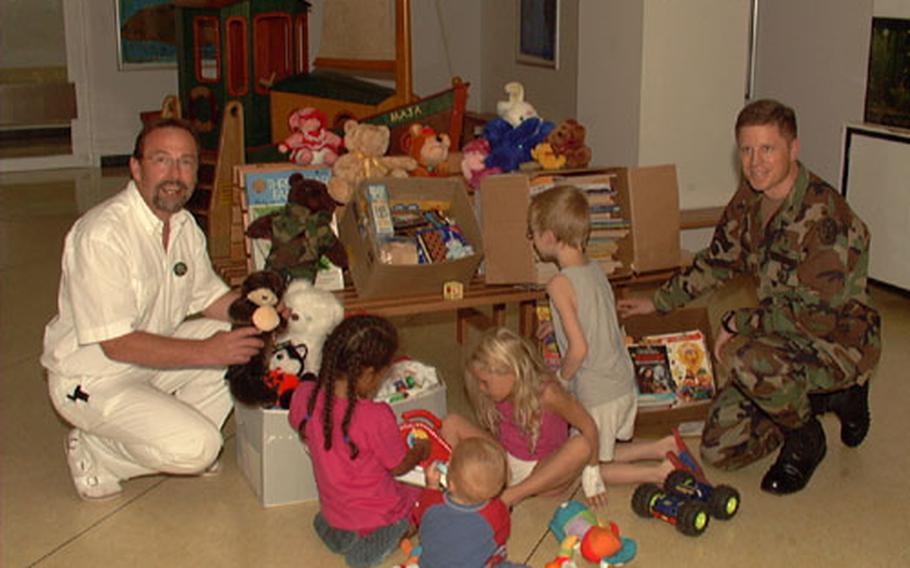 BAMBERG, Germany &#8212; Efforts by staff members at the Bamberg Army health clinic will make stays at the local Bamberg clinic a little brighter for American and German children.

The clinic, known as a klinikum in German, had no toys and only German-language books for the pediatrics ward patients. That did little to ease the dreariness of a hospital visit for the 240 American children who receive care there each year, according to Danielle Sorenson from the Bamberg Army health clinic.

Sorenson, who is the clinic commander&#8217;s secretary, worked with patient liaisons Manfred Mader and Kay Booth to coordinate a toy drive and get approval from the hospital&#8217;s pediatrics chief, Karl Heinz Deeg.

For 10 days starting July 21, members of the Warner Barracks community could drop off toys, games and English-language books in the Army health clinic&#8217;s library, Sorenson said.

&#8220;This started when our former patient liaison officer [Mader] came and asked if we could get a few English-language books for the American children to read at the klinikum,&#8221; Sorenson said.

Sorenson immediately thought bigger. She posted fliers announcing a toy drive at the U.S. clinic and at Army Community Service, and set up collection bins.

Sorenson began storing the collected toys and books in a hallway of the clinic near the commander&#8217;s office, but as the collection grew, items had to be stored in one of the clinic&#8217;s exam rooms instead, she said.

In all, the toy drive brought in 20 stuffed animals and dolls, 20 games and puzzles and 350 English-language books for the pediatrics ward.

The clinic staff presented the items to Deeg at the klinikum on Aug. 22.

&#8220;On behalf of the children of the pediatrics clinic, I would like to thank the [Bamberg health clinic],&#8221; Deeg said in a translated statement from the presentation. &#8220;This will mean a great deal to the children.&#8221;

It certainly didn&#8217;t take long for the patients in the pediatric ward to discover the toys.

&#8220;The day of the presentation, children were coming down and digging through the toys,&#8221; Sorenson said. &#8220;I think this will really help the kids out during their hospital visits.&#8221;