Toys for Tots kicks off campaign on Okinawa 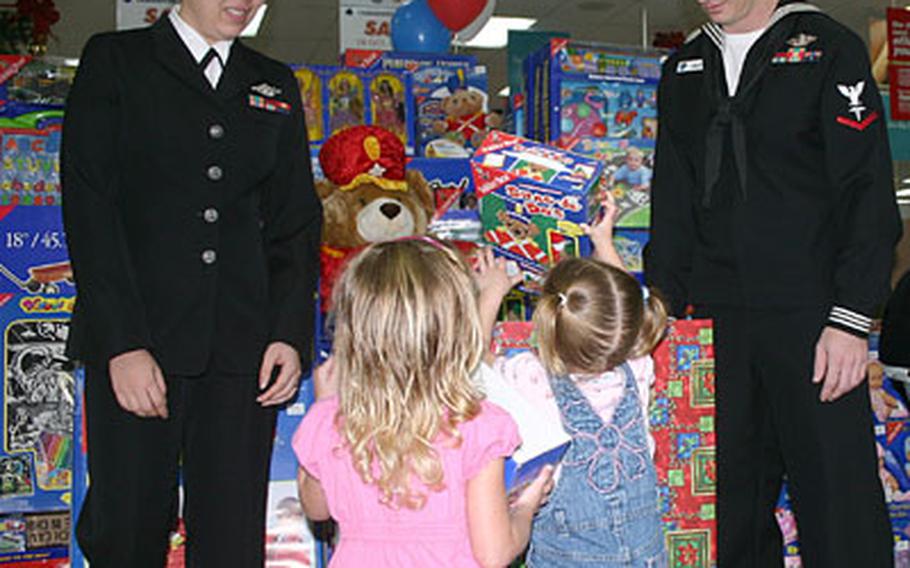 Hannah Silva, right, 3, and her sister Hailey, 2, donate some of the first toys to the Marine Corps Reserve Toys for Tots campaign on Okinawa after the opening ceremony at the Camp Foster main exchange. Petty Officers 3rd Class Nina Kovacs and Christopher Colley volunteered to be the first to man the donation boxes. (Cindy Fisher / S&S)

CAMP FOSTER, Okinawa &#8212; Camp Foster main exchange patrons made the first toy donations to the Marine Corps Reserve Toys for Tots on Okinawa on Saturday during the program&#8217;s kickoff ceremony.

Military families and local charities here will benefit from the program as will deprived children in the Philippines, Guam and Thailand.

Donated toys should be new and unwrapped for newborns to 18-year-olds. The program is hoping for more toys for older kids this year, Smith said.

Since 1947, the program has donated millions of toys &#8220;to boys and girls who might not otherwise be able to celebrate&#8221; the holiday season, said Lt. Col. David Edson, the Toys for Tots coordinator, to Foster exchange patrons at the opening ceremony as he urged them to donate.

Donation boxes will be at all Marine Corps camp exchanges as well as the Kadena Air Base exchange. People also can drop off donations at the Navy Federal Credit Unions here, base chapels and at their command sergeant major&#8217;s office.

Toys for Tots will be at several events over the next two months including Camp Foster&#8217;s Family Readiness Exposition on Nov. 17, and Kadena&#8217;s Tinsel Town and Camp Courtney Christmas Festival in early December.

The campaign&#8217;s culminating event is the Ho Ho Express scheduled for Dec. 15. That day, the Green Line will go from base to base collecting toys as AFN keeps a running tally and exhorts listeners to donate more, Smith said.

The goal will be to double to amount of toys that have been collected up to that point, she added.