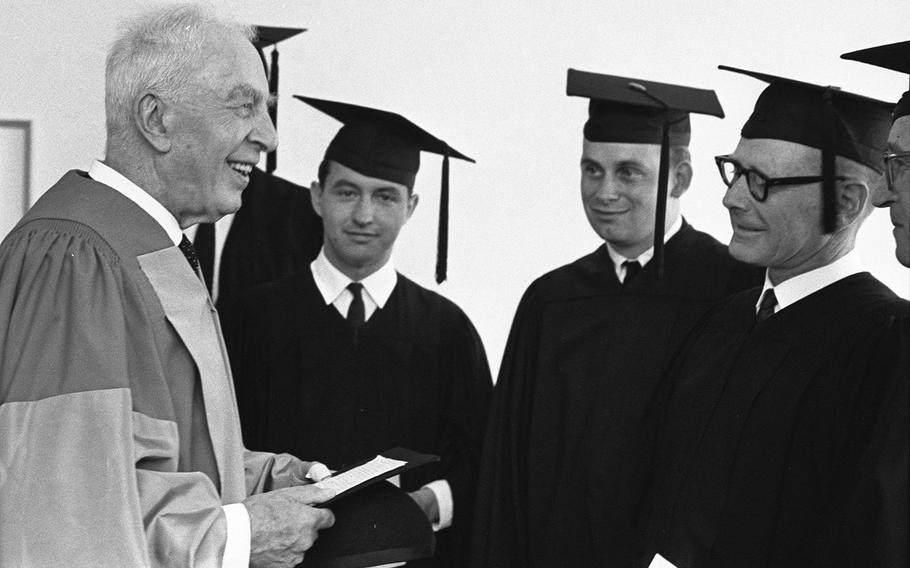 HEIDELBERG (S&S) — Historian Arnold Toynbee suggested to the University of Maryland graduating class Sunday that unless the United States and the Soviet Union find a way to cooperate, they will find themselves, in less than 40 years, confronted with a power more than a match for either of them: Communist China.

Toynbee was guest speaker at commencement ceremonies for 149 military and civilian students who received degrees at the university's European Division. The University of Heidelberg provided its Neue Aula for the event.

The historian, whose monumental "Study or History" is the English-speaking world's dominant expression of its kind of the century, had chosen for a topic "The Last Half-Century of World History in Retrospect." But the climax of the speech was not a revelation of the past, but his prediction for the future.

Europe, he said. is attempting through economic unity to become a "third force" between the United States and Russia.

"But the third force in the world today is not Europe, it's China," Toynbee said. "The future today rests jointly in the hands of America and Russia. If Russia and America were to agree to cooperate, they could stabilize the world in more or less its present partition.

"If they continue to frustrate each other, it is certain that by the year A.D. 2000, China, uniting under one government more than half the human rare, will dominate Russia, and the United States, and the rest of us."

Toynbee's address was the highlight of what must be one of the strangest graduation ceremonies of all American universities, in that the graduates received, along with their degrees. a cordial invitation to visit their alma mater at College Park, Md., some day.

Most of them had never seen it. August J. Nigro had earned his Ph.D and Roderick A. Stamey Jr. his M.A. at the College Park, Md., campus, but the rest of the students had attended classes at one or more of Maryland's many European campuses.

Still. it was a traditional commencement, complete to colorful robes and tasseled caps, and modern as the closed-circuit television over which a few persons who could not get seats in the Neuc Aula watched in an anteroom.

Prof. Klaus Schaefer, the prorector of the University of Heidelberg, welcomed the students by noting that it was with typical American practicality that the University of Maryland had found a way to educate soldiers during their time of service.

U. of M. President Wilson H Elkins took note of the unusual nature of the graduating class by calling it "the most married group of any receiving the B.A. degree.

"And the wives have not been just playing bridge," he said. "The average number of children Is 2.5: four have six children, and 17 have five."

The university honored Toynbee, as an "Olympian" whose "mind ranged over time and space in search of truth," with an honorary doctor of letters degree.