A U.S. soldier, wearing a mask to protect him from dust, clears earthquake rubble from Port-au-Prince in late February. (Seth Robson / S&S)

A U.S. soldier, wearing a mask to protect him from dust, clears earthquake rubble from Port-au-Prince in late February. (Seth Robson / S&S) 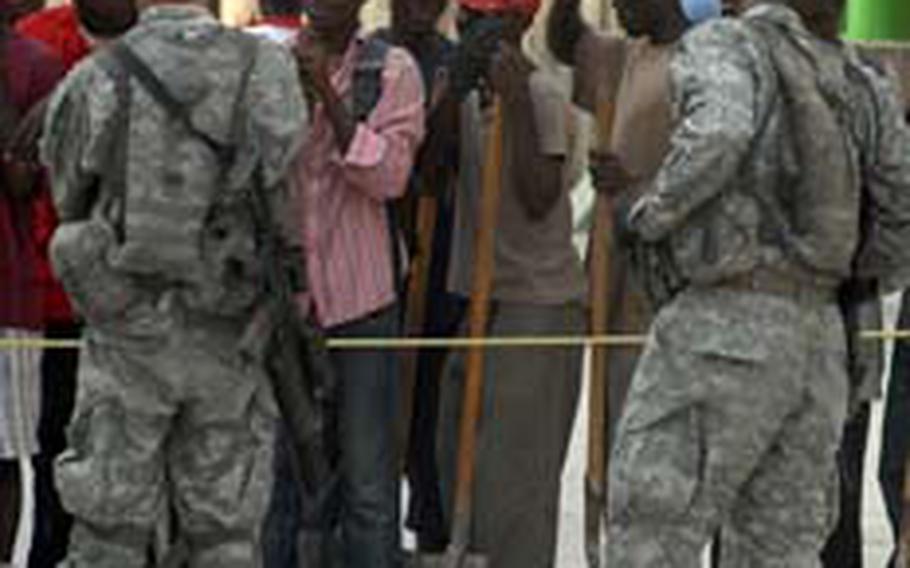 Air, water and soil samples taken from places where U.S. troops have been operating in Haiti do not contain high levels of toxic substances, according to the U.S. Southern Command.

The U.S. Army Center for Health Promotion and Preventive Medicine tested the hundreds of samples for some 200 contaminants, including silica and asbestos.

Teams from the Army, Air Force and Navy collected the samples from sites where U.S. military personnel have worked in Haiti since January&#8217;s deadly earthquake. Soldiers from the 82nd Airborne Division, who provided security for earthquake rubble removal in Port-au-Prince, have reported sore throats and coughing that they blame on dust inhaled on the job.

&#8220;We collected air samples from 31 locations to see if our guys were potentially breathing anything bad,&#8221; he said.

Contaminants present in the samples were at levels below those recognized as a risk under U.S. government standards, Milstrey said.

Hundreds of people are suing New York City over cancer diagnoses received after being exposed to dust while working at ground zero. The Associated Press reported that a judge on March 19 rejected a $575 million legal settlement for thousands of sick 9/11 responders in part because he thought it should contain more money for cancer victims.

The Army&#8217;s preliminary results suggest that asbestos levels found in dust from the Haiti earthquake are low enough that it would have been safe for soldiers to work without masks. The only place where a significant quantity of asbestos was detected in Haiti was at an AIDS clinic used by the U.S. Public Health Service, where an asbestos ceiling tile was discovered, Milstrey said.

Furthermore, testing of 14 wells used to supply shower water to troops in Haiti turned up quite a few contaminants, including harmful bacteria, that could be a health risk if the water was untreated, Milstrey said.

&#8220;The water there is very dirty &#8230; but, because our water was filtered using reverse-osmosis water purification, that filtered out most everything that was there,&#8221; he said.

No troops in Haiti have become sick from using the water, although there have been cases of food poisoning among personnel who ate local cuisine, he said.

Troops who served in Haiti are being screened for illnesses that might result from their service there, and they are being encouraged to talk to health professionals if they have concerns, Milstrey said.