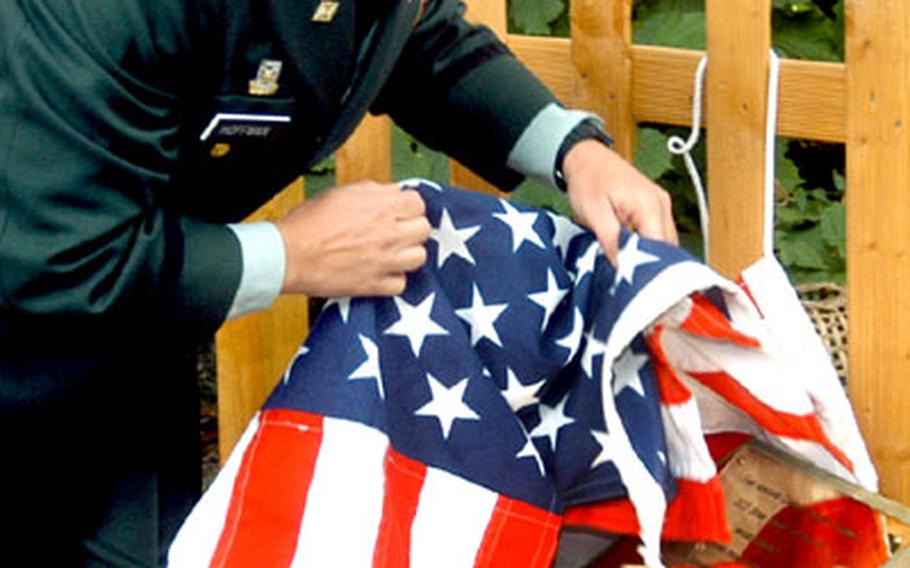 U.S. Army Maj. Barry Hoffman unveils a plaque in New Alresford during a ceremony Friday. The plaque honors Capt. Robert W. Cogswell, who guided his crippled B-17 away from the town 60 years ago. (Ron Jensen / S&S)

U.S. Army Maj. Barry Hoffman unveils a plaque in New Alresford during a ceremony Friday. The plaque honors Capt. Robert W. Cogswell, who guided his crippled B-17 away from the town 60 years ago. (Ron Jensen / S&S) 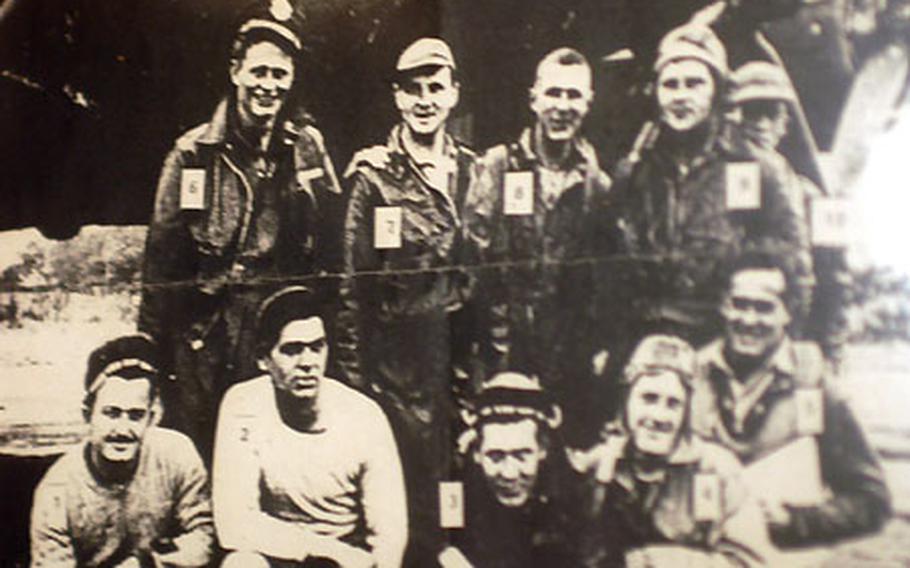 This photo of Capt. Robert W. Cogswell’s crew is displayed in The Globe on the Lake pub in New Alresford, England. Pictured with his crew, Cogswell, second from left in the back row, is credited with saving New Alresford from destruction by guiding his crippled B-17 Flying Fortress away from the town during World War II. Tech. Sgt. Eddie Deerfield, the bomber’s radio operator, is second from left in the front row. ()

NEW ALRESFORD, England &#8212; This town nearly in the shadow of Winchester&#8217;s grand cathedral in south England marked the 60th anniversary Friday of the day no one died.

It celebrated the day its buildings did not burn.

New Alresford unveiled a permanent marker to the memory of the American pilot who on Sept. 26, 1943, put his life at risk to guide his crippled, bomb-laden B-17 Flying Fortress named Lady Luck away from the town&#8217;s center.

Capt. Robert W. Cogswell, alone on the aircraft after ordering his crew to bail out, jumped to safety only after ensuring the plane would land away from houses, shops and people.

&#8220;Captain Cogswell represents the best of any officer and any soldier at the time of war,&#8221; said U.S. Army Maj. Barry Hoffman, who was invited by the town of 5,000 to unveil the marker on the shore of the lake near where Lady Luck crashed.

Len Pearce, 81, a local resident who remembers seeing the plane crash, said after the brief ceremony attended by about 50 people, &#8220;If it hadn&#8217;t been for that pilot, the middle of Alresford could have disappeared.&#8221;

Until last week, the only recognition for Cogswell in the town was a photo of the crew and a small plaque on the wall of The Globe on the Lake, a 17th century pub about 500 yards from the crash site.

The marker unveiled by Hoffman, an exchange officer serving with the Royal Army in Winchester, will be a permanent tribute to one man&#8217;s bravery.

Contacted Sunday at his home in Palm Harbor, Fla., where he lives in retirement after a career in journalism, international diplomacy and the Army Reserve, Deerfield said the bomber had flown from its home base at Molesworth, a base still in use by the U.S. Air Force. At the time, the base was home to the 303rd Bomb Group.

The target that day was submarine pens in Nantes, France, but bad weather caused the mission to be aborted, and the bombers of the 303rd, including Lady Luck, turned for home. On Cogswell&#8217;s plane, which was still carrying 10 500-pound demolition bombs, an engine caught fire.

Despite his best efforts, the pilot could not extinguish the flame.

Cogswell told the men to jump while Lady Luck was still at about 8,000 feet. Deerfield asked the pilot if they could ride it out, trusting their pilot&#8217;s skills to get them down safely.

The nine crewmembers jumped, leaving the pilot alone in the cockpit. Deerfield landed in a field and was immediately confronted by a pitchfork in the hands of a farmer who feared the falling parachutes signaled a German invasion.

Meanwhile, with Lady Luck losing altitude, Cogswell realized the plane was on a path directly into New Alresford, a town founded in about 1200. A major fire in 1689 destroyed much of the town and it was &#8212; and still is &#8212; thick with grand 17th century architecture.

As the airplane continued a quick descent, Cogswell stayed aboard until he was sure it would miss the town. Deerfield estimates that his commander jumped out as the plane was between 1,000 and 1,500 feet above the ground.

On the ground at this time, 6-year-old Fred White and his father and grandfather were watching. They saw the plane disappear behind the pub Th Globe on the Lake, and White, now 66, said he heard &#8220;a great big whomp!&#8221;

Nancy Farthing, now 85, was walking in the town center when she looked up.

Pearce was in the military at the time.

When the plane crashed at the side of a lake, the bombs did not explode, but the fuel burned. Had it crashed in the center of town, the damage would have been great.

For years, the town was really unaware of Cogswell&#8217;s heroism and its close brush with destruction. The town had had a front row seat for the Battle of Britain from 1939 and had witnessed the crash of many airplanes.

But over the years, the realization sunk in. The photo and plaque were placed in the pub in 1992.

Deerfield visited the town last year and wondered why the town had not done more to honor Cogswell, who risked his life and suffered an injury in his successful effort to save the town. That got the ball rolling and resulted in Friday&#8217;s ceremony.

The marker in the quiet garden behind the pub is a realization of that debt.

Deerfield kept in touch with Cogswell through letters and telephone calls after the war, including while both served in the Korean War.

Cogswell was piloting a B-29 bomber that went down in the Sea of Japan in October 1951. He was later listed as killed in action.