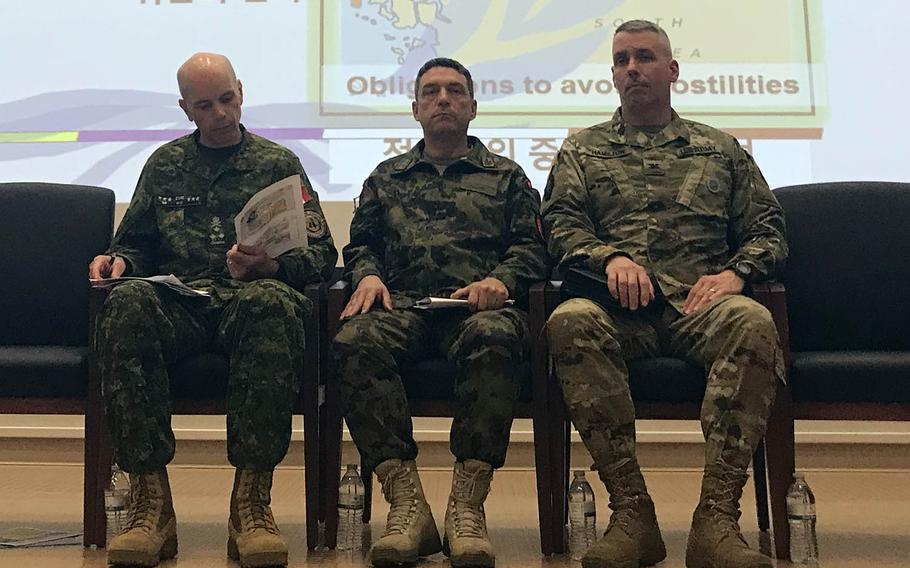 CAMP HUMPHREYS, South Korea — Tours to the southern side of the truce village that straddles the border with North Korea are likely to resume “in relatively short order,” the United Nations Command said Thursday.

But the UNC and the two Koreas still need to agree on a code of conduct before visitors will be allowed freedom of movement in the so-called Joint Security Area, which would fulfill a key part of a major inter-Korean military pact.

Canadian Lt. Gen. Wayne Eyre, the UNC’s deputy commander, said discussions with South Korea’s defense ministry were underway and he was hopeful that the tours could begin “in relatively short order.”

“Right now we are looking at opening up tours south of the military demarcation line in the new demilitarized JSA,” Eyre told reporters invited for a media day at the command’s new headquarters at Camp Humphreys.

“This will be done as an interim step until that code of conduct … is agreed to,” he explained.

In response to a question about whether North Korea appeared open to allowing mingling at the JSA, he said “not at this point.” But Eyre said the situation has improved markedly since the two sides disarmed security forces in the area in October.

“We are still in discussions with the ministry of defense and I’m hopeful we’ll have some announcements in the coming weeks and days,” he said.

“But I can tell you when you go up there you’ll notice a palpable reduction in tensions,” he added. “You can feel it. The tension is nowhere near the same as it was under the old system.”

South Korea has moved to improve relations with the North in tandem with a U.S. diplomatic offensive to persuade the communist state to abandon its nuclear weapons.

President Moon Jae-in and North Korean leader Kim Jong Un agreed to a “comprehensive military agreement” during their third summit, which was held in Pyongyang in September.

Implementing the accord is a top priority of the UNC, Eyre said Thursday while acknowledging challenges including a lack of response from the North Koreans and U.S.-led international sanctions that limit economic cooperation.

In a first step, military forces conducted mine clearance operations and removed firearms and ammunition from the heavily fortified area in the fall.

That prompted a suspension of the popular, tightly controlled tours in which visitors could stare into the other country and cross the border inside one of the iconic blue conference buildings.

The military pact called for tourists to be allowed to move about freely inside the JSA from 9 a.m. to 5 p.m.

But the ambitious plan has been delayed becuase of the inability to reach agreement on a code of conduct, which UNC officials said was vital to ensure the security of all involved.

South Korean media also have reported that talks were stalled due to the North’s demand that the UNC be excluded from the management of the area.

The UNC, which is led by Army Gen. Robert Abrams, oversees the JSA as part of the armistice agreement that ended the 1950-53 Korean War after the parties failed to reach a peace treaty.

The JSA, also known as the truce village of Panmunjom because the armistice was signed there, has been a flash point for violence as the only place where soldiers from both sides come face to face.

Two U.S. officers were killed by North Korean soldiers wielding axes during a clash over the cutting of a tree in 1976.

More recently, a North Korean soldier was shot several times as he fled across the border to defect to the South as tensions were high amid a spate of missile and nuclear tests by the North.

“When we came together in our trilateral talks we identified very rapidly that what was missing from the armistice signing was a … code of conduct,” said Army Col. Burke Hamilton, secretary of the UNC’s military armistice commisson.

“So I would say that is the one obstacle that we’ve had,” he said.

“I think we’re very, very close to identifying what’s acceptable for three different parties for a code of conduct that will ensure that there’s safety for all the personnel that work within JSA … and of course for the security forces that will be in there unarmed,” he added.