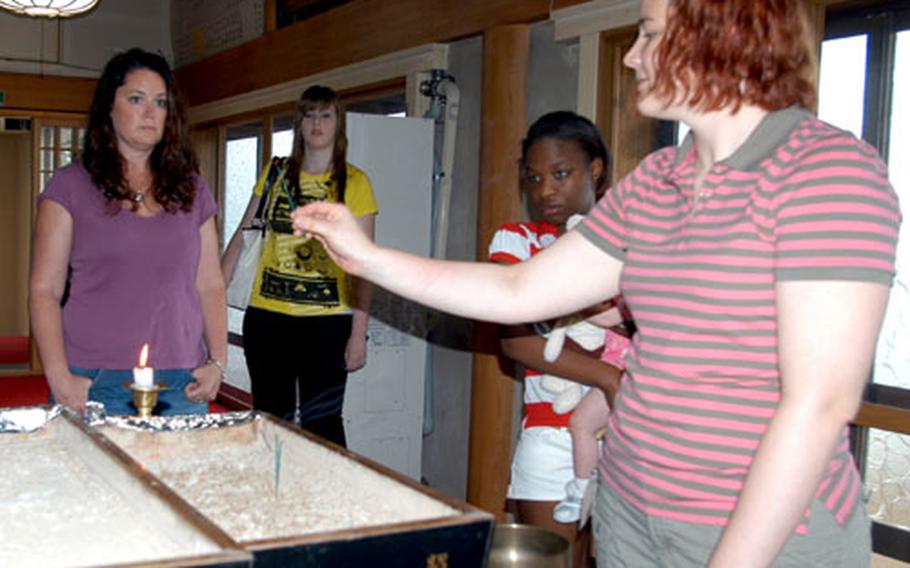 Jenni McIntyre, foreground, shows newcomers to Misawa the tradition of lighting a stick of incense in a Buddhist temple. A volunteer tour guide for the Airman and Family Readiness Center&#39;s local city tours, McIntyre encourages people to explore off base as much as possible. (Jennifer H. Svan / S&S)

American newcomers tooling around Misawa on a bus one recent Thursday are privy to information that might otherwise take years of living in Japan to figure out.

They learn that the local grocery store, Yokomachi, sells fruits and vegetables for 100 yen on Tuesdays, that the pink sushi house has the reputation for the best sushi, and if they get lost, follow signs to Aeon, a popular department store in Japan usually found in populated areas, near familiar landmarks.

"Please go explore. Don&#39;t be afraid to &#8230; park your car and just walk around," Jenni McIntyre encourages the group of military families and single servicemembers from her spot at the front of the bus.

McIntyre, 25, is one of several volunteer tour guides for the Airman and Family Readiness Center at Misawa Air Base in northern Japan. She lends her expertise to the Misawa city and Hachinohe tours, held every week and mandatory for active-duty members new to Misawa.

But the military spouse and mother from Dallas got off to a late start.

Her guide on her newcomers&#39; tour "told us it was scary to go off base," McIntyre said. "I spent the first six months avoiding off base but came to find I liked it a lot better than on base. You don&#39;t get to learn about Japan if you don&#39;t go off base."

For the wide-eyed newcomers on her tours, she tries to take the fear out of going off base.

Airman and Family Readiness Center officials say they hope that after taking the tour, new arrivals will be more comfortable exploring Japan on their own.

A cultural briefing on the tour hits topics ranging from what kind of flowers to give someone in the hospital to proper bathhouse etiquette.

Incoming personnel in Stuttgart, Germany, are required to attend a "head start" program.

"We teach them basic German phrases that they might use when going to a restaurant or buying a train ticket," said Robert Quigley of the military community&#39;s Central Processing Office. The class is held every other Tuesday, and the next day offers an optional trip to downtown Stuttgart. They take the German bus and train, forcing the newcomers to get around like the locals.

Both said they have picked up enough German to ask for basic information such as directions. "The Germans, a lot of them speak English, so they understand you," Perreault said.

At Yokota Air Base near Tokyo, the Airman and Family Readiness Center offers a 10-week cultural course, with one off-base activity planned every week.

"We partner with some Japanese volunteers from downtown," said Sam Smith, a community readiness consultant with the center. "As a group they go to baseball games, go out to a couple local restaurants. They develop activities they can do together."