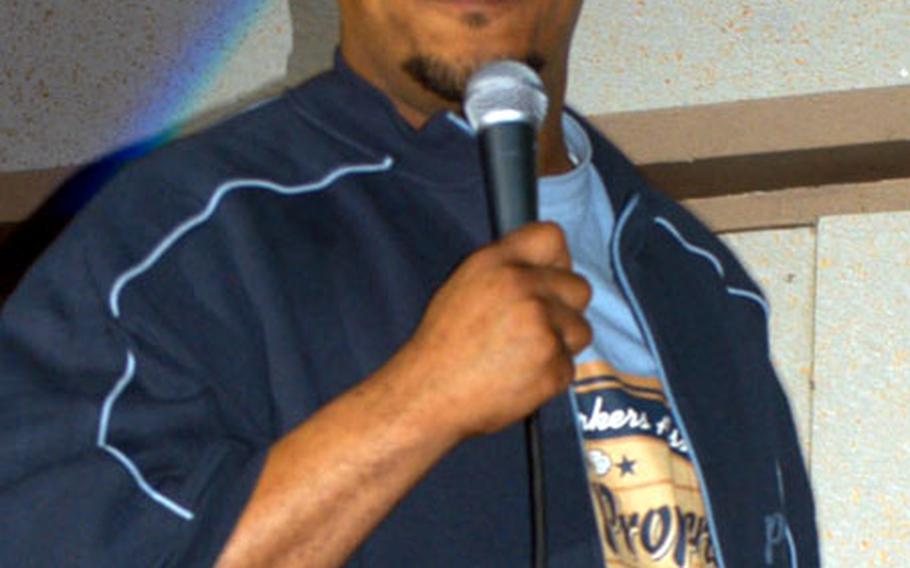 CAMP STANLEY, South Korea &#8212; Guarding Freedom&#8217;s Frontier is a deadly serious business but a group of touring U.S. comedians is helping troops stationed near South Korea&#8217;s Demilitarized Zone see the lighter side of their job.

U.S.-based comedians Tommy Davidson, Joe Torry and Hurricane Andrew performed at Camp Stanley on Thursday night and were to perform at Rodriguez Range on Friday night. The tour is the first of four by U.S. comedians to U.S. bases in South Korea planned by Morale, Welfare and Recreation this year.

The comedians were right at home among the soldiers.

Torry said he was born at an Army base in Newport, Va., which since has closed.

There is plenty to laugh at in South Korea, Torry said.

Davidson indicated he also was at home on military installations, having performed at U.S. bases in England and Germany.

Performing in South Korea felt like performing at home, he said.

&#8220;Most of the soldiers who are abroad ... are just guys and girls from all the urban and rural parts of the U.S. Those are people I identify with anyway, so it is just like performing at home.

&#8220;I know they are here under extreme circumstances. These people are so far from home, and they don&#8217;t have the opportunity to see the type of entertainment we provide,&#8221; he said.

Professional comedians also travel a lot, he said: &#8220;It never really stops. Unless you can get yourself a solid foundation as a film or television star, stand-up is a way to make a living.&#8221;

Area I entertainment director John Antes said MWR hopes to get more U.S. entertainers to come to South Korea this year. Last year there were 1,054 shows in Area I, including 54 celebrity shows, he said.