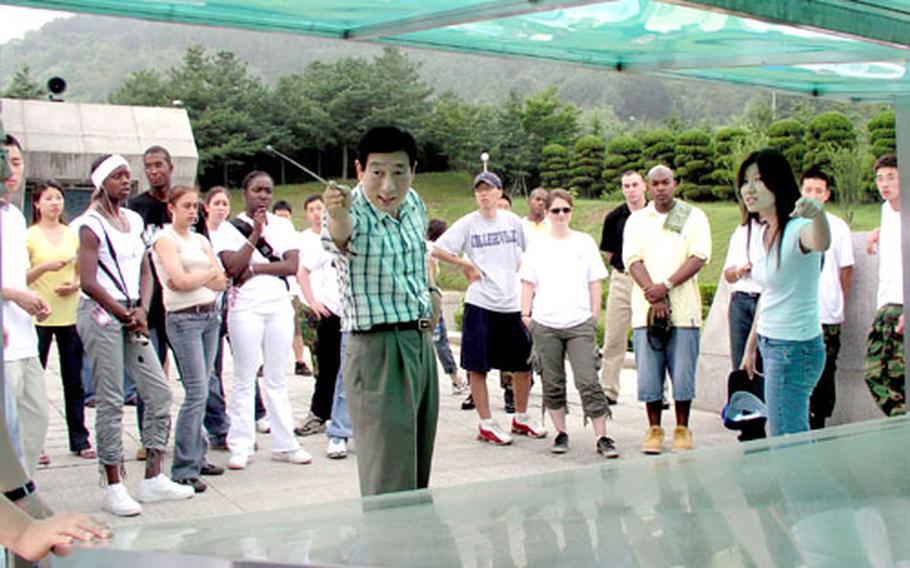 At Dabudong battlefield monument near Waegwan, South Korea, soldiers and college students listen as a monument official uses a glass-encased model of the battle area to explain how South Korean and U.S. troops prevented North Korean invasion forces from breaking through to Daegu in 1950, in the Korean War&#39;s early months. (Franklin Fisher / S&S)

Nor had he met a South Korean military hero.

But that changed earlier this week when he and other U.S. soldiers in Daegu took part in a two-day event aimed at promoting the U.S.-South Korea military alliance and friendship between the two countries.

The Korean-American Partnership Association hosted the event in conjunction with the U.S. Army&#8217;s 19th Theater Support Command in Daegu. It was held one day after the 52nd anniversary of the armistice ending the 1950-53 Korean War.

Fifty-one U.S. and South Korean soldiers were guests for what KAPA called its first Korean-American Alliance and Friendship Tour.

Tuesday, the soldiers and students toured two local factories for a look at Daegu&#8217;s textile industry. That evening, they heard a lecture on the Korean War from retired South Korean Gen. Paik Sun-yup. Paik is his nation&#8217;s most prominent Korean War military hero, a former chairman of its joint chiefs of staff and a former ambassador to Taiwan, France and other countries.

Wednesday&#8217;s tours included a stop at the Dabudong battle monument and its view of the steep ridges and hilltops where South Korean and U.S. forces won a desperate battle to block the North Koreans from capturing Daegu in 1950.

One highlight for many of the soldiers came during Tuesday&#8217;s steak and lobster dinner, when Daegu&#8217;s Onuri dance troupe &#8212; including some small children &#8212; performed traditional Korean dance, leaping and swirling in traditional costumes while accompanying themselves on gongs, cymbals and drums.