Upon entering Germany on Friday, cyclists in the Tour de France will pass by this display just outside of Wintersdorf on their way to the end of stage seven in Karlsruhe. (Steve Mraz / S&S)

Upon entering Germany on Friday, cyclists in the Tour de France will pass by this display just outside of Wintersdorf on their way to the end of stage seven in Karlsruhe. (Steve Mraz / S&S) 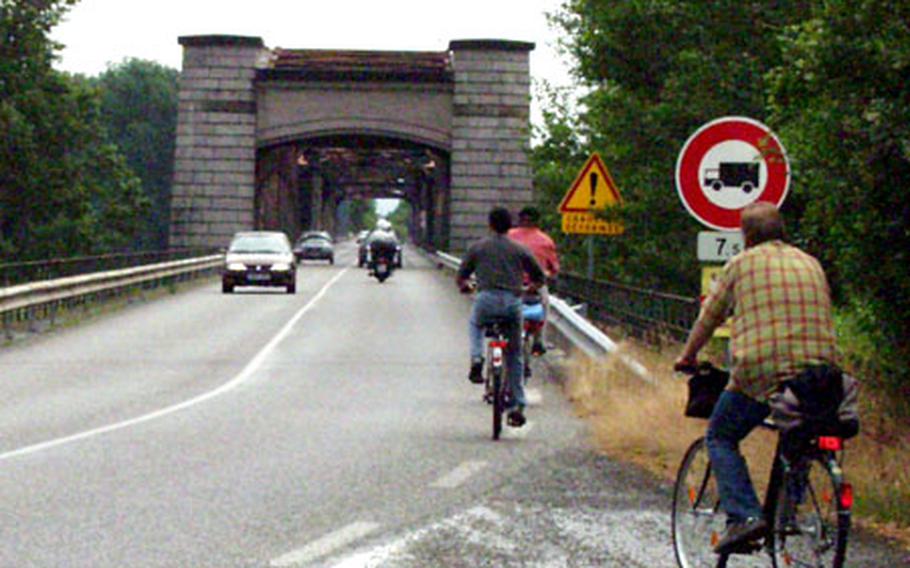 Cyclists in the Tour de France will enter Germany over this bridge Friday afternoon on their way to Karlsruhe. (Steve Mraz / S&S) 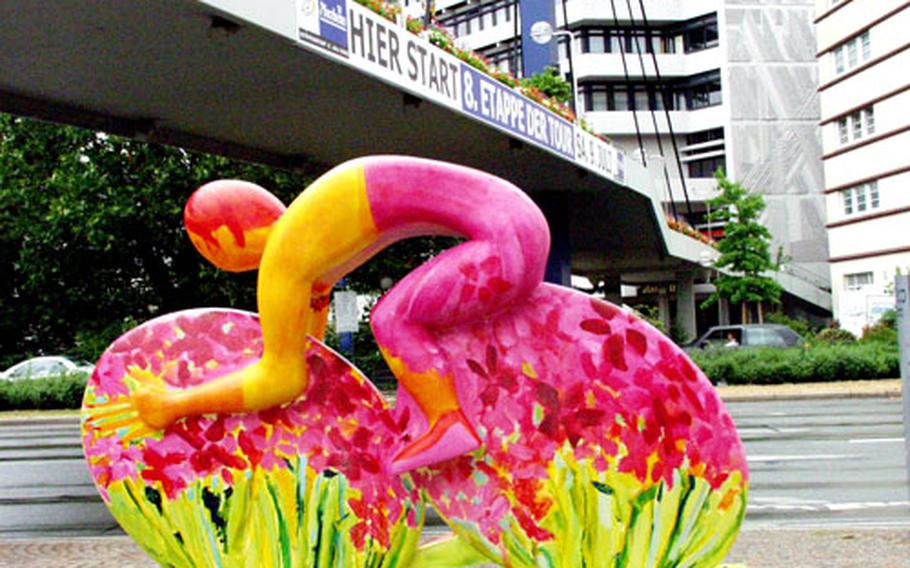 On Saturday, real cyclists in the Tour de France will be lined up at the starting line on Zerrennerstrasse in Pforzheim, Germany. (Steve Mraz / S&S)

While that is not unique, it is rare. The last time the tour wound through the German cities of Karlsruhe and Pforzheim was in 1987.

What is unique is that this should be the final year American Lance Armstrong will be racing. He is trying to win a record seventh-straight tour, and has vowed it will be his last.

The two towns are within a relatively short drive of Americans stationed between Wiesbaden and Stuttgart, and between Heidelberg and Kaiserslautern. From Kaiserslautern, it is less than two hours by car.

Seeing Armstrong, who remained in second place Sunday after two days of the 23-day race that ends July 24 in Paris, would be one of those stories you could work into any conversation &#8212; if you really try.

On Friday, the 200-plus cyclists will cross the Rhine River into Germany around 4:30 p.m. The racers will speed through the towns of Iffezheim, Rastatt and Ettlingen on their way to the stage seven finish in Karlsruhe.

From there, the course takes the riders past agricultural fields and through the charming town of Rastatt until its culmination in Karlsruhe, the birthplace of the bicycle.

Pallasch advised spectators to get to the course by early afternoon to ensure a good vantage point.

If you can&#8217;t make the race on Friday, head to the Black Forest town of Pforzheim on Saturday morning to catch the start of stage eight. The stage starts at 11:30 a.m. on Zerrennerstrasse in downtown Pforzheim and winds through some nearby streets before plunging into the forest.

Again, large crowds are expected. Maike Dornbach, a trainee at the Pforzheim tourist information office, said spectators should get to the course early if they want to see the beginning.

The alternative is to get a spot farther down the course, Dombach said.

While the German portion of Friday&#8217;s course is relatively flat, riders must be ready for a healthy climb about seven kilometers (4.3 miles) into Saturday&#8217;s stage. Once the cyclists hit the 702 meter-high point (2,300 feet) in Dobel, it&#8217;s more or less downhill for the rest of their ride in Germany. Riders will then cut through such locales as Baden-Baden, Achern, Offenburg, Kippenheim and Kenzingen on their way to the finish in G&#233;rardmer, France.

Wherever you end up on the circuit, be on the lookout for Armstrong during the race. Hopefully, he&#8217;ll be the one wearing the yellow jersey.