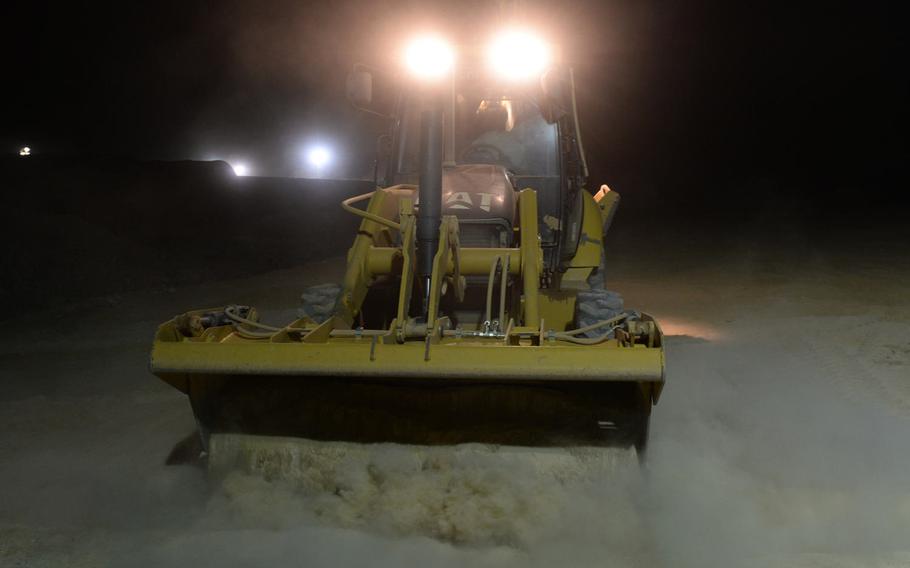 An Airman dumps dirt over an electrical line with a Backhoe Loader at Nigerien Air Base 201, Niger, May 9, 2017. (Jimmie D. Pike/U.S. Air Force)

An Airman dumps dirt over an electrical line with a Backhoe Loader at Nigerien Air Base 201, Niger, May 9, 2017. (Jimmie D. Pike/U.S. Air Force) 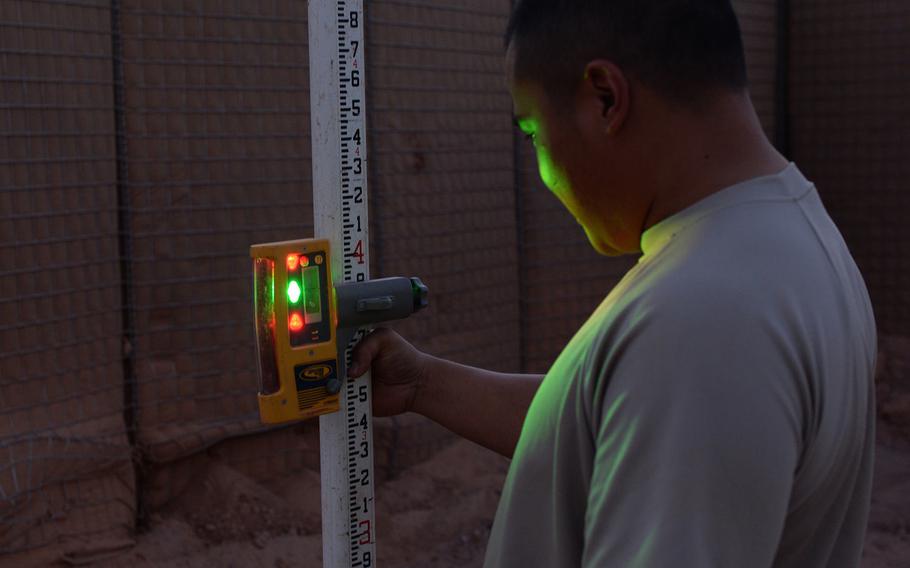 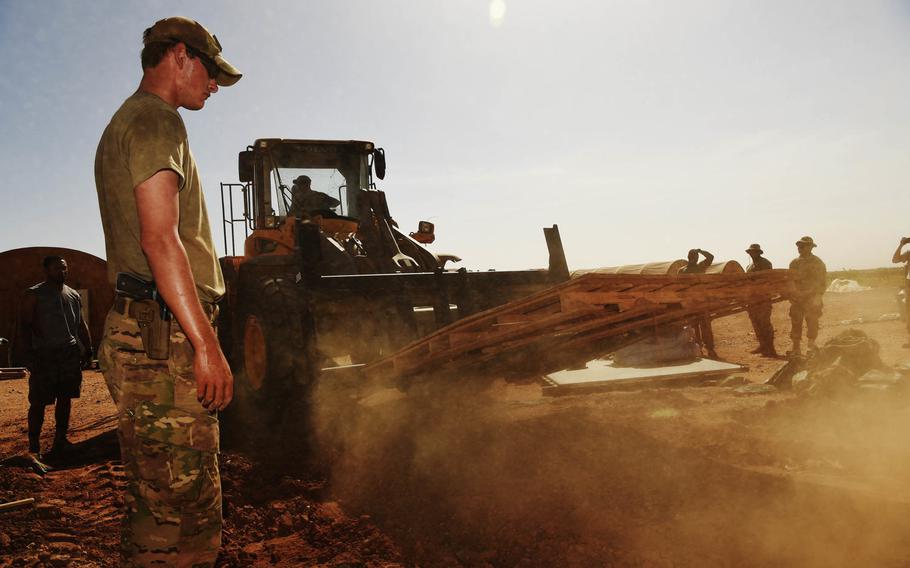 Airmen from the 724th Expeditionary Air Base Squadron and soldiers from the 411th Military Police Company tear up wooden pallets during a move to a new location at Air Base 201, Agadez, Niger, Sept. 11, 2017. (Joshua Dewberry/U.S. Air Force) 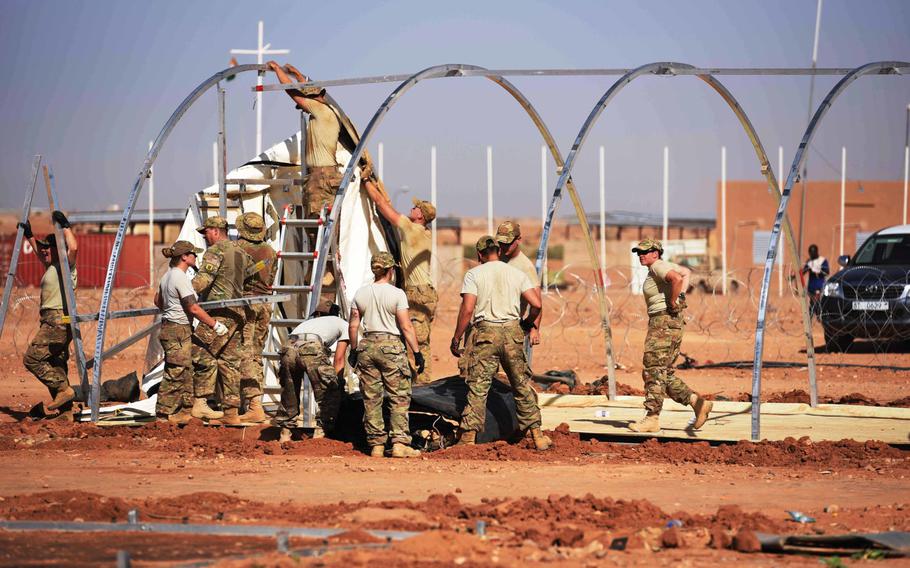 Airmen from the 724th Expeditionary Air Base Squadron take down tents at Air Base 201 in Agadez, Niger, to move to a new location Sept. 11, 2017. (Joshua Dewberry/U.S. Air Force)

U.S. operations at a new base in Niger will be delayed a year as work crews battle dust storms and logistical obstacles to complete one of the Air Force’s largest troop labor projects in history, military officials said.

U.S. Africa Command initially expected to finish upgrading the facility in Agadez this year, but operating in the rugged and isolated terrain of central Niger has proved challenging.

“Estimated completion is 2018 due to logistical challenges with constructing an air base in the Sahel desert,” said Samantha Reho, an AFRICOM spokeswoman.

The site that will host U.S. forces, known as Air Base 201, is technically a Nigerien outpost, but the U.S. is spending some $100 million to overhaul it. A flight line is under construction, along with living quarters and mission support buildings.

“We’re in the very early stages right now of establishing a presence in the area, but one day this once empty desert will be a fully functioning flight line,” said 1st Lt. Danielle Tabb, a civil engineer on the Agadez project.

The base, now expected to open in mid-to-late 2018, will eventually be a hub for U.S. surveillance operations in the region. It may also serve as a base for armed drone strikes if U.S. and Niger authorities reach an agreement to allow such flights.

Since the Oct. 4 ambush in Niger that left four soldiers dead, politicians and military officials have questioned whether more air and other support is needed for troops patrolling territory where numerous violent extremist groups are active.

AFRICOM wouldn’t confirm whether it was in talks to arm its unmanned aircraft operating out of Niger. But CNN and other news media, citing unnamed U.S. officials, reported that talks between the U.S. and Niger about conducting armed flights have taken on a sense of urgency.

During the Oct. 4 attack on a 12-man U.S. special operations team on patrol with Nigerien forces, an unarmed U.S. surveil-lance drone was on the scene within minutes after being called for support, military officials have said. Two hours after the attack, French aircraft also were on the scene, but they did not fire because it was difficult to distinguish targets.

Work at the base in Agadez is being overseen by the 724th Expeditionary Air Base Squadron, which also has the support of Navy Seabees and Army military police. The effort is “projected to be the biggest military labor troop project in U.S. Air Force history,” the Air Force said in a recent statement.

The crews have faced numerous obstacles in building up a base under austere conditions.

“Logistics are the biggest challenges by far,” said Maj. Carsten Stahr, 724th EABS director of operations, in a statement. “We’re in the Sahel, so we deal with anything from daily temperatures over 100 degrees, long shipping times for supplies, little to no infrastructure nearby, malaria, etc.”

The U.S. has 800 troops operating in Niger, making the country host to the second-largest contingent of forces in Africa.