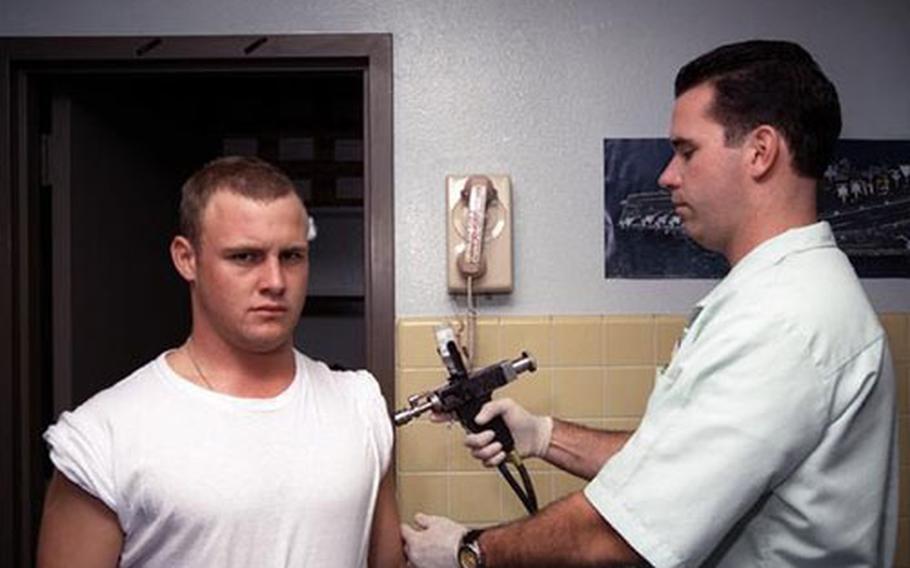 A Recruit from Company 215 stares solemnly as he receives shots during the first few days of boot Camp. Company 215 is the last company to graduate from Recruit Training Command, San Diego. (Courtesy of Defense Visual Information Network)

Navy boot camp changes giving recruits more sleep and less marching are generating buzz among members of other services, particularly the Marine Corps, which prides itself on having the toughest basic training.

The Great Lakes Naval Training Center in Illinois recently announced a slew of changes at the Navy&#8217;s only boot camp.

Kitchen duty is a thing of the past and barracks galleys will replace dining halls.

But GIs across the Pacific say boot camp is supposed to be tough and question whether the Navy&#8217;s new approach is too soft.

Every Marine recruit must pass the &#8220;Crucible,&#8221; a test that involves marching about 40 miles over 54 hours with food and sleep deprivation. Marine Corps officials say recruits will be able to draw upon the experience to face any future challenge.

Lt. Ralph Roe, a former enlisted sailor now serving as the officer in charge of the Space and Naval Warfare Systems Command detachment at Sasebo Naval Base, Japan, doesn&#8217;t remember marching much when he went through boot camp in 1979.

Roe said many aspects of boot camp did not make sense to him at the time, but now, 25 years later, he understands why those things were done.

Boot camp should be where the Navy gets the &#8220;kid out of the kid,&#8221; said Havens, a 1964 boot camp graduate and chief of Mobility Readiness Support at Sasebo Naval Base&#8217;s Fleet and Family Support Center.

&#8220;To my mind, such a drastic reduction in the effort and physical inconvenience of boot camp training will ill prepare these young men and women for the realities of the cramped habitability conditions to be found on most Naval vessels,&#8221; Havens said. &#8220;The Navy seems to be heading the way of the Air Force in child-proofing the boot camp environment.&#8221;

On the lighter side

The Air Force, on its basic training Web site, www.baseops.net/basictraining/airforce.html, tells recruits to prepare for &#8220;extensive marching, conditioning classes and the completion of a challenging obstacle course.&#8221;

Airmen at Yokota Air Base, however, don&#8217;t recall basic training being physically demanding.

The airmen recall getting plenty of sleep &#8212; about eight hours &#8212; despite early morning wake-up calls. They also recall lots of food.

But airmen agree the Air Force probably has the easiest basic training.

In the Army, officials say a typical boot camp schedule calls for wake-up at 5:30 a.m. and lights out at 9 p.m.

Pfc. John Kim of 8th Army&#8217;s headquarter and headquarters company said the three to four hours of sleep during Army basic training can wear a soldier down. Kim got out of basic training at Fort Jackson, S.C., in August. But he agrees that the Army should push a soldier to the limits.

Pfc. Jigar Jani, 19, said he&#8217;d never gotten up so early in his life, and that was one of the hardest things to adjust to in the Army.

During basic training, soldiers still perform mundane tasks such as kitchen duty, and it&#8217;s that duty that caused Jani to miss a class on care of his M-16 rifle.

Sgt. 1st Class John Cothron, who was a drill sergeant at Fort Jackson from 1997 to 2000, said a company usually has kitchen duty eight times, with each platoon doing it twice all day.