Tortuga crew gets shipshape to win Shelves are now stocked with apple sauce, dried fruit and oatmeal at the store aboard the USS Tortuga, which is stationed at Sasebo Naval Base. The healthy snack corner is one of several new initiatives meant to help the crew stick with healthy lifestyles. (Photos by Travis J. Tritten / S&S)

Shelves are now stocked with apple sauce, dried fruit and oatmeal at the store aboard the USS Tortuga, which is stationed at Sasebo Naval Base. The healthy snack corner is one of several new initiatives meant to help the crew stick with healthy lifestyles. (Photos by Travis J. Tritten / S&S) 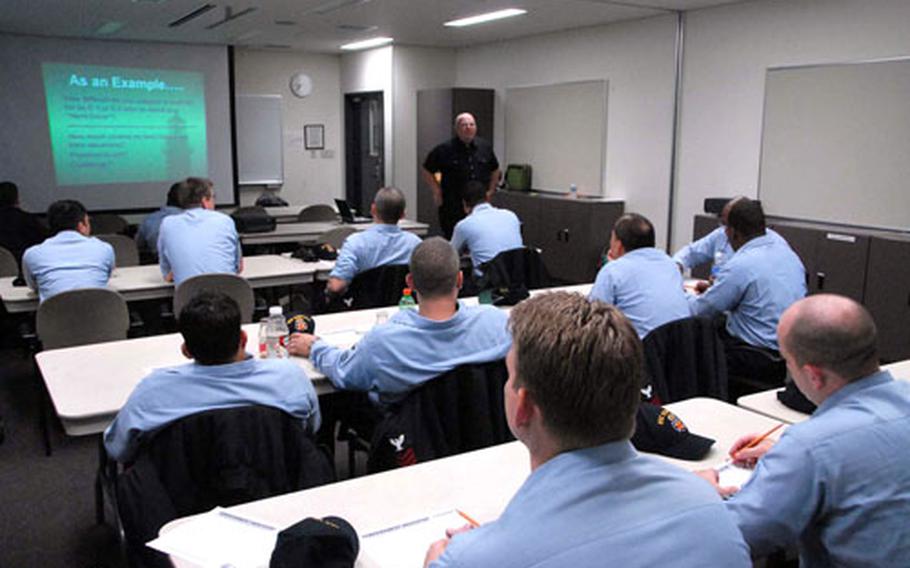 Sailors from the Sasebo-based USS Tortuga learn how to stay healthy and happy at work during a life-skills seminar by Jerry Havens. The seminar was sponsored by the Tortuga and the counselors at the Fleet and Family Support Center at the Sasebo Naval Base. The ship&#39;s medical staff also created health competitions and education programs to keep the crew&#39;s weight down and their health up. ()

SASEBO NAVAL BASE, Japan &#8212; Sometimes losing is the only way to win, at least for Lt. Nazima Kathiria and some sailors aboard USS Tortuga.

In the battle against expanding waistlines, the ship&#8217;s medical team has made excess weight loss a team sport and winners get cash prizes.

The competition is modeled after &#8220;The Biggest Loser&#8221; television show and was part of new initiatives to keep the crew healthy during fall patrol, said Kathiria, the Tortuga&#8217;s doctor.

If you lose the most pounds, you win cash money or a gift certificate for the ship store.

Working at sea for weeks at a time often causes stress and weight gain, Kathiria said.

But she said providing sailors with opportunities such as the competition and some education are keys to keeping a healthy lifestyle.

Most of all, Tortuga sailors say the new health initiatives are working.

It was the most weight loss for any one of the 22 sailors who competed this fall.

His team, called Team Rock Bottom, lost a total of 64 pounds among its 11 members, according to Petty Officer 3rd Class Sara Settle, who was part of the team.

It&#8217;s not all about weight loss on the Tortuga; sailors and Marines can also test their strength and endurance.

The ship holds bench press, shuttle run and other competitions that pit the two services in friendly competition, said Petty Officer 2nd Class Lamarques Ogans, a hospitalman who coordinates morale and recreation events on the ship.

Diet also is important to staying fit and Tortuga sailors now have more healthy food choices when they go to the ship store, Kathiria said.

&#8220;When there is something healthy staring you in the face, you have that extra edge,&#8221; Kathiria said.

Each month also has a featured fruit and vegetable to keep sailors aware of healthy food choices.

The Tortuga medical staff has a comprehensive approach including seminars on dental health and safe sex, physical fitness competitions and public service spots on the ship&#8217;s closed-circuit television system.

Keeping sailors&#8217; weight down and educating them on proper diet and exercise can save them from medical troubles such as heart disease and diabetes down the road, Kathiria said.