Toronto Raptors put on a show for Italy troops 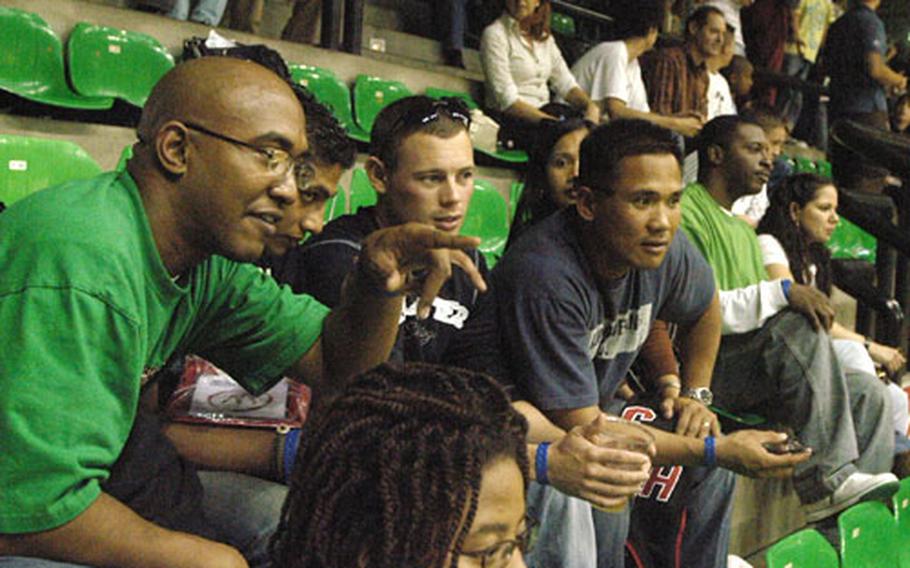 Staff Sgt. Rod Knox points out something on the court to fellow members of the 31st Civil Engineer Squadron during a scrimmage by the Toronto Raptors at the Palaverde in Treviso, Italy. The NBA invited members of the Aviano and Vicenza military communities to check out the action. (Kent Harris / S&S)

TREVISO, Italy &#8212; The National Basketball Association gave members of the Aviano and Vicenza military communities a chance to feel &#8220;FAN-tastic.&#8221;

Five buses full of U.S. troops took in a preseason scrimmage Wednesday night by the Toronto Raptors at Palaverde &#8212; home of the Benetton Treviso basketball club.

Sgt. Olasupo Sobomehin wore a Raptors jersey &#8230; and not just in an attempt to get some face time with the players.

It&#8217;s been an even longer period for Greg Hall, who works for the Army and Air Force Exchange Service in Vicenza.

He got the opportunity thanks to the NBA, which offered about 100 free passes to both military communities. Three buses came from Aviano and two came from Vicenza.

The game itself amounted to an intrasquad scrimmage between a team wearing gray jerseys and another with black uniforms. The gray squad, led by star forward Chris Bosh and former No. 1 draft pick Andrea Bargnani, ended up prevailing, 105-96. The Raptors, who arrived in country on Sept. 29, were to travel to Rome, where they&#8217;ll take on the Boston Celtics in a preseason game on Saturday.

The Memphis Grizzlies and Minnesota Timberwolves also are opening their preseason in Spain and Turkey, respectively, this year.

&#8220;Through NBA Cares, we want to grow the sport of basketball around the world,&#8221; said Helen Wong, director of international communications for the league.

She said the offer of free seats to the troops and their families was a way of saying thanks from the NBA.

&#8220;We&#8217;d like to thank you for coming out, especially the troops who are stationed here,&#8221; Bosh told the crowd before the scrimmage started.

Bargnani, who grew up in Treviso, and Spain&#8217;s Jorge Garbajosa, another former Benetton standout, got the largest ovations from the fans before the contest. All the players stayed on court afterwards to sign autographs and meet the fans.