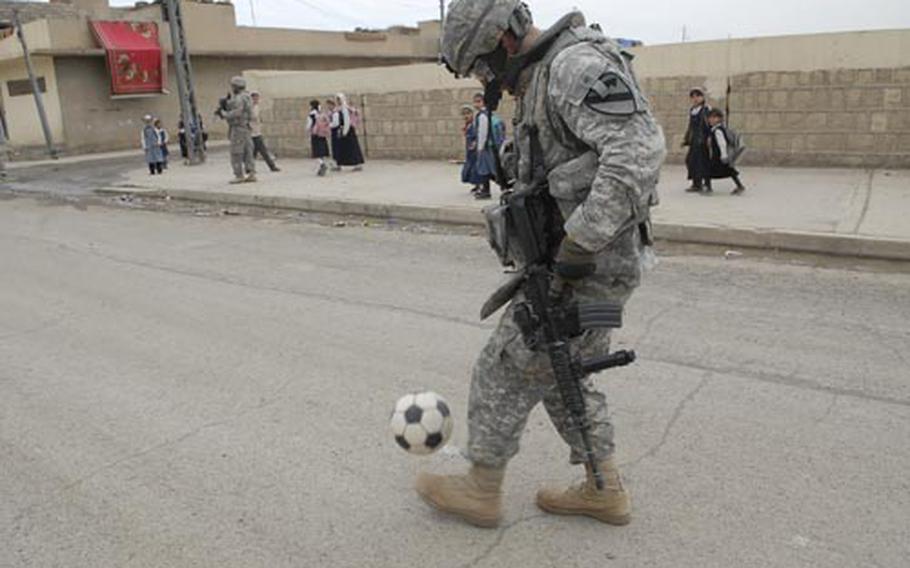 First Lt. Alexander Mullin juggles a soccer ball in the streets of Mosul. Mullin has an invitation to join the U.S. National Team Handball squad and potentially play in the 2012 Olympics but he is trying to figure out if he can join the team while staying on as his platoon’s leader in Iraq the rest of his tour. (Heath Druzin/S&S)

MOSUL, Iraq &#8212; When Iraqi children kick the ball to U.S. troops in this soccer-mad country, the Americans usually muff a pass or wildly blast a shot back.

But in the gritty streets of Mosul, 1st Lt. Alexander Mullin puts on a dribbling clinic, expertly juggling the ball from foot to foot in full battle gear as children look on, mouths agape.

For now, though, Mullin, of the 3rd Heavy Brigade Combat Team, 1st Cavalry Division, leads a platoon of soldiers through some of Iraq&#8217;s most dangerous neighborhoods in the insurgent stronghold of Mosul.

"It&#8217;s pretty much my dream, doing this," he says while riding down a sewage-filled street in an armored truck.

Mullin, a tall, easygoing Texan, went to West Point hoping to play soccer, but was cut from the team. He soon moved onto rugby and excelled at the rough and tumble sport, but he blew out his knee. He avoided surgery but doctors warned him he would not be so lucky if he suffered another similar injury, so he looked for a sport with less contact and stumbled upon handball at the suggestion of a friend.

At age 21, he picked up a sport he knew little about, a six-on-six game played on a basketball court &#8212; part lacrosse, part soccer, popular in Europe and virtually unknown in the United States.

"I have to explain the sport to some people," Mullin said.

Mullin caught on quickly and his senior year, the high-scoring right wing was named captain and led West Point to the national championship game, where they beat the University of North Carolina for the title.

Around that time, Mullin received an invite to play on the U.S. national team, which meant a chance to go to the Olympics (though the U.S. team was eventually knocked out in qualifying).

Mullin was still busy with his studies at West Point and declined the offer.

Now he has another invite to the national team, with the chance to play in the 2012 games in London. The Army has given its blessing for him to join the team while staying on active duty, but he&#8217;s still working out one vital detail: whether he&#8217;ll be able to complete his Iraq tour as a platoon leader.

"I decided that after all the training I had done with my platoon, I wanted to be [here] in Iraq with them. I didn&#8217;t want anyone else leading my guys," he said.

For now, Mullin&#8217;s superiors say he must relinquish control of his platoon and take a staff job if he wants to compete with the national team, a prospect that doesn&#8217;t sit well with him.

His soldiers say they appreciate Mullin&#8217;s loyalty, but encourage him to grab his opportunity.

"Go for the gold!" Sgt. John Thompson yells when he hears Mullin discussing his options.

"The [chance to compete in the] Olympics come once in a lifetime," he said.

Mullin hopes he can work out a compromise that lets him stay on as platoon leader and still compete but he made clear his priority: "If it came down to it, I would choose sticking with my guys any day."